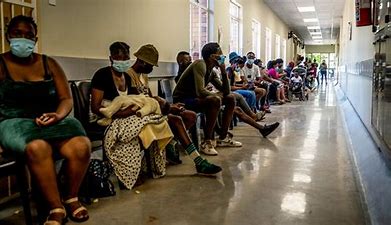 While researchers are warning that it might be too early to tell, doctors are seeing a significantly different clinical profile in their patients admitted for Covid in Tshwane hospitals – giving preliminary and early indications of less Covid pneumonia and less severe disease.

Tshwane is significant as it is the epicentre of the current outbreak of infections as severe diseases are most often seen after a few weeks.

On Friday researchers at the National Institute for Communicable Diseases confirmed that they too were seeing a slightly different picture, but added that this could be the result of vaccination rather than a characteristic of the Omicron variant that is now dominant in Gauteng.

The picture, Dr Fareed Abdullah points out, is “unusual” and shows a marked difference from what they saw in the first three waves. Abdullah is the director of the Office of AIDS and TB Research at the SAMRC and a part-time HIV Clinician at the Steve Biko Academic Hospital, where he has worked as part of the Covid clinical team in the first three waves of the epidemic.

The National Institute for Communicable Diseases (NICD) released the latest available figures of confirmed coronavirus infections on Saturday night. These were 16,366 new cases, confirming Prof Salim Abdool Karim’s prediction that the country will top 10,000 new cases a day by the end of the week.

Of these new cases 11,607 are in Gauteng. The next highest numbers are found in the Western Cape (1,017) and KwaZulu-Natal (1,002). The country currently has a 23.8 per cent positivity rate meaning more than one in five tests are positive. Between Friday and Saturday 65,990 people were tested.

Tshwane has borne the brunt of the current outbreak of coronavirus infections driven by the Omicron variant, with close to 10,000 cases (9,929) reported in the district in the last five days from November 29 to December 3, 2021.

“It is essential to recognise that the patient information presented here only represents the first two weeks of the Omicron wave in Tshwane. The clinical profile of admitted patients could change significantly over the next two weeks, by which time we can draw conclusions about the severity of disease with greater precision,” he explained.

Yet, he added they were seeing an unusual clinical picture that is significantly different from their observations in the first three waves of infections.  This includes that 76 per cent of patients were incidental Covid admissions.

“This very unusual picture is also occurring at other hospitals in Gauteng. On 3 December Helen Joseph Hospital had 37 patients in the Covid wards, of whom 31 were on room air (83 per cent); and the Dr George Mukhari Academic Hospital had 80 patients, of which 14 were on supplemental oxygen and one on a ventilator,” Abdullah said.

At this stage, while there is an alarming increase in cases, there does not appear to be a similar exponential increase in admissions for Covid pneumonia, their research found, based on the high proportion of patients not requiring supplemental oxygen.

Abdullah said that their research was done at the Steve Biko/Tshwane District Hospital Complex in Pretoria but the tests are done on a PCR machine that does not screen for the S-gene which would indicate the presence of Omicron. The National Institute for Communicable Diseases have however indicated last week that Omicron is now the dominant variant in the Tshwane district.

“A reasonable assumption is being made that the cases described here represent infection with the new variant,” Abdullah said. Their findings include:

A sharp rise in admissions at the Steve Biko Academic and Tshwane District Hospitals Complex, with 166 new admissions between November 14 and 29 2021. The majority of patients were, however, not oxygen dependent.

The NICD reports a similar shorter length of stay for all hospitals in Tshwane in its weekly report. It is also less than the Gauteng or National average length of stay reported by the NICD in previous waves.

Of 38 adults in the Covid wards on December 2, 2021, six were vaccinated, 24 were unvaccinated and eight had unknown vaccination status.

Of nine patients with Covid pneumonia, eight are unvaccinated, one is a child. Only a single patient on oxygen was fully vaccinated, but the reason for the oxygen was chronic obstructive pulmonary disease.