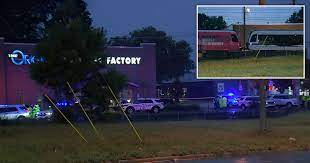 Two brothers were killed after being hit by a train as they mourned their other brother, who died in the same spot. Pablo Tiquiram Us, 29, and Jose Chilambalam Tiquiram Us, 20, died in Charlotte, North Carolina, after the light rail train struck them on Tuesday.

In a sad irony, Pablo and Jose were “mourning the loss” of their other brother, 27-year-old Baltazar Tiquiram Us, who was struck by train on July 26, Charlotte-Mecklenburg Police Department Sgt Adam Jones said.

During a press conference on Wednesday, Jones said that Pablo and Jose had their fate sealed the same way that their middle brother did.

“They had been memorializing their brother on the one-week anniversary of his death and they were conducting a memorial out by the site where he was killed,” Jones said, according People.

Though all three deaths are coincidences, Baltazar was fatally hit by a different train on while driving his Toyota Tundra around the track’s crossing arm, The Charlotte Observer reported.

Inside the car, an unnamed passenger was taken to a local hospital with serious injuries, the outlet said.

“Unfortunately, the two brothers were also struck by a train while they were on foot and they both succumbed to their injuries pretty quickly,” Jones said. “I cannot imagine losing three of your children – three of your siblings, within a week to such tragic circumstances.”

Whether it is derailment, train-train collisions, train-car collisions, train-person collisions or damage to property, nearly 1,000 people are killed in train-related accidents every year, according to the Federal Railroad Administration Statistics.

North Carolina is ranked 13th among states with the highest highway-rail grade crossing collisions, and is ranked 12th in the highest total trespass casualties.