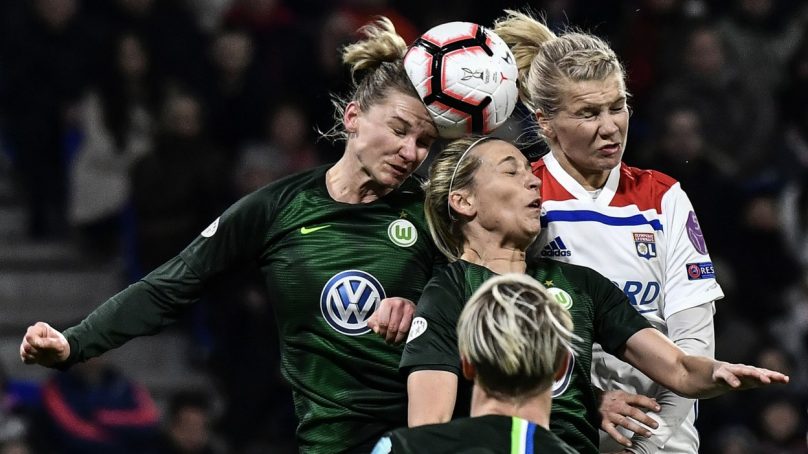 Liz Williams was standing pitch-side at a women’s rugby match and she did not like what she was seeing. Williams, who researches forensic biomechanics at Swansea University, UK, had equipped some of the players with a mouth-guard that contained a sensor to measure the speed of head movement. She wanted to understand more about head injuries in the brutal sport.

“There were a few instances when my blood went cold,” Williams said.

When the women fell in a tackle, their heads would often whiplash into the ground. The sensors showed that the skull was accelerating – indicating an increased risk of brain injury. But medical staff at the match, not trained to look out for this type of head movement as a cause of injury, deemed the women fine to play on. Such whiplash injuries are much rarer when males play.

Williams’ observations highlight an increasingly apparent problem. A growing body of data suggests that female athletes are at significantly greater risk of a traumatic brain injury event than male athletes. They also fare worse after a concussion and take longer to recover. As researchers gather more data, the picture becomes steadily more alarming.

Female athletes are speaking out about their own experiences, including Sue Lopez, the United Kingdom’s first semi-professional female football player in the 1970s, who now has dementia – a diagnosis she has linked to concussions from heading the ball.

Researchers have offered some explanations for the greater risk to women, although the science is at an early stage. Their ideas range from differences in the microstructure of the brain to the influence of hormones, coaching regimes, players’ level of experience and the management of injuries.

Given that most, if not all, sports-concussion protocols are based on data from men, female athletes ranging from schoolgirls to this year’s Olympic football squads are being put at risk of serious injury.

“We take all of these data, primarily from studies on men; we apply them to women. That’s just got to change,” says Michael Grey, who researches rehabilitation neuroscience at the University of East Anglia in Norwich, UK.

Head injuries in sport have had a high profile for many years, with hundreds, if not thousands, of participants in American football, rugby, football, boxing and other sports experiencing dementia or memory loss thought to be linked to recurrent blows to the head decades earlier. Coaching protocols at all levels are changing to try to prevent injury, but these have generally neglected to include a huge cohort: women.

Studies from US collegiate sports have shown that female athletes are 1.9 times more likely to develop a sports-related concussion than are their male contemporaries in comparable sports. Those female students also missed many more study days as they recovered.

Neuropathologist Willie Stewart at the University of Glasgow, UK, co-authored a study published earlier this year of more than 80,000 secondary-school soccer players in the United States, with similar results.

It’s not just the number of head injuries that differs between women and men, but also their nature. A review of 25 studies of sport-related concussion suggests that female athletes are not only more susceptible to concussion than are males, but also sustain more-severe concussions.

Athletics trainer and sports scientist Tracey Covassin at Michigan State University in East Lansing was one of the first to look at the differences between the sexes, starting in the early 2000s. She was interested in concussion, but noticed that all the data were coming from male-dominated sports in the United States: ice hockey, boxing and American football.

In more than 20 papers over almost two decades, Covassin has shown that there are sex differences in concussion rates and recovery times.

In 2013, for instance, she published work on concussed soccer players in the United States, and showed that the female players scored lower in memory tests and experienced more symptoms than did their male contemporaries.

As-yet-unpublished research by Williams on female rugby players – among the first studies to analyse sex-specific mechanisms of head injury in the sport – showed that more than 50 per cent of the 25 female participants experienced injuries caused by their head whiplashing into the ground, whereas only one male player did. “I didn’t expect that. That’s an important discovery,” says Grey, who has seen Williams’s results.

The actions leading to head injuries in female players might also be different. In Stewart’s soccer study, the girls were most likely to injure themselves when they made contact with an object (such as the ball, when heading it for example), whereas the boys were more likely to make contact with another player. Whether this is a matter of coaching, an individual’s level of playing experience or something else isn’t yet known.

The damage that causes concussion can be quite subtle. The brain can’t move that much in the skull, explains Stewart. “The brain virtually fills the intercranial cavity, and there’s a little thin film of fluid that fills up what space is left.”

But, in the split second after an impact, the head rapidly decelerates, and the resulting forces transmit deep inside the brain. The gelatinous grey matter undergoes significant shear forces when the head stops suddenly, pushing and pulling the brain tissue in a way that can cause structural damage.

And those forces can affect the brains of men and women in profoundly different ways. Doug Smith at the University of Pennsylvania’s Penn Center for Brain Injury and Repair in Philadelphia uncovered evidence that could be crucial for explaining some of the different outcomes seen in women versus men: their brain cells are structurally different.

Every neuron has a major fibre called the axon, which is responsible for transmitting electrical signals from cell to cell. Damage to axons, through strong shear forces, is thought to be the main reason that concussions occur.

“Your brain literally can break,” says Smith, holding up some silly putty during a video call to demonstrate. When stretched gently, the silly putty deforms and then relaxes back into shape. When yanked violently, it snaps.