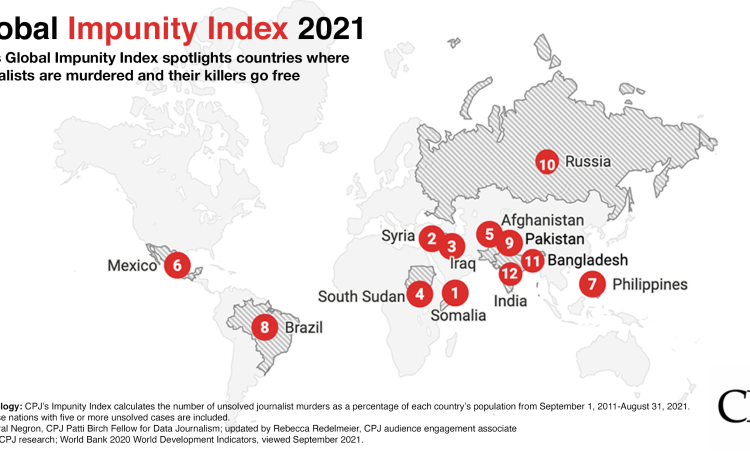 Over the past decade, 226 of the 278 journalists killed in a nexus of corruption, organised crime, extremist groups, and government retaliation, have been murdered with impunity, according to the Committee to Protect Journalists’ 2021 Impunity Index, published today, October 28.

The annual Index spotlights countries where journalists are murdered and their killers go free.

“When justice is subject to corruption and political power feuds, these forces silence journalists and the critical stories they tell,” said Gypsy Guillén Kaiser, CPJ’s advocacy and communications director. “It is imperative that authorities fully investigate these crimes and stop censorship by murder. This task cannot be left to the families, colleagues, and civil society groups tirelessly seeking justice.”

The Index shows little change from 2020, with Somalia remaining the worst country for impunity in journalist killings for the seventh year. It is followed by Syria, Iraq and South Sudan. Illustrating the sustained lack of accountability, seven of the countries on the list have appeared every year. In 81 per cent of all cases in the Index, CPJ recorded complete impunity.

In countries like Mexico, which has consistently remained the deadliest country for journalists in the Western Hemisphere, there have been some key convictions in the cases of journalists Javier Valdez Cárdenas and Miroslava Breach Velducea. However, attacks have continued unabated, with at least three killed thus far in 2021, a chilling sign of how murder can stifle the press freedom environment.

While the Index reflects some of the most dangerous countries for journalists, it doesn’t include the full scope of threats to press freedom, from imprisonment to surveillance, to physical attacks. For example, Afghanistan’s spot on the Index did not change, yet its vibrant media landscape has been decimated since the Taliban took control of the country during the US withdrawal.

As Afghanistan’s judicial system collapses, the prospect of justice for the 17 journalists killed in the last 10 years moves further out of reach.

CPJ remains steadfast in its commitment to securing justice for journalists and ensuring family and colleagues get the answers they deserve. In an important step, CPJ and partners, as part of A Safer World For The Truth, will host a Permanent People’s Tribunal to hold governments accountable for the murder of journalists, delivering indictments to Mexico, Sri Lanka, and Syria. The opening hearing is November 2, coinciding with the International Day to End Impunity for Crimes against Journalists. Learn more and RSVP here.

CPJ’s Global Impunity Index calculates the number of unsolved journalist murders as a percentage of population.

The 2021 Index examines journalist murders that occurred between September 1, 2011 and August 31, 2021. Only those nations with five or more unsolved cases are included on the index. Read about our methodology.