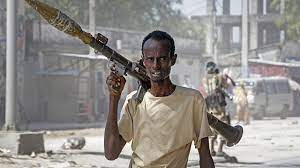 After weeks of heated disputes between the outgoing President Mohamed Abdullahi Farmaajo and his Prime Minister Mohamed Hussein Roble over the disappearance of a female spy, the two men finally agreed to move on.

According to a deal signed by Farmajo and Roble, “speeding up elections is a top priority.”

Somalia currently has no legitimate national authority. The mandates of the federal institutions expired in February and cannot constitutionally be extended. But there has been a political understanding that the incumbents remain in office pending an electoral process to establish a new parliament and government.

“That understanding is now fraying because the electoral process is months behind schedule. Villa Somalia [Somalia’s Presidential Palace] has been systematically frustrating the process at every turn and trying to manipulate the election model for its benefit,” said Horn of Africa expert Matthew Bryden. “If so, then there is a very real risk that some political stakeholders will lose patience and that the fragile understanding that currently maintains stability may begin to disintegrate,” Bryden told DW.

Somalia’s al-Qaida-linked al-Shabab extremist group has already vowed to disrupt the electoral process. To make matters worse, fighting between regional forces supported by the federal army and the once allied moderate Sufi militias in Galgaduud province of central Somalia has killed more than 100 people. The clashes injured another 200 others.

In a statement issued on Thursday, Sufi leader Sheikh Mohamed Shakir Ali Hassan said the central government deployed more troops from Mogadishu to Guri-El and used excessive force as the national army clashed with the group.

The violence affected medical services in the district, causing massive destruction at two hospitals in the area. As a result, more than 100,000 people fled to neighboring villages.

“We cannot describe the level of destruction by the conflict here in Guri-El district,” Anas Abdi, a district commissioner, told DW. “But we are committed to all we can to bring those affected and displaced people back to the district, get assistance and restart their livelihood.”

The moderate Sufi group claimed it had taken over the area to intensify fighting al-Shabab insurgents in the region. However, both state and central government officials believe the group’s leaders were regrouping in an attempt to influence the regional administration in the upcoming elections.

Somalia’s best-trained counter-terrorism forces are being used to fight another force [the Sufi moderate group] that has had great success fighting al-Shabab, according to Jay Bahadur, a Somalia political analyst and researcher based in Nairobi.

“The president of Somalia’s constitutional term limit expired in February, and he has since been using foreign-trained security forces to cling to power,” Bahadur said. “Most recently, he’s turned the Danab battalion – Somalia’s most elite counter-terrorism force – against a militia that has historically had the greatest success fighting against al-Shabab.

“This should be an issue of particular concern to the United States, which has trained and equipped the Danab battalion at great expense. The only party benefiting from the president’s actions is al-Shabab,” the Canadian-born author known for writing a book on piracy in Somalia, added.

Very little progress has been made on the clan-based elections where five regional states choose 52 members of the senate. The upper house consists of 54 seats in total.

Moreover, there is no meaningful agreement or deadline on critical aspects of the electoral procedures. The indecision has enormous potential for further disputes and delays about the list of 275 lower house members or house of representatives.

The national indirect clan-based election, a highly complex system of governance in Somalia for the last 20 years, was pushed back several times due to federal and state-level disagreements over procedures.

Initially, Somali political stakeholders had agreed that only two candidates should run for the senate seat. The regional leaders had given the authority to identify the two persons eligible to run for a seat. Then the regional parliament for each state had to decide which candidate goes to the senate in a vote.

Unlike the senate, the lower house of parliament, which comprises 275 members, is selected by 27,775 clan delegates. In other words, it is not a universal suffrage election or a one-person, one-vote system. But clan elders will pick — by hand — a total of 27,775 delegates to select the 275 lawmakers. Thus, there are 101 delegates for each lower house seat.