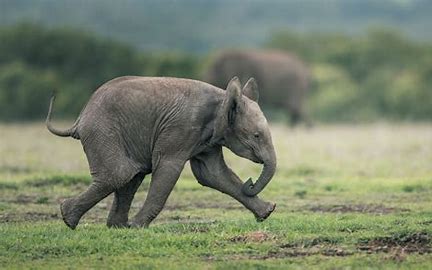 Rescuers in Zimbabwe airlifted a seriously injured elephant calf to safety after she was found entangled in a wire snare, with one ear almost completely detached, the International Fund for Animal Welfare (IFAW) reports.

IFAW said in statement that fishermen d spotted the approximately 18-month-old female calf wondering alone on the banks of the Zambezi River, in the Rukuru Concession Area close to Chirundu on the Zambian border before they alerted conservation agencies.

The calf, they said, was dragging a snare and had wounds from surviving an attack by hyenas.

In a complicated operation, the veterinary team from Wild is Life-Zen Nursery (WIL) in Harare worked alongside rangers of the Zimbabwe Parks and Wildlife Management Authority (ZimParks) to dart and immobilise the elephant to remove the snare. The calf was then flown to WIL.

“Darting elephants so close to water is always dangerous because of the possibility of them bolting into the water and drowning or being attacked by crocodile or hippo. An additional safety risk is Rukuru’s large populations of lion and hippo,” said Roxy Danckwerts, founder and CEO of WIL.

“Vets removed a wire snare that had cut through her ear, leaving it almost amputated. She was immediately airlifted to our facility in Harare and we’re very pleased with her progress. She’s recovering well and is bonding with the other rescue elephants we care for. However, the damaged ear will be permanently disfigured and will make her quite distinctive in appearance,” Danckwerts said it was unlikely the injury would affect the elephant’s hearing.

“Disused telephone wires are frequently used by poachers to snare wildlife and sadly, this is a growing trend as Covid-19 has robbed so many people of their jobs and livelihoods,” says Neil Greenwood, IFAW Regional Director Southern Africa. “There is a snaring challenge in some buffer areas of Zimbabwe’s national parks and a converse situation inside protected areas where IFAW and other organisations support ZimParks in strengthening law enforcement capacity.”

WIL said the prognosis for the elephant’s recovery is good and she will be a candidate for release back into the wild within a few years.