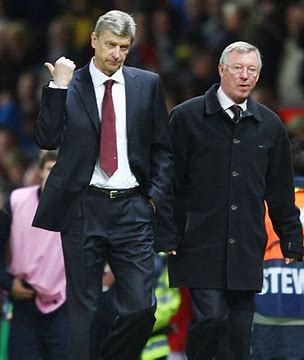 Legendary Manchester United manager Sir Alex Ferguson has lifted the lid on his “toxic” feud with former Arsenal boss Arsene Wenger. Ferguson and Wenger led the two teams who were the main rivals for the Premier League title for much of the late 1990s and early 2000s.

There were frequent clashes between the duo as a result, with many of the matches sparking ugly scenes such as those seen in the ‘Pizzagate’ game. The duo faced each other 49 times over the 17 years that they were both managers in the Premier League, with Ferguson winning 23, losing 16 and drawing 10.

Despite that, Wenger was able to lead the Gunners to three Premier League titles, with United finishing in the top three on every occasion.

Ferguson, meanwhile, guided the Red Devils to 10 league titles during Wenger’s Arsenal reign and 13 in total. The fact that they were such close rivals created an uneasy relationship between the pair, with frequent clashes.

And in a new documentary about Wenger’s career, Ferguson has admitted that the feud between them turned “toxic”. The Scot did though praise Wenger for turning Thierry Henry into a Premier League force following his arrival from Juventus.

Henry had scored just three goals in 20 games in Italy, but quickly became one of the deadliest strikers in Premier League history. He scored more than 30 goals in five successive seasons at his peak, with Ferguson sending Wenger the plaudits for that remarkable change.

“It became toxic for a while,” Ferguson told the Arsene Wenger: Invincible documentary about his relationship with the Frenchman.

“The big change that made Arsenal was reinventing [Thierry] Henry. And the goals… he was fantastic. You’re always looking in the rear-view mirror to see who’s coming up behind you, and when you see someone, you accelerate. Arsenal were catching us up, and their team was good enough to go above us, there’s no question about that,” Ferguson recalls.

Wenger also revealed that his tussles with Ferguson helped him to stamp his authority on Arsenal following some puzzlement over their decision to appoint him.

“Alex Ferguson was the dominant figure in English football. Everyone was scared of him, from the press to the referees,” Wenger said. “I thought that’s a good opportunity for me to show that it’s not only in England that you know how to play football. I was ready for the fight. It was sometimes very aggressive, especially after the games. When you’re fighting to win, you are two lions. Your only one desire is to eat the lion who is against you. I was not scared of anybody in football.”

Their relationship mellowed as Arsenal fell out of title contention, with Ferguson now blasting Gunners fans for the animosity that existed in Wenger’s final years in charge.

“He kept them in Europe every year and yet he was criticised. The supporters should be ashamed. Arsene and myself are dinosaurs, but we didn’t do so badly,” he added. “I won 13 leagues but I was never near going through a season undefeated. The achievement stands above everything else, and it was Arsene’s.”