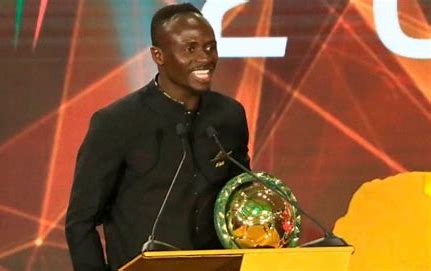 After an exceptional season, the writing was on the wall that Sadio Mané was going to win the African Player of the Year award, his second in history. And on Thursday he did. Mané is more of a national symbol for the Senegalese whom he led to their first African Cup of Nations crown in February.

The 30-year-old helped Senegal to both Africa Cup of Nations glory and World Cup qualification, beating Salah’s Egypt on both occasions. However, ahead of leaving Liverpool for Bayern in a £35 million move, he teamed up with Salah to help the Merseyside club to victory in the FA Cup and Carabao Cup.

He was also a whisker away from adding the Premier League and Champions League trophies in a wildly successful 2021-22 season, scoring 23 goals in 51 appearances.

Speaking at the Confederation of African Football (CAF) awards ceremony in Rabat, Morocco, Mane said: “I am very, very happy to receive the trophy this year. I thank the Senegalese people, and dedicate this trophy to the youth of my country.”

It was a successful night for Senegal, with the West African nation claiming five of the seven men’s awards available.

“It is really deserved and there’s lots more to come because he is a very nice kid, modest and great footballer,” said one man in Dakar, the Senegalese capital.

“He often faced a lot of criticism, but he always kept hope. He’s worked hard and we’ve seen how important he’s been in the Liverpool system. He’s a guy that you can throw to the left, to the right, in the middle, you have to have qualities to be able to do all that work,” said another man.

Mane was a key figure in the Senegal team that defeated Salah-captained Egypt in the 2021-2022 Africa Cup of Nations final and in a 2022 World Cup play-off. He becomes the first Bayern Munich player to be voted African Player of the Year.

Senegal tactician Aliou Cisse was crowned Coach of the Year. Cisse won Coach of the Year for leading the country to their first ever AFCON title, while Pape Matar Sarr, who will link up with Tottenham Hotspur for the first time this summer, won Young Player of the Year.

Nigeria and Barcelona forward Asisat Oshoala won Women’s Footballer of the Year after a standout season in which she helped her club side win the Spanish title, and had also claimed the Pichichi award for being the competition’s top goalscorer.

Oshoala, who has endured several injury problems in recent seasons, said, “It’s a record-breaking night for me, as an individual and for Africa as a whole. The 2021-22 season was really tough for me as an individual, and I’d like to thank everyone who has stood by me. If you don’t fall, you don’t know the power of comeback and what comeback means.”