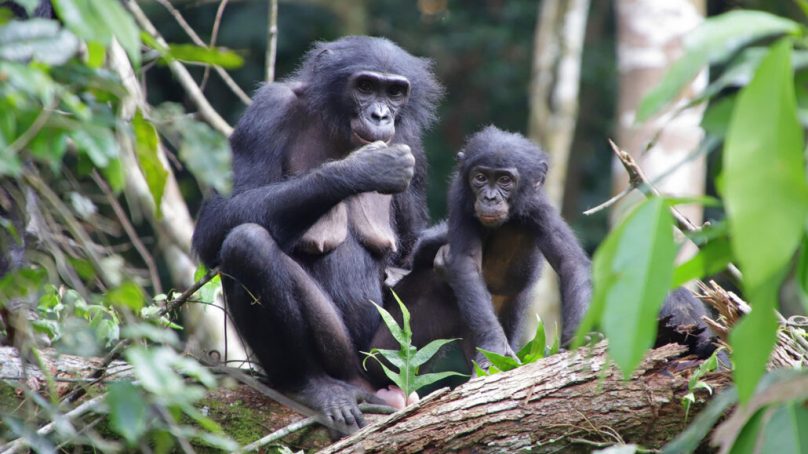 Attentive parenting appears across the animal world, but adoption is rarer, especially when youngsters taken in are not kin. Now researchers have witnessed bonobos adopting infants from outside of their own communities.

Two females, each from a different bonobo group, in the Luo Scientific Reserve in Congo took charge of orphans – grooming them, carrying them and providing food for at least a year.

Two instances of adopted outsiders are known in other nonhuman primates, but this is the first time it is been observed in great apes, researchers reported on March 18 in Scientific Reports.

During a week when the researchers could not observe the bonobos, two groups each gained an infant. One mother named Marie was already caring for two infants when she adopted Flora, identified from her facial features and colour patterns as formerly part of another group.

Marie carried and breastfed Flora and her youngest biological daughter and groomed all three. “She seemed to be very tired but was a great mother,” says Nahoko Tokuyama, a primatologist at Kyoto University in Japan.

Sometimes Marie favoured her offspring, Tokuyama says, grooming them more frequently than she did Flora.

An adopted bonobo infant named Flora (bottom) plays with one of her foster mother’s biological children.

Tokuyama and her colleagues also noticed that a female bonobo named Chio, estimated to be in her mid-50s, had adopted an orphan the team dubbed Ruby. Though Chio wasn’t producing milk, she suckled Ruby. A genetic analysis showed that neither infant was maternally related to any female in their new group.

Seeing caretaking beyond the group “blew me away,” says Cat Hobaiter, an ethologist at the University of St Andrews in Scotland who was not part of the study. Chimpanzees, for example, may adopt siblings and unrelated orphans from within their clique.

But chimps, who along with bonobos are humans’ closest surviving evolutionary relatives, can be hostile toward outsider infants and even kill them.

In many ways, the adoptions make sense, Hobaiter says. Unlike chimps, bonobos are notoriously tolerant and seek opportunities to interact with members of other groups. Groups come together for days to “share food and sex and everything else with the neighbours in a really free way,” she says.

Researchers sometimes attribute adoptions to females practising maternal care or helping their kin and advancing their genes. But with unrelated adoptees and females who have already raised young, those explanations do not fit the new observations.

The adoptions may stem from the nature of bonobos, Tokuyama says, including their empathy, tolerance and tendency toward behaviour that benefits others.

Such behaviour may pay off down the line, says Klaree Boose, a primatologist at the University of Oregon in Eugene who wasn’t part of the work.

“It’s like sidestepping the whole gestation process” to gain another partner, she says. In bonobo society, in which females typically hold the highest ranks, youngsters could remain allies even after joining another group, helping their adopted mothers when the groups cross paths. But the researchers will have to wait to see where the adoptees’ allegiances lie.

How to understand and manage emotions, build flourishing connections