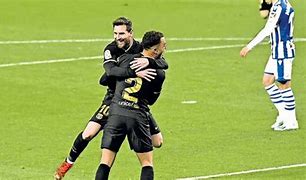 Revealed: Iconic Lionel Messi plans Barcelona return at expiry of his contract with PSG this season

Lionel Messi will reportedly decide where his future lies following the conclusion of this winter’s World Cup. The Argentina international, who moved to Paris Saint-Germain last summer after Barcelona were unable to offer him a new contract, has been tipped to return to the Nou Camp when his deal at the Parc des Princes expires at the end of the season.

Messi cemented legendary status at Barcelona during his 21-year spell in Spain as he became one of the most decorated footballers in the history of the game. The forward played 778 times for the Catalan giants after being handed his debut in 2004 and bagged an incredible 672 goals and 303 assists.

Messi tantalised opposition defences time and time again in Barcelona colours and was recognised as La Liga’s player of the season nine times between 2009 and 2019. And his prodigious abilities helped the Spanish side win 10 La Liga titles, four Champions League titles and three Club World Cups.

During his time at the club, he also won six Ballon d’Ors, with a seventh coming his way just months after moving to France.

Messi’s Barcelona association runs deep and, according to transfer guru Fabrizio Romano, the 35-year-old will make a decision about a Barca return following his international endeavours at the end of the year. Barca dream about signing the blockbuster star once again, but PSG are keen to renew his contract.

Messi has often cut a frustrated figure in France and hasn’t been able to have the same impact he did at Barcelona. Last season he was only able to find the back of the net 11 times in 34 matches as PSG were knocked out of the Champions League in the last 16 by eventual champions Real Madrid. But he did lift the Ligue 1 trophy as his team cruised to the title with a 15-point cushion over runners-up Marseille.

Messi’s Barca departure came after the Catalan club were thrown into financial difficulties following the Covid-19 pandemic. And he was reportedly handed a deal worth £25million-a-year after tax, as well as bonuses, when he moved to France and also received a £25m signing-on fee.

The veteran was visibly emotional when his Barca exit was announced in a press conference last summer. And he promised to one day return to the Nou Camp when he faced the Spanish media for the final time. “I cannot be more proud of what I did and lived in this city, which I will return to when I finish abroad, because it is our home and I promised it to my children as well,” he said in August 2021. “I thank everyone who helped us.

“I wanted to say goodbye properly. I’ve given my all from the first day to the last. One day I hope to come back. I promise that to my kids. I want to help this club to be the best.”