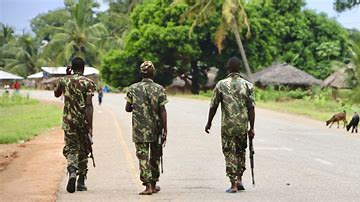 Bernardino Rafael is not prone to hyperbole, but his recent comments about the war on terrorism in northern Mozambique were optimistic. The general commander of the Mozambican police force was speaking to Rwandan troops at their post near the town of Chai when he extolled their coordinated efforts with state forces.

“We are hitting the enemy hard,” he said on May 13. “We aren’t saying that we’ve come to the end, but we’re almost there.”

Indeed, after suffering through a bloody extremist uprising for years, Mozambique’s Cabo Delgado province is seeing signs of progress. Militants, now known as Islamic State-Mozambique, have gone into hiding and are struggling for resources, especially food.

“In recent times, the terrorists, increasingly weakened, are carrying out sporadic attacks in small groups, sometimes with the aim of stealing food,” Mozambican President Filipe Nyusi said in a public speech on May 27 during a political party session.

Nyusi said the “progress against terrorism” is allowing the gradual return of residents to parts of the province and the restoration of schools, hospitals, roads, and administrative and financial services.

Despite the progress, he called the insurgents “a major challenge” and cautioned against “triumphant rhetoric.”

“The Cabo Delgado tragedy is set to continue, with band-aid normalisation messages leaving so many vulnerable,” she tweeted on May 25.

Islamic State group-affiliated insurgents have killed more than 4,000 people and forced 800,000 from their homes since 2017. Despite military successes, the head of the Southern African Development Community mission in Mozambique (SAMIM), Mpho Molomo, said it’s too early to anticipate the end of the insurgency.

According to Molomo, attacks against men, women and children continue in forests where civilians are hiding.

“We are stabilising the situation, but we cannot say that we have completely overcome terrorism,” he said during a lecture in May at Eduardo Mondlane University in Maputo, Mozambique.

Joint operations have recovered several parts of the province previously occupied by rebels, including Mocímboa da Praia, which extremists held from August 2020 to July 2021.

“After a flurry of violent activity in the previous two weeks (from late April to early May), insurgents have once again withdrawn to their bases in the forests, appearing occasionally in search of food,” conflict observatory Cabo Ligado stated in its May 17 situation report.

“The insurgents appear to be releasing hostages to reduce the number of mouths they have to feed, though some hostages still serve a purpose in helping secure food supplies.”

According to reports, militants conducted several food raids in Cabo Delgado in May. Security forces arrested 12 fighters on May 13 after they crossed into Tanzania in search of food. Dozens have surrendered.

“A local source reports that insurgents do not currently seem to be interested in killing and are only launching attacks to seize food to survive,” Cabo Ligado reported. “The insurgency has always preyed on the population for supplies. This was sustainable when it controlled significant territory, and had supply chains into urban areas in Cabo Delgado and across the border into Tanzania.

“With operations severely disrupted, particularly by the Rwandan forces, and minimal return of displaced people, supply chains are broken, while still empty villages have little to loot.”

There are signs that life is returning to normal for civilians in parts of Cabo Delgado: Armored military vehicles patrol reopened roads; trading, fishing and other traces of commerce are resuming. Electricity, health care and government services are flickering back to life.

But a significant number of citizens remain in hiding. The United Nations Refugee Agency estimates that 6,000 people are newly displaced this year after a resurgence of conflict in Cabo Delgado and its neighbouring Niassa province.

The United States-funded Famine Early Warning Systems Network warns of a persistent food crisis “due to the conflict where insurgents continue to carry out small-scale attacks and killings, primarily in Mueda, Nangade, and Meluco districts, with small insurgent cells seeking to loot food and supplies from unguarded places.”

Rafael said the military has executed 70 per cent of its planned operations. He expects the remaining 30%, some in the province’s deepest forests, to be gruelling.

“The war is tougher, more difficult, when it is nearing its end,” he said. “We shall continue to fight the terrorists, without respite, until their final hideout.”