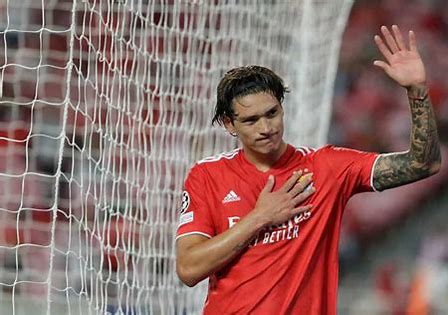 Liverpool have reached a “total agreement” over personal terms with Darwin Nunez, taking a big step towards a club-record transfer.

Nunez has emerged as Liverpool’s likeliest attacking target in the wake of Sadio Mane’s potential exit. Manchester United have also been linked with the Benfica forward, but Wednesday has brought plenty of reports on a strong interest from Jurgen Klopp’s side.

Indeed, several outlets have claimed Liverpool are willing to break their transfer record to sign Nunez. In turn, he could form part of an exciting attack in between Luis Diaz and Mohamed Salah.

Now, there have been further reports about the progress Liverpool are making on the potential deal. Initially, it was suggested that Nunez would welcome a transfer to the Premier League, and Liverpool specifically.

There is even more reason for optimism among the Liverpool faithful now. According to SportItalia journalist Gianluigi Longari – who broke the biggest transfer story of 2021, that Lionel Messi would be leaving Barcelona – the Reds have reached a “total agreement” on Nunez’s personal terms.

They are going to give the Uruguay international a contract until 2027, as long as they can agree a deal with Benfica for the transfer. That is now where their attention will turn, with a first offer being readied. Longari concluded that Nunez has “never been so close to Liverpool” as he is now.

Consequently, Liverpool look confident of beating arch-rivals Manchester United to the capture of Nunez, reports on TalkSport say. The Reds, add the reports, have put together an offer of £68 million upfront plus performance-based add-ons, which would eventually see Nunez become their club record signing.

Virgil van Dijk is Liverpool’s current record signing when they paid Southampton £75 million for his signature back in January 2018. United have already started drawing up a list of potential alternatives to the Uruguayan hit-man.

Reports elsewhere have shed further light on the terms of the contract Nunez could sign at Anfield. SIC journalist Pedro Sepulveda has also confirmed that Liverpool are making a five-year offer to Nunez. In terms of the bid to Benfica, he clarifies that it would be worth €80 million plus €20 million in add-ons. In Liverpool’s money, that means Nunez would cost £68.4 million up front and then a potential further £17.1 million. All in all, he could be an £85.5 million investment.

According to Sepulveda, Liverpool have already made their bid to Benfica. Earlier, Longari had corroborated that the two clubs are close to finding an agreement.

The Premier League runners up seem to be moving quickly in this pursuit. It could set them up for an exciting summer and season ahead. he signing of Nunez would be a statement of intent from Liverpool. After all, this is a striker who scored 34 goals in 41 games in the 2021-22 season. And at the age of 22, his potential is sky high.

Liverpool just fell short of the Premier League title in the season just gone, to Manchester City. Since then, the champions have announced their acquisition of Erling Haaland. The Norwegian international, who is one year younger than Nunez, is even more highly rated. Some feel his arrival at City will make Pep Guardiola’s side even more dominant.

But Liverpool’s intent in the pursuit of Nunez shows they are not willing to let City soar away. There is every chance they will be hot on their heels again next season. If they can indeed attract a prolific goal-getter like Nunez to the club, Liverpool would be setting themselves up for a big season.

They have lacked a genuine number nine in recent years, although the likes of Roberto Firmino, Diogo Jota and Mane have done well in central roles.

Nunez would give them even more of a presence upfront, just like Haaland will for Man City. Each striker could be at the forefront of yet another intense battle for the title.

The 22-year-old has hugely impressive statistics at Benfica, scoring 34 goals in 41 games for the Portuguese club last season. This is also likely to mean Sadio Mane’s exit from the club amid reports that Bayern Munich have had two bids turned down, the latest in the region of £30 million.

Speaking on Drive on Wednesday, European football expert Kevin Hatchard explained what Liverpool would be getting for their money, TalkSport reports.

“He’s really broken through this season,” he said. “He’s been a good player previous to that, but had some injury problems and hit hard by Covid. The season before this one was a bit disrupted, but this season just gone he’s been terrific.

According to Hatchard, “Top scorer in Primeira Liga in a Benfica side that were a bit hit and miss. They were never really in the title race and Porto won that fairly comfortably. He’s been very impressive. Scored six goals in the Champions League, so he looked really good against Liverpool and Barcelona.”

“Jurgen Klopp has spoken about him in glowing terms publicly. He’s strong and got a good burst of acceleration. He’s somebody who would suit Liverpool because he can either play through the middle or off the left in a three,” he said, and added, “Who do we know who does that? Sadio Mane, who may be on the move. He would be a good replacement for Mane, even though he’s a world class player. You are buying potential with Nunez.”