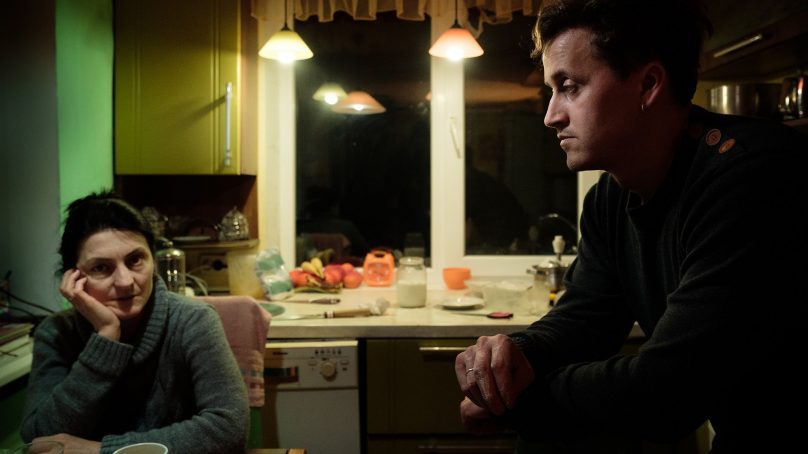 For children Ukraine know just one thing: war. Not a day goes without the rumbling of bombs, gunfire and the inevitable outcome: bloodshed and death. Love and peace are remote to the point of sounding unreal.

Earlier this year, Veronika and half a dozen other children spoke to photojournalist Jakub Laichter – along with their guardians, parents, and grandparents – from homes and military positions near the frontline in and around Avdiivka, a government-controlled suburb of the rebel-occupied city of Donetsk.

Veronika’s mother, Svetlana works at a local school and her father Oleksiy is involved with a variety of local projects aimed at improving conditions for civilians near the frontline, among other things helping a psychologist twice a week to travel to other villages and towns where such help is scarce.

The couple could have fled already, but instead they have both devoted their lives to trying to build a better future for what’s left of their community. But living with such unpredictable tomorrows is testing their resolve.

“Last weekend, we visited Sviatohirsk to see a place we could possibly go to for a little bit. Perhaps we could flee there? It’s nice over there: We call it Sviatohirsk, Switzerland of Donbas,” confides Oleksiy. “What are we going to solve then?” responds Svetlana. “We cannot keep running from place to place. We are going to be without home, work, friends.” But then she adds: “I don’t want the kids to cry anymore.”

Cold March rains drench the trenches in the forest where Vitaly is stationed outside Avdiivka, lending everything the gloomy air so typical of the Donbas steppe. Cut power lines hang from the lonely poles.

Vitaly shivers in the chill of the wind. He is sitting with other soldiers, drinking instant coffee from disposable plastic cups that have been used time and time again. The whistle of an incoming mortar shell fills the air. Vitaly mutters as he spills the coffee. Instincts kick in.

The soldiers get low to the ground. Everyone slides to the safety of a muddy trench. The shell whips through the air a few dozen metres above the soldiers’ heads and slams into the field behind them.

“Nothing changes here, no? Bullets fizz above your head. Shells are falling. You can’t even have your goddamn cup of coffee,” Vitaly says, slightly panting.

In the early days of the conflict, feelings of nationalism and a fear of invasion spurred thousands of Ukrainians to volunteer to head east to fight for their nation. Vitaly was one of them. He joined a volunteer battalion, “Azov”. Later, he became part of the official Ukrainian army. “It has been seven long years. By some measures, a lot has happened; by others, not so much. You see, I am still standing in this God-forsaken trench.”

Vitaly recounts a happier time, when his five-year-old daughter Arina* was on the way.

“In summer 2015, I called my wife, on July 29, and told her that my phone was out of battery and gave her the number of my officer so she could call me on his phone. She was already in the hospital. I wish I could have had my phone, but we did not have electricity on the frontline at that time.”

“Then, the next day, I see my officer, he is running to me through the trench and shouting: ‘Vitaly! Phone! Your wife is calling!’ I take the phone, put it to my ear and I hear: ‘Vitaly, you have a daughter.’ I jump up, throw my gun to the air and shout over the minefields, ‘I have a daughter! I have a daughter!’ again and again, so everyone can hear, even people in Donetsk; and I cry and I run to my friends and I tell them, and I am so happy.”

“But sometimes now it is not that ‘happy’. In three months, she is going to be six years old. Six years, and I am still sitting in the trench, seeing my daughter at best just a couple of times a year. Now when I call, she asks me: ‘Daddy, when will you come home?’ I tell her: ‘Soon, but I am busy now.’ She is like: ‘Dad when are you going to be free?’ I must tell her that she needs to understand. Then she says: ‘I love you,’ but often she just cries.”

Anja, 12, and her younger sister grew up with their grandmother, Sveta, on the outskirts of Avdiivka. Sveta wishes they could live far from the war. “No child should have ever seen what they have seen,” she says, recalling the early days of the conflict. “Every day, they would bring dead bodies of soldiers from the forest… They would come to us and cry.

“We saw tanks burning,” she continues. “Anja was crying when the soldiers were jumping out, burning alive. There on the road (she points out of the window), they drove into the minefield.”

“Do you remember something from the time before the war?” Sveta asks Anja. “I don’t even remember when the war started, it just always has been here,” Anja replies.

“We cannot bring up our children in a normal way. Everything is destroyed,” says Sveta. “War destroyed our plans, our future. I just wanted to live quietly with my pension, but now even that seems pointless. [Anja] was born just before the war started. She will remember only war, that’s all.”

Time passes slowly. Nobody says a word. Kids lie on the ground, drawing. Baba Sveta sits by the stove, silently, not moving, seemingly absorbed by the crackling of the fire.

As the evening comes, the shelling starts. But no one seems bothered by the sound of explosions. Sveta calmly pours another cup of tea for Anja and moves closer to the fire.

Anja is drawing one of her favourite chicks. They live inside, in the bedroom. When she is done, she lifts one of the chicks from the box next to her bed. She calls him Zhora. She sits with him by the fire. “Pipi pi pi pip – that’s you, a little chick”, she imitates the sound and then continues: “Ta ta ta ta, machine gun, and fiiiiii BUFFFF – that’s a mortar shell. When you hear ‘fiiiii’, we run and hide.”

Her smile disappears and she stares through the window.