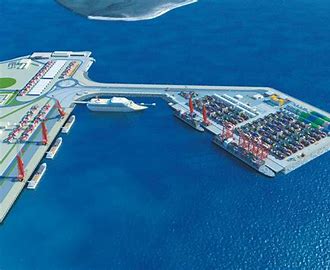 A government-backed Dubai-based port management company is at the tail-end of a process that will see the company, DP World, take complete control of Namibia’s main seaport, Walvis Bay, at the expense of Namport.

Walvis Bay port managing entity Namport, will cede its functions to the concessionaire at the new world-class infrastructure, which was revamped with loans from the World Bank, International Monetary Fund and the Africa Development Bank.

The modernisation of Walvis Bay port targeted to unlock the “futuristic” transport as a gateway to Namibia’s hinterland and neighbouring landlocked countries with enormous economic potential.

According to whistle-blowers at the Namibian pavilion at Dubai Expo, there are high prospects of Namibia being forced into a skewed deal that could be harmful to economic interests of the southwestern African nation.

From the manner the deal is structured, the whistle-blowers say, unsuspecting government officials may have been duped into acceding to a deal that has all the traits of “camouflaged corruption” similar to the Fishrot financial scandal in which the government lost huge sums of money.

The whistle-blowers say the documents in their custody revealed that DP World, a Dubai-owned port operator, under the aegis of Sultan Bin Sulayem, who enjoyed good relations with former and retired Transport Executive Director Willem Goeimann, want to be given complete control of Walvis Bay port.

The revamp of the port cost N$4.2 billion ($286 million) Walvis Bay. DP World is looking to run the container terminal, through a direct agreement, for a period of 50 years.

Sources said DP World’s strategy includes extending favours to several Namibian decision-makers, some of whom were seemingly completely oblivious of the intention of their Dubai hosts. The endgame is to avoid a transparent competitive process that would most probably undercut their chances of controlling this strategic asset, according to the whistle-blowers.

To bypass Namibia’s procurement laws and justify a direct agreement, DP World’s agents allegedly pushed for a largely farcical, experts say, government-to-government agreement between UAE and Namibia, which is now revealed as a mere smokescreen.

A signed MOU with Nara Namib to develop a free economic zone in Walvis Bay drew attention to the real strategy to gain control over processes. Notwithstanding their strategy, the scheme hit a dead-end when a number of government officials and some board of directors of Namport turned down DP World’s direct agreement proposal.

They considered it dangerous and inimical to the Namibia’s economic interest. Following the rejection of DP World’s direct agreement proposal, the expectation from all stakeholders, both local and international, was that the government of Namibia would revert to due process by instituting a fair and transparent tender process to award the concession of the strategic Walvis Bay container terminal.

Instead, it was Sulayem, the senior management of DP World and their local associates that quickly adopted to the new situation and came up with a new plan to achieve the original agenda of total control by locking Namport and the government out of their own asset.

Under the pretext of a transparent process facilitated by the Namibia Investment Promotion and Development Board (NIPDB) and run by CEO Nangula Uaandja, invitations for expressions of interest (EOI) were sent out to a larger pool of potential operators nominated by NIPDB.

Several sources and documents from the Dubai-based whistle-blowers disclosed that DP World managed to influence and manipulate the evaluation criteria in such a manner that it would disqualify all other offers to save theirs and those of sister companies.

Combining these facets, it is feared, will most likely prove detrimental to the country and its inclusive development agenda.

Would-be competitors say the process was structured in such a way as to favour the government of Dubai, which owns DP World, Jebel Ali Free Zone and the Dubai customs, could comply with the selection and evaluation criteria.  The other companies were only invited to legitimise the process.

NIPDB, which has ultimate control over the process, will evaluate the proposals against the amended criteria, eliminate the rest of the companies and enter into direct negotiations with DP World.

The process has questioned and it is likely to be challenged in court to the embarrassment of the government still smarting from the Fishrot scandal.

It is also seen as disregard and contravention of the law under which Namport is run. According to the Namibian Ports Authority Act, the only authority with jurisdiction over the port of Walvis Bay is Namport. However, Namport has controversially been excluded from the process.

Sources at Namport revealed that the port’s management had initiated a process of engaging a number of potential partners who were prepared to offer more completive terms than DP World, but their hands were tied by the procedure adopted by NIPDB. As a result, the deal appears to be done and dusted unless cabinet intervenes like it did in the case Chinese airport contract.

Namport management have appealed to IMF, the World Bank and the African Development Bank, who financed the construction of the container terminal to intervene and stop the single sourcing process that is feared to be skewed in favour of DP World.

According to the whistle-blowers, the multilateral lenders should ensure their financial assistance and contributions benefit the ordinary the people of Namibia.