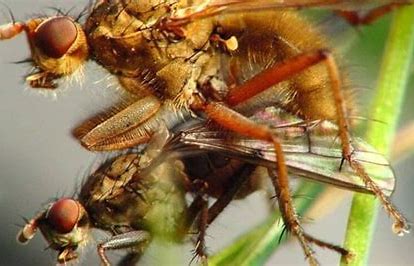 On a spring day in 1965, 20-year-old biology student Geoff Parker found himself lying flat on his stomach in an English meadow, staring at a pat of cow dung and the frantic activities of dung flies around it.

But this was far from a case of a student grudgingly accepting a somewhat unsavoury project: Parker had jumped at the chance. “I’d spent a lot of time on a friend’s farm as a kid, and I knew these yellow dung flies well,” recalls Parker, now an emeritus professor at the University of Liverpool.

Parker noticed that as soon as a cow kindly deposited a new pat, male dung flies would come flying in, eager to mate. Females soon followed, alighting nearby. Within minutes, a male would grab hold of a newly arrived female, inject his sperm into her reproductive tract, then carry her back to the pat to deposit her eggs. All the while, he would fiercely fend off any other males trying to snatch her away.

Parker was fascinated, but before long he started worrying about the sheer waste of time – not his own, to be clear, but that of the dung flies. Even after mating was over, the males held on to the females. Why would they do that?

After all, males make many more of their tiny sperm than females produce eggs, so presumably they could father more offspring if they took off to find another mate right after insemination.

Though he had always abhorred math, Parker decided to try to calculate the optimal time schedule for a male dung fly to maximise its reproductive success. He spent even more time around the pats through his PhD years, outfitting an old van with a bed so he could sleep near the meadow.

After plenty of pondering, it finally struck him: Males were not just competing for fertilisation before mating. Competition continued afterward. If a female were to go on to mate with another male, the second male’s sperm might mix with – or even replace – the sperm of the first.

Parker was even able to show that the last male to mate with a female fertilized at least 80 per cent of her eggs.

What Parker had found cast new light on many other insect phenomena described in the scientific literature. Some males left plugs in the reproductive tract of females. Others were known to forgo the traditional route entirely, injecting sperm through the female’s abdominal wall.

In 1970, Parker summoned the courage to propose a new explanation for these strange behaviours in a paper titled “Sperm competition and its evolutionary consequences in the insects.” All these strategies, he proposed, had evolved to give the sperm of one male advantage over that of another.

Parker’s ideas were slow to take hold in the scientific community. But in recent decades, sperm competition has come to be accepted as the best explanation for many surprising and sometimes quirky adaptations. It has turned out to be important not just in insects, but also in spiders, fishes, reptiles, birds and mammals, inspiring hundreds of new studies every year.

A close-up photograph shows a portion of the bed bug’s body complete with tan-coloured cuticle, lots of bristles and a fearsome-looking penis that has the appearance of a curved needle or thorn.

The male bed bug’s sharp, talon-like penis allows him to forgo traditional mating. Instead, he inseminates a female through her abdominal wall, thereby reducing competition from other males’ sperm.

Parker’s ideas were a revelation to behavioural ecologist Tim Birkhead, now at the University of Sheffield, who heard about them as an undergraduate in 1971. “All the lights suddenly went on; it was an epiphany,” he says. “I just thought, ‘That’s what I want to do – I want to see whether what Parker has found in insects applies to birds.’”

Birkhead’s plans didn’t elicit a lot of enthusiasm from his contemporaries. “People said, ‘That’s a waste of time, because everybody knows birds are monogamous,’” he recalls. Yet when, in 1972, he was dispatched to the Welsh island of Skomer to study a colony of seabirds called guillemots for his PhD, it soon became obvious that males and females of that species would often sneak off to mate with individuals other than the one they’d paired with.

Like Parker before him, Birkhead started perusing the literature, looking for evidence of promiscuity in birds. But when those detailed descriptions of bird biology got to the part that he was interested in — sex – they often just brushed over it.

“Despite the liberal sixties, it was still a bit of a no-no to write about it,” he says. So, he started corresponding with other ornithologists to ask about mating outside of the pair, and many confirmed they had seen similar things.