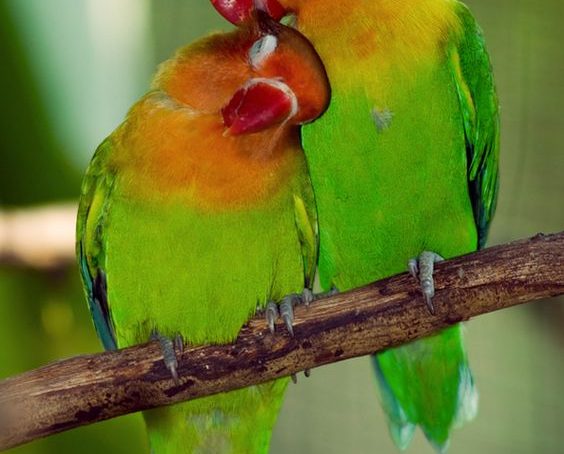 Starting in the late 1980s, the advent of genetic analysis put the final nail in the coffin for the idea of monogamy in birds, showing that in many species, males other than the one at the nest can father some of the offspring. Sperm competition, it appeared, is a concern for birds as well as insects.

Behavioural ecologist Tim Birkhead, now at the University of Sheffield Birkhead and others have documented many adaptations that make sense when viewed through that lens. Some males go to great lengths to guard females, for example, and species that often mate outside of a bonded pair produce larger and faster sperm.

In waterfowl, intense sperm competition led to the evolution of large, spiralling penises, as well as vaginas with labyrinthine anatomy that help to prevent forced fertilisation by unappealing males.

The conflict over which male gets to fertilise extends even to the molecules produced by creatures’ reproductive tracts. Scientists were surprised by studies, starting in the 1980s, reporting that sex peptide, a protein in seminal fluid, not only stimulates a female’s egg production but also lowers her eagerness to mate again, thereby reducing sperm competition.

And sex peptide was just the start. In a 2020 paper, evolutionary geneticist Mariana Wolfner of Cornell University and colleagues listed more than 300 proteins found in the seminal fluid of male fruit flies.

Several of these, the scientists showed, have an influence on sperm competition – by affecting sperm storage, for example, or favouring one male’s sperm over another’s. Many of the other proteins may also be involved in sperm competition, the researchers suspect.

In mammals, there may be 10 times as many different proteins in the semen, Wolfner adds. About 100 are known to be similar to the proteins in fruit flies. Though their effects may differ in humans, it does suggest there is molecular potential for sperm competition in our species.

Research on human sperm competition is scant and controversial, says behavioural ecologist Leigh Simmons of the University of Western Australia.

A former student of Geoff Parker, now an emeritus professor at the University of Liverpool, he has studied the extent and consequences of sperm competition in insects as well as mammals and a variety of other animals.

One of the best indications of sperm competition may be the quantity of sperm that males of a species can produce.

In studies with dung beetles and flies, Simmons and others have shown that if one eliminates sperm competition by preventing females from mating with multiple males, a decrease in the size of the testes often evolves.

In the case of the dung beetle, the resulting male offspring evolved to produce fewer sperm and thus sired fewer offspring themselves when multiple matings were allowed again.

And in studies with house mice, which are naturally promiscuous, enforcing monogamy – to prevent sperm competition – led to evolutionary changes in testes architecture. These caused a decrease in the amount of sperm produced by males in later generations.

This suggests that for most of our evolutionary history, there may have been some sperm competition in humans, but not as much as in chimps.

Modern humans have reduced sperm competition through a variety of cultural practices. First, mate guarding was “perfected” with the introduction of social restrictions on sexuality, often aimed at women. On a more positive note, contraception reinforced the ability of women to choose who fathers their children. “There are all sorts of social and cultural baggage that make humans difficult to work with and interpret,” Simmons says.

And, he adds, “There are plenty of animals to work on, so why would you do it in humans?” He fondly remembers the first time he met Geoff Parker: “We went out into a meadow in the sunshine and he showed me the yellow dung flies. We just played around for a couple of days, marking flies to see what they were doing. It was such a wonderful experience.”

There is another kind of competition that human sperm almost certainly do engage in – one that was long neglected, says evolutionary biologist Simone Immler of the University of East Anglia in the UK. And that is competition between sperm cells in the ejaculate of the same male.

For a long time, Immler explains, scientists assumed that genes in sperm were largely inactive, because sperm DNA is so densely packed. Yet as scientists learned how to study this with more precision, even down to the level of individual cells, it has become clear that genes in sperm may in fact be active early on. For example, recent research with zebrafish, a popular aquarium species used widely in research, has shown that genetic differences between sperm from the same male can affect sperm lifespan, which may be a crucial determinant of their ability to fertilize an egg.

This could be a big deal. Sperm from the same male are not genetically identical: Since each sperm contains only 50 per cent of a male’s genes, some sperm may be nearly identical to each other and some may be very different, Immler says.

So, if a certain gene variant helps a given sperm get to the egg first – or, conversely, stops it from making it there at all – that creates a whole new world of opportunities for natural selection to operate.

This kind of selection on sperm creates some potential conflicts. It might, for example, promote genetic variants that help sperm to succeed even if the offspring that result aren’t as healthy as ones that would have resulted had another sperm fertilised the egg.

But based on her results with zebrafish and similar studies, Immler thinks the competition between sperm is often beneficial.

She has shown that zebrafish sperm that survive longer than other sperm in the same ejaculate produce hardier offspring after fertilisation: ones that are more likely to reach adulthood, live long and healthy lives and produce many little zebrafish of their own.

That might be, she says, because sperm containing some of the worst new combinations of genes, or perhaps genetic defects, are weeded out early on.

Could the same be true of human sperm? Immler does think that competition between sperm of the same male probably enhances fertility by ensuring that abnormal or malfunctioning sperm don’t get to fertilise the egg.

A better understanding of the way that human sperm compete might help fertility doctors better screen sperm for in vitro fertilisation, she adds.

“Obviously, there are situations where you don’t have much of a choice, and couples should have the opportunity to have a baby regardless,” she says. “But there is definitely room for improvement for many of these technologies.”