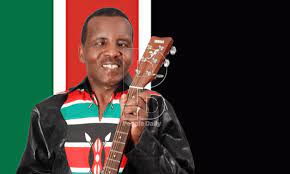 A gospel singer who wants to be Kenya’s first disabled presidential candidate has filed a case in the country’s courts after being barred from the electoral race. Reuben Kigame, who is blind, filed the case against Kenya’s Electoral Commission (IEBC) this week on Tuesday, claiming he had been blocked from entering the August 9 election.

Kigame’s campaign team claims the IEBC discriminated against him and that the commission had provided no credible explanation for his disqualification.

They allege that commission officials gave Kigame the runaround when he tried to submit his paperwork and kept him waiting for hours before declaring he had missed the deadline. Kigame said he had met the requirements to stand as an independent candidate, gathering 48,000 signatures and voter IDs from across the country.

“It was like I was a non-entity,” he said. “It’s really sad that I’d have to fight for inclusion like this.”

Kigame said the head of the commission, Wafula Chebukati, admitted to him in a meeting on Sunday that there were no systems in place to accommodate candidates with a disability.

Gitobu Imanyara, a Kenyan human rights lawyer present at the meeting, said Chebukati’s admission “was an outright acknowledgment of the commission’s breach of its obligations as a public body, for which they should be held accountable”. Imanyara said Kigame had been placed at a disadvantage and that his constitutional rights had been violated. The IEBC did not respond to the Guardian’s requests for comment.

Kigame has received muted support from Kenyans, although a group of young people camped outside the Electoral Commission’s building in a silent protest last week. They draped white cloths over their eyes as a symbol of Kigame’s blindness and political vulnerability and held placards that read: “No Kigame, no elections”.

Kigame, a former schoolteacher, is known for many different things, said Sungu Oyoo, a writer and social activist. He is a veteran gospel singer whose music is famous in churches across the country. He is also known for his support of young talent through his music academy and work with #LindaKatiba, a citizen movement to defend the constitution. He is also considered a trailblazer in disability activism through his presidential bid.

He first entered national politics in 2013, when he ran for a gubernatorial seat in Kenya’s western Vihiga county and came in fourth. He says people discouraged him from going into politics, saying it was too “dirty” for a Christian leader. “But that’s the reason I want to go into it – because it needs a clean-up,” said Kigame, whose politics are influenced by Martin Luther King Jr.

“In Kenya, 59 years of doing things the same way have not delivered economic stability – or dealt with the three issues we faced at independence: ignorance, poverty, and disease,” he said. His campaign pledges to prioritise the basic needs and rights of Kenyans, calling out the current government’s focus on infrastructural development over the welfare of citizens.

Despite Kigame’s accomplishments, some still struggle to see beyond his disability. His campaign team have faced such questions as: “How would he be able to inspect the presidential guard?”

“There’s a poor cultural perception around people with disabilities,” Kigame said. “Many people only know blind people as people in need.” At least 900,000 Kenyans are disabled, according to the 2019 census, yet the country has little to no infrastructural accommodation for them, leaving people socially and economically marginalised.

Caroline Pereina, of Kenya’s Society for the Blind, said that since Kigame began his campaign, she had seen people show more interest in what it is like to live with a disability. “His candidacy was historic for the disabled community. It felt like we were finally being seen and heard, so it was a really sad day for us when we heard that he was disqualified,” she said. For her, his exclusion from the race mirrored her daily experiences.

Mark Bichachi, a political analyst, said: “For those of us in the city, we may understand that Kigame’s candidacy was a big step in terms of Kenya coming of age. But if you’re in politics, you also know that there’s no possibility of a fringe candidate getting more than 50 per cent votes needed to clinch the presidency.

However, Wanja Njuguna, a Kigame supporter, said discussions about his chances were not the issue “It’s not about whether or not he would win,” said Njuguna. “It’s about whether he met the requirements for running, which he did.”

With his name not on the ballot, Kigame said his sponsors were pulling out, but he has carried on, holding town-hall meetings and sharing his plans for the country as he waits for the court’s judgment.