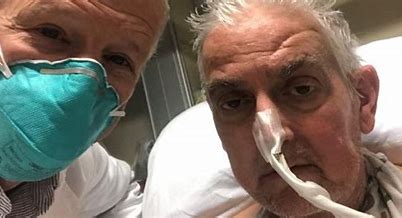 Patient with terminal heart failure breathing on his own after pig heart transplant, his medical team says

A medical team at the University of Maryland Medical Center announced on Monday that it had accomplished a world-first: Its surgeons had transplanted a heart from a genetically engineered pig into a human.

The doctors performed the eight-hour procedure on Friday evening. As of Monday night, the man, 57-year-old David Bennett, was awake and breathing on his own, and his new heart was pumping away, according to his doctors.

Bennett had terminal heart failure and was too sick to qualify for a human heart transplant or a mechanical assist device, the lead surgeon said. The pig heart, from an animal created by a Virginia biotech company, was the only option to try to prolong his life.

“It was either die or do this transplant,” Bennett said in a hospital news release. “I know it’s a shot in the dark, but it’s my last choice.”

The ground-breaking procedure raises hopes that animal organs might one day be routinely used for human transplants, which would shorten waiting lists, where thousands of seriously ill people languish and die every year. But it’s also raising a few eyebrows and a lot of questions from bioethicists.

“There’s still relatively little known about how safe this is to try in humans, so I’m viewing this with a little apprehension,” said Arthur Caplan, the founding director of New York University School of Medicine’s Division of Medical Ethics.

The transplant was not performed as part of a formal clinical trial, as generally required for experimental treatments. And the immunosuppressive drugs the patient was administered are also novel and have not yet been tested for this use in non-human primates.

It’s also renewing a debate about pigs and other animals as the source of human organs. Animal rights activists have condemned the surgery as dangerous and unethical. In a statement released on Monday evening, PETA raised the potential for xenotransplantation to transmit animal viruses to humans and urged researchers to look elsewhere for solutions to organ shortages.

“Animals aren’t toolsheds to be raided but complex, intelligent beings,” the organisation said.

Scientists have been toying with animal-to-human tissue grafting and organ donation, collectively known as xenotransplantation, for centuries. Throughout the 1800s, doctors treated wounds with skin grafts from a variety of animals – most popularly, frogs.

In the 1960s, 13 people received kidneys from chimpanzees. One lived an additional nine months, but the others died within weeks.

In a more controversial episode, doctors at Loma Linda University Medical Center in California transplanted a baboon heart into a premature baby born with a fatal cardiac defect in 1984. She lived for 21 days. It was later revealed that the surgical team had not sought out a human heart before opting for the riskier (and more headline-worthy) primate option.

After these and other failures, the medical community largely turned away from xenotransplantation. The human immune system was just too robust, too good at expelling alien intruders. But the arrival of new and better methods for altering DNA to create designer animals optimised for the purpose of producing human-compatible organs revived the dream.

Now there are a handful of labs and companies chasing cross-species transplantation, including Harvard biologist George Church and eGenesis, a CRISPR-focused company that spun out of his lab.

The heart that Bennett received came from a pig created by Revivicor, a biotechnology company spun off in 2003 from PPL Therapeutics, the UK firm that produced Dolly the sheep, the first mammal cloned from a cell from another animal.

In 2011, Revivicor was acquired by United Therapeutics, the pharma company founded and helmed by xenotransplantation enthusiast and futurist Martine Rothblatt.

In December, Revivicor won approval from the Food and Drug Administration for its GalSafe pigs, which have been genetically engineered not to produce a sugar that triggers organ rejection as well as an increasingly common meat allergy caused by a tick bite.

Revivicor is also raising a small herd of more extensively engineered pigs, containing 10 genetic changes intended to make their organs better suited to residing within a human body. The company has not disclosed what methods it has used to achieve these changes, which include inactivating a growth gene – so the porcine heart won’t continue to expand after transplantation – and other modifications to remove molecules most likely to provoke an immune attack.

It was an animal from this herd that was loaded into a van last week and driven five hours northeast to the University of Maryland Medical Center in downtown Baltimore. A few hours before the surgery began, surgeons removed the heart from the pig and placed it in a perfusion box – a mechanical device that pushed fluid through the organ to keep it preserved until the surgical team, led by Bartley Griffith, director of the cardiac transplant program at the medical center, could settle it into their patient’s open chest.