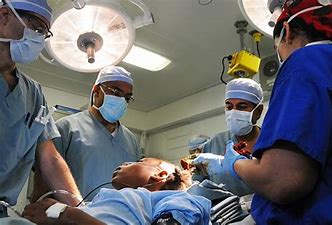 The dramatic bid to save heart failure patient David Bennett’s life at University of Maryland Medical Centre in downtown Baltimore came after he had been in the hospital for more than a month, being kept alive by an artificial breathing machine, and his medical care team determined that he was too sick to be a candidate for either a human heart or an artificial ventricular assist device. Without either, he wouldn’t live long.

“This was the only option available for an existing inpatient, already within UMMC hospital, who was facing near certain death from heart failure,” leader of his surgical team Bartley Griffith, who is also director of the cardiac transplant programme at the medical centre, told Stat.

In December, Griffith contacted the Federal Drug Agency (FDA) to obtain an emergency authorisation through the agency’s expanded access or compassionate use, pathway to use Revivicor’s pig heart. On New Year’s Eve, the FDA said yes.

It also okayed the use of an experimental anti-rejection drug manufactured by Kiniksa Pharmaceuticals, and the perfusion device.

The medical team then notified the hospital’s institutional review board, which must sign off on all experimental treatments, which it did in this case. An informed consent was obtained from the patient after a thorough ethics review and psychiatric evaluation, Griffith said in written answers to Stat’s questions.

Arthur Caplan, the founding director of New York University School of Medicine’s Division of Medical Ethics, said that those would be the minimum conditions under which it might be ethically permissible to try something as new as putting an unapproved genetically engineered animal organ into a patient. But there are other things to consider. For example, what will the hospital team do if the patient’s immune system rejects the heart in the coming days and weeks?

“You need to think hard about what you’re going to do if the patient is not succeeding and lay those options out during the consent process,” Caplan said.

In 1982, when another critically ill man named Barney Clark received the first artificial heart, no such options had been considered. Clark died a slow, torturous death, wracked by convulsions and kidney failure. His suffering may have advanced science, but bioethicists today consider it a lesson in what not to do.

Griffith did not say what sorts of options were discussed during the consent process with Bennett. “He was informed of the risks and that there were no proven benefits to this,” Griffith said via email. “He was told it was comparable to the care he was currently getting in terms of potential lifesaving benefits.”

There’s also the question of what exactly scientists can learn from a procedure like this one, taking place outside the framework of a clinical trial, and with a patient who is on his deathbed. Trials take months, sometimes years, to set up because they’re designed to gather a bevy of biochemical and physiological information to say conclusively whether or not a treatment is safe and effective.

According to Griffith, if Bennett survives, he will be closely monitored in the hospital for several weeks or even months, until he can be sent to a rehabilitation centre. He did not provide specific details about what sorts of data they plan to collect.

Caplan has argued that before clinical trials of engineered animal parts can proceed, researchers need more information. At his home institution, New York University, which is also in the race to xenotransplant, he proposed testing these types of organs first in newly deceased humans – to gain preliminary insights about how to safely proceed. Beginning late last year, NYU Langone has done two experiments testing genetically modified pig kidneys in the donated bodies of people who had recently died and were being maintained on a ventilator.

That research showed that organ rejection of a xenotransplant can be prevented during the first few days.

Griffith said that work gave his team more confidence in proceeding. But he acknowledged that the longer-term outcomes are unknown.

“Rejection of the organ can occur any time after transplant,” he wrote. The surgeon added that while organ rejection, which can be life-threatening, is the greatest risk Bennett faces, there are also risks from the drugs used to suppress the immune system to prevent rejection.

“The intensity of immune system suppression required is higher with a xenotransplant than with a traditional transplant from a human donor,” he said.

It’s still unclear when a formal test of engineered pig organs might move forward. When asked about the company’s plans to test its pigs’ organs in a clinical trial, Dewey Steadman, a Revivicor spokesperson, declined to share any details. “We are continuing to work with the FDA on a clinical and regulatory path forward,” he said via email.

Patient with terminal heart failure breathing on his own after pig heart transplant, his medical team says

Sudan’s ruling junta agrees to mediation by UN, wants African Union and Kenya on board