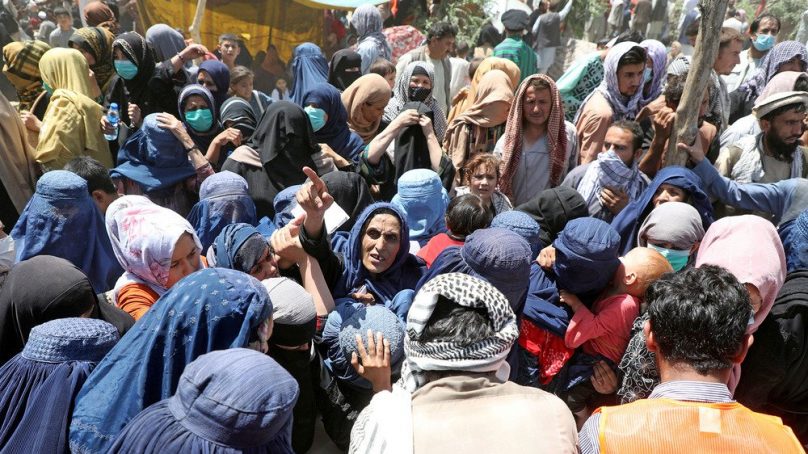 No more refugees – this is the dangerous rhetoric emerging in Pakistan as instability escalates across the border in Afghanistan.

The Taliban have gained territory at a shocking pace since the US and Nato allies accelerated troop withdrawals earlier this year. As the violence builds, the rhetoric about Afghans and Afghan refugees has taken a turn for the worse in Pakistan.

In the midst of the Covid-19 pandemic and the region’s abysmally low vaccination rates, Afghans forced to flee will face further hardship without shelter and adequate healthcare.

Pakistan’s prime minister recently said that no more Afghan refugees will be allowed to enter a country that already hosts some 1.4 million registered refugees and hundreds of thousands more people who are undocumented. The interior minister said that any refugees who do arrive would be confined to camps and barred from heading to cities.

I grew up in Islamabad in the 1980s, at a time when Afghan refugees were coming to Pakistan to flee the Soviet invasion. The war against the Soviets was dubbed as a great holy war in Pakistan, worthy of support and charity. But its consequences – millions of refugees seeking safety within Pakistan – were never welcome.

The conversation back then, as it is now, was largely xenophobic. In my hometown, all of the crimes in the city from theft to abduction to gun violence, were associated with the arrival of Afghan refugees (with little or no evidence).

I remember family members warning me to stay away from any Afghan, lest I be abducted. I was told that Afghans came to Pakistan to create chaos, to make our lives miserable, and to get US visas by jumping the queue.

“Pakistanis often rightfully complain that the West generalises all Muslims as terrorists, yet we follow the same approach in our own image of Afghans.”

I was never told that Pakistan was getting substantial aid and support from the United States and its allies during the Afghan-Soviet war. Nor was I told that the aid money supported the Pakistani economy and institutions that were benefiting us.

The rhetoric and omissions today seem eerily similar. Afghans, and Afghan refugees in particular, are vilified in private and in public. On television, in print and on social media, the discussion is largely devoid of humanity.

On one hand, Pakistanis often rightfully complain that the West generalises all Muslims as terrorists, yet we follow the same approach in our own image of Afghans.

There is no real discussion about the human cost of conflict, the pain and grief of loss and injury, or the fact that refugees are doing what anyone in their situation would do: seeking safety for themselves and their families.

There is also little recognition that we are living in a pandemic that continues to disproportionately impact the vulnerable and the poor.

No one should hope for a scenario whereby hundreds of thousands of Afghans flee their homes. But Pakistan’s insistence that it will absolutely not allow anyone to enter will create misery for innocent victims of conflict.

It’s also unlikely to work: If an acute humanitarian disaster emerges on its border, aid-dependent Pakistan is likely to come under intense international pressure from powerful nations and donors. Indeed, it already has: the United States wants Pakistan to keep its borders open (even as Afghans who worked for the US military face visa delays).

There’s a better way forward than the same vicious cycle of xenophobia, frustration, and mismanagement.

Pakistan has an opportunity to learn from its own history, and that of other nations, to create a better model that is inclusive, humane, and innovative. To do this, planners must better understand how refugees access healthcare and how collaborative approaches can improve the lives of refugees while at the same time allowing the local host community to benefit from new investments.

“If an acute humanitarian disaster emerges on its border, aid-dependent Pakistan is likely to come under intense international pressure from powerful nations and donors. Indeed, it already has.”

First, from a policy perspective, we have to recognise that refugee crises are different from disasters. Refugee crises are often protracted and require strategies that reflect both short-term needs – water, first aid, immunisation – and mid-to-long term challenges – mental health, trauma, chronic diseases, education.

In Pakistan, as well as globally, a significant number of refugees do not live in camps, and recognising this would allow for better planning early on.

Second, Pakistan must incentivise its research institutions and citizens to create innovative social, financial and technological solutions to help meet healthcare needs. From 3D printing of prosthetics to ethically designed digital innovations for disease diagnosis and management, there is an opportunity to strengthen refugee healthcare services in new ways.

The global innovation landscape is thriving and there is an appetite for solutions that are safe, effective, and meet rigorous ethical criteria. While support from large international donors is going to be critical, involving grassroots organisations will bring new, homegrown ideas.

Finally, Pakistanis also need to recognise that our common humanity is richer and deeper than the prevailing attitudes and assumptions about Afghans in need.

A more humane rhetoric, which recognises the human cost of war, will build bridges of trust with an international community interested in helping. It will also send a clear message to Afghans who have no choice in their displacement: It is not a crime to be a refugee.