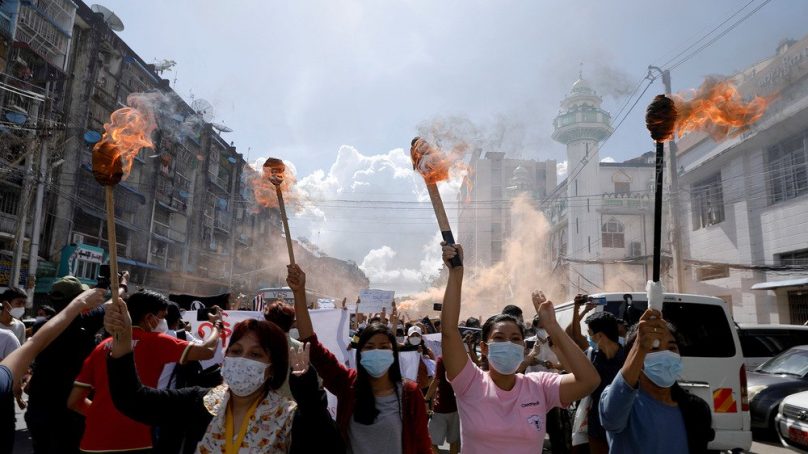 Myanmar’s people have clearly and universally rejected the coup and the military junta. Will international governments, donors and aid agencies do the same?

Six months after the February 1 coup, my country is locked in a humanitarian and Covid-19 crises.

The military junta has terrorised Myanmar, committing war crimes and crimes against humanity with total impunity. They have killed hundreds, arrested thousands and launched renewed attacks – including airstrikes – against civilians in the country’s ethnic states.

The coup violence has displaced at least 230,000 people, and there are shortages of cash, food, and medicine – particularly for those now surviving in makeshift jungle camps. On top of this, Covid-19 is spreading dangerously, yet the military has dismantled the healthcare system and targeted doctors and nurses participating in a nationwide civil disobedience movement.

The junta is callously weaponising medical treatment and oxygen as a form of collective punishment.

Myanmar’s humanitarian needs are overwhelming, but they cannot be met by engaging with the same perpetrators of the grave human rights abuses that relief aid intends to address. The humanitarian community prizes neutrality as one of its core principles; there is nothing neutral about engaging with the military junta.

Humanitarian access for international aid groups in Myanmar is dependent on “travel authorisations” overseen by the military. Access is frequently denied, and areas controlled by ethnic armed organisations are almost entirely blacklisted. In other words, aid is distributed in areas deemed worthy by the security forces of those claiming to represent the state – not those who are resisting it.

Myanmar’s junta is not the legitimate government; it is an illegal regime whose only power is in the weapons it uses to subjugate the population.

“Myanmar’s humanitarian needs are overwhelming, but they cannot be met by engaging with the same perpetrators of the grave human rights abuses that relief aid intends to address.”

Among people receiving aid or Covid-19 support, any collaboration with the junta could be perceived as an endorsement – undermining trust and confidence in humanitarian organisations. There is also a real danger that aid delivery can provide cover for soldiers entering previously hard-to-reach territories, or that the military will hoard aid and Covid-19 supplies, as has already been reported.

It is morally imperative that donors and humanitarian aid organisations stand with the people of Myanmar. A principled way to meet Myanmar’s substantial humanitarian needs is by directly supporting community-based civil society organisations – especially those that have operated cross-border during the country’s decades-long civil war against ethnic populations.

Coronavirus support, in particular, should be coordinated with the Covid-19 task force recently formed by ethnic health organisations and Myanmar’s government-in-waiting, the National Unity Government.

To work around these groups, rather than directly with them, represents a continued colonisation of aid practices – a denial of locals’ agency. Myanmar’s ethnic community-based and civil society organisations are representative of the populations they serve. They have the expertise, local legitimacy, and vision to offer an alternative to traditional aid distribution practices.

What these groups need at this critical time are funding and resources: cross-border community-based organisations have been largely abandoned by international donors over the last decade. During this period of supposed political reform in Myanmar, the international community shifted its funding to government-approved channels, despite insufficient and insincere changes, a failing peace process and an intensifying civil war.

This aid shift disregarded the very communities whose political predictions were right: The Myanmar military had enshrined its political power in its army-drafted 2008 constitution and was not undertaking a transition to democracy as it had claimed.

Today, an insistence on working through the Myanmar military junta – justified by a fetishised notion of humanitarian neutrality – obscures the undeniably political nature of humanitarian aid. Whose solutions are recognised in an emergency, who responds, how are resources distributed – these decisions are inherently political. Yet Myanmar’s coup crisis is an opportunity for a paradigm shift.

Donors and international organisations must prioritise meaningful and equal partnerships with local humanitarian groups. This means reviewing operations and budgets, with an eye to increasing direct, cross-border support.

Diplomatic and political pressure must be exerted on Myanmar’s neighbours to allow for unrestricted cross-border humanitarian operations and to ensure that those fleeing Myanmar are not turned away.

Donors and humanitarian organisations face a crucial choice. In Myanmar, requiring all humanitarian action to stick to the orthodox principle of neutrality means working with an illegitimate military junta. Instead, the international aid community can choose to support ethnic civil society organisations and the pro-democracy movement.

Military rule is the root cause of Myanmar’s human rights and humanitarian crises. Its permanent end, and the establishment of a federal democracy, can only be achieved by the people of Myanmar. International aid agencies can support our struggle by ensuring that the country’s vast humanitarian needs are met in a principled way.