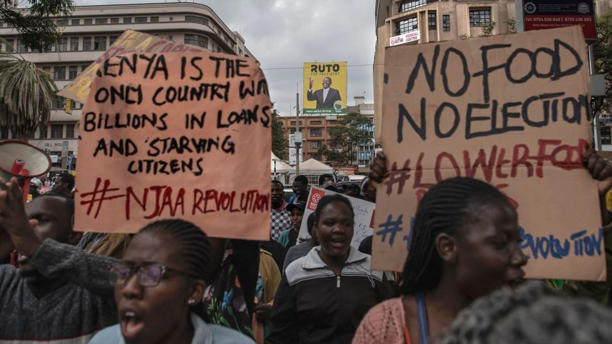 The cost of maize flour, used to make Kenya’s staple food, has been cut in half less than three weeks before general elections. The measure aims to deal with the rising cost of living that has seen prices of basic commodities soar.

A 2-kilogramme packet of maize flour will now retail at $0.84 (£0.70), instead of $1.77. Critics say outgoing President Uhuru Kenyatta is using the measure to influence the choice of his successor – Raila Odinga, who was his main rival in 2017 – in the August 9, elections.

President Kenyatta has rejected the accusation and said the price rises themselves were political.

“It is shocking to politicise the misery of the vulnerable… it’s more distasteful to gain political capital out of the sufferings of the vulnerable, without offering solutions,” he said in a speech after a meeting with millers in Nairobi on July 20.

His government has blamed external factors, including Russia’s invasion of Ukraine, for affecting the prices of fuel and food.

Annual inflation hit 7.9 per cent in June, with the cost of basic commodities such as food and non-alcoholic beverages rising by 13.8 per cent during the same period, according to the national bureau of statistics.

Most Kenyans determine the state of their lives by one thing – the price of basic commodities. The majority of households equate that to the cost of a 2-kilogramme packet of maize flour in the shops.

Maize meal is the key ingredient for “ugali” a local delicacy and staple food. It’s therefore not surprising that a directive to lower prices by Kenyatta on Wednesday created a buzz on mainstream media and on online social media platforms.

Kenyatta noted that the new prices had been achieved after days of negotiations between the government and the maize millers. His government has proposed to suspend a railway development levy charged on imported maize and the import declaration fee to achieve the new prices.

But the subsidy is not new. In 2017, the ministry of agriculture contracted nine millers to lower the cost of maize meal. However, the deal fell through after the millers accused the government of failing to pay them.

Is it an election campaign gambit?

With the election so close, any major government move is likely to be tied to the poll. Deputy President William Ruto, who is one of the main presidential candidates, has blamed the outgoing president, Uhuru Kenyatta, for using the subsidy to help his preferred successor – Raila Odinga.

“The government wants to reduce the price of unga [maize flour] because elections are near,” Ruto told supporters at a campaign rally in Nairobi. Kenyatta, without naming his deputy, said that some politicians were using the maize meal crisis to get political mileage.

While acknowledging that the ongoing drought in East and Horn of Africa had played a role, Kenyatta seemed to apportion most of the blame on profiteering by privately owned maize millers and political interference.

“If the politician gets his votes from the mischief and the miller gets profits, what does the citizen get?” the president said in a televised address. Odinga welcomed the subsidy announcement.

The subsidy also comes weeks after hundreds of people demonstrated in Nairobi against the high cost of living, so some experts have argued that the intervention was not necessarily politically motivated.

“Once prices of certain key commodities hit certain levels, it can bring considerable strain to the masses which can be very hard to govern,” economist Ken Gichinga said of the move by the president.

“We have seen instances in the past where it wasn’t an election year but government compelled oil marketers, for example, to maintain fuel prices,” he added.

What is a subsidy and how is it applied? It is a sum of money given by the state or a public body to help businesses keep the price of a commodity low. A subsidy can also be given to industries to help them compete in the market.

For example, earlier in the year the government announced a $48.1 million fertiliser subsidy to help farmers afford fertiliser.

This, in turn, would improve their harvest, and allow them to sell their produce at competitive prices. Without the subsidy, the price of the produce would be too high and therefore uncompetitive. Faced by unfavourable conditions in the global oil market, Kenya has had to contend with rising fuel prices in the last year.

Most recently, the government rolled out a $141 million subsidy for petrol prices between July and August. Without the subsidy, a litre of petrol in the Nairobi would have hit $1.8. At the moment, a litre of super petrol is retailing at $1.34.

The country has also revived a subsidy for cooking gas, and will spend some $4.28 million in this financial year (July 2022 to June 2023) to keep prices low.

Consumer subsidies have attracted criticism from some economists experts, who argue that commodity prices should be determined by a free market – demand and supply.

“It doesn’t work,” Nikhil Hira, a tax partner at Kody LLP (Nairobi), explained. “We have to make up our minds. Are we a liberalised economy with no price controls or are we going to select commodities that we need to put price controls on?” he added.

Subsidies also tend to put pressure on a country’s tax resources, while locking out vulnerable households and benefiting people who can afford the goods, according to the International Monetary Fund Africa Director Abebe Selassie.

Kenya’s ability to afford the subsidies, too, is open to question. At the moment, the country is spending a huge portion of its annual budget to repay its national debt. Previously, the government has failed to meet its obligations to private sector companies when such subsidies are involved.

The 2017 maize subsidy plan ended up in court – with maize millers and importers accusing the state of failing to pay its bills as agreed. The bill was eventually settled in 2021, four years after the deal, when the government allocated $107 million in its supplementary budget.

“People are not getting paid… the amount of money owed to the private sector by government could turn the country around in a big way,” says Nikhil.