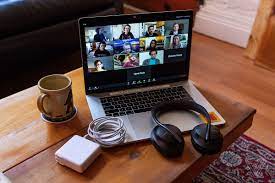 The pandemic has immersed us faster and deeper in immersive communication technologies. It’s a disrupted, confusing, sometimes exhausting world, but shifting both the tech and our expectations might make it a better one.

I am sitting in a darkened room, listening to upbeat music of the type often used at tech conferences to make attendees feel they are part of Something Big, waiting in eager anticipation for a keynote speaker to appear.

Bang on time, virtual communication expert Jeremy Bailenson arrives on the digital stage. He is here at the American Psychological Association’s November meeting, via a videoconferencing app, to somewhat ironically talk about Zoom fatigue and ways to battle it.

“In late March, like all of us, I was sheltered in place,” Bailenson tells his invisible tele-audience. “After a weeklong of being on video calls for eight or nine hours a day, I was just exhausted.”

One of the pandemic’s many impacts was to throw everyone suddenly online – not just for business meetings but also for everything from birthday parties to schooling, romantic dates to science conferences. While the Internet thankfully has kept people connected during lockdowns, experiences haven’t been all good: There have been miscommunications, parties that fall flat, unengaged schoolkids.

Many found themselves tired, frustrated or feeling disconnected, with researchers left unsure as to exactly why and uncertain how best to tackle the problems. Sensing this research gap, Bailenson, director of Stanford University’s Virtual Human Interaction Lab, and colleagues quickly ramped up surveys to examine how people react to videoconferencing and this February published a “Zoom Exhaustion & Fatigue Scale” to quantify peoples’ different types of exhaustion. They found that having frequent, long, rapid-fire meetings made people more tired; many felt cranky and needed some alone time to decompress.

This reality comes in contrast to the rosy views painted by many enthusiasts over the years about the promises of tech-mediated communication, which has evolved over recent decades from text-based chat to videoconferencing and the gathering of avatars in virtual landscapes.

The dream is to create ever more immersive experiences that allow someone to feel they are really in a different place with another person, through techniques like augmented reality (which projects data or images onto a real-life scene), to virtual reality (where users typically wear goggles to make them feel they are elsewhere), to full-blown systems that involve a user’s sense of touch and smell.

Photograph of a smiling woman wearing goggles over her eyes, her arms in front of her. A man stands to one side ready to catch her should she trip and fall. Behind them, a projector screen shows an underwater scene with fish and other marine life.

A woman wears VR goggles in the Stanford Virtual Human Interaction Lab while communication expert Jeremy Bailenson spots her to ensure her safety. The image on the projector shows what the woman is seeing. Virtual reality isn’t yet developed enough to have served as a widespread way to communicate and stay close during Covid, but the technology is advancing. Should we be unlucky enough to go through something like this a decade or so down the road, experts predict there will be far more deeply immersive ways to stay connected to those we love or work with.

The vision is that we would all be sitting in holographic boardrooms by now; all university students should be blowing up virtual labs rather than physical ones; people should feel as comfortable navigating virtual worlds and friendships as in-person realities.

On the whole, this hasn’t yet come to pass. Highly immersive technologies have made inroads in niche applications like simulation training for sports and medicine, along with the video gaming industry, but they aren’t mainstream for everyday communication.

The online environment Second Life, launched in 2003, offered a parallel online world as a companion space to the physical one; it saw monthly active users drop from a million in 2013 to half that in 2018. Google Glass, which aimed to provide augmented reality for wearers of a special camera-enabled pair of glasses, launched in 2013 mostly to widespread mockery.

Researchers at Stanford’s Virtual Human Interaction Lab developed a scale to measure different dimensions of Zoom fatigue. You can test your fatigue here, and read about the research here.

The following are descriptions of fatigue dimensions as discussed by Nicolas Jones:

General Fatigue relates to the superordinate experience of being tired

As Zoom fatigue has highlighted, the road to more immersive technologies for communication aren’t always a smooth one. But experts across fields from education to communication, computer science and psychology agree that deeper immersion still holds great promise for making people feel more connected, and they are aiming to help navigate the bumpy road to its best adoption. “I hope that no pandemic ever happens again, but if it does, I hope we have better technologies than we have now,” says Fariba Mostajeran, a computer scientist who studies human-computer interaction and virtual reality at Hamburg University. “For people who live alone, it has been really hard not to be able to hug friends and family, to feel people. I’m not sure if we can achieve those 10 years from now, but I hope we can.”

For distanced communication to live up to its full potential, “there will need to be an evolution,” Bailenson writes me, “both on the technology and on the social norms.”

It takes a while for societies to adapt to a new form of communication. When the telephone was first invented, no one knew how to answer it: Alexander Graham Bell suggested that the standard greeting should be “Ahoy.”

This goes to show not just that social use of technology evolves, but also that the inventors of that technology are rarely in the driver’s seat.

Email has danced between being extremely casual and being as formal as letter-writing as perceptions, expectations and storage space have shifted. Texting, tweeting and social media platforms like Facebook and Snapchat are all experiencing their own evolutions, including the invention of emojis to help convey meaning and tone.

Ever since prehistoric people started scratching on cave walls, humanity has experimented with the best ways to convey thoughts, facts and feelings.

Some of that optimisation is based on the logistical advantages and disadvantages of different platforms, and some of it is anchored in our social expectations. Experience has taught us to expect business phone calls to be short and sharp, for example, whereas we expect real-life visits with family and friends to accommodate a slow exchange of information that may last days.

Expectations for video calls are still in flux: Do you need to maintain eye contact, as you would for an in-person visit, or is it okay to check your email, as you might do in the anonymity of a darkened lecture hall?

Vaccinating adults has double benefit of protecting children against Covid