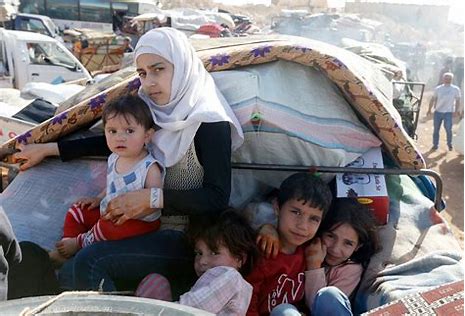 One million refugees at risk of being denied access to food, medical support if UN withdraws from Syria

Faced with the dilemma of access to Syrian refugees who need for and medical supplies senior United Nations staff says NGOs will be able to scale up their work, only after a compromise is reached between the government, Russia and the UN Security Council.

However, the officer pointed that the existing gap would widen were the United Nations to withdraw humanitarian support because of the intransigence of the Syrian government and Russian blockade. As a result, the source said, around one million Syrians would be deprived of food assistance.

From a humanitarian standpoint, the issue seems clear cut. But al-Assad and his Russian allies view the UN’s ability to cross into Idlib without requesting permission as an affront to Syria’s sovereignty. They want aid flows to be rerouted through Damascus, where the government can control operations by selectively granting or withholding security permits and where dollarised procurement would help prop up the flagging economy.

Year after year, Moscow has used its veto powers to wear down the cross-border mechanism, gradually curtailing UN access to a single border crossing from Turkey into the Idlib region.

More recently, Russia has explicitly conditioned its toleration of cross-border access on two things: more Western-funded long-term resilience and early recovery aid to Syria, and more aid being shipped from Damascus (“cross-line”, as it is known in humanitarian jargon).

On early recovery, Russia’s demands have more or less won the day, but progress on cross-line work from Damascus has been slow.

The relatively low levels of convoys from Damascus to Idlib suggest to aid workers and donor governments that this route cannot replace the Turkey-based operation. But Russia sees it differently, suspecting the deliberate slow-rolling of a Security Council decision.

The root of the problem is that cross-line convoys require the approval of both al-Assad’s regime and Idlib’s Turkey-backed rebels, since they would move in territory controlled by both. Each party can block a convoy simply by notifying the UN that they cannot guarantee safe passage.

They can use this power of veto as a negotiating tool, guaranteeing constant deadlocks and procrastination.

Ankara and the Idlib rebels view the Damascus convoys as a Russian-inspired scheme to replace the cross-border response and help al-Assad infiltrate their region, which has led them to approve only a minimal amount of cross-line access.

For their part, the Syrian and Russian governments want a bigger role in how and where aid is distributed, and are furious that the UN has not dispatched more in-country convoys.

“Russian diplomacy has a paradoxical interest in the survival of the cross-border system that it loves to hate.”

Russia’s dislike of the UN’s ability to enter northwest Syria as it sees fit is genuine, as is its desire to reinforce al-Assad’s position. But hardline public statements, like when Russian UN representative Dmitry Poliyansky warned in May that the slow pace of cross-line work “leaves us no reason to preserve the cross-border mechanism”, may not tell the whole story.

In fact, Russian diplomacy has a paradoxical interest in the survival of the cross-border system that it loves to hate, given that every time it is about to expire, Moscow gets to milk its rivals for favours.

By agreeing to only short-term extensions of the cross-border resolution in the Security Council (lately they have been six months), Russia forces Americans, Europeans, and Turks to regularly plead for Russian cooperation, whereas a veto would be final.

Plus, after being ostracised by Western nations over its invasion of Ukraine, Russia now has even stronger incentives to engage its rivals on an issue where it holds the stronger hand.

Then there is the risk of major instability. A veto would trigger an even greater humanitarian emergency, potentially driving hundreds of thousands of desperate Syrians towards the walled and armed (but sometimes permeable with the help of smugglers) Turkish border. It could also rekindle a conflict that Russia wants to portray as over, despite the fact that al-Assad still doesn’t control Idlib or some other pockets of the country.

It’s unlikely Moscow is in the mood for a new round of full-on fighting in Syria, given that its military is bogged down in Ukraine, and that Turkey has made resupplying Russian forces in Syria harder by blocking naval traffic from the Black Sea and banning Russian overflight to Syria. The possibility that a veto could trigger a furious reaction from Turkey is, in fact, one of the most important reasons Russia may seek a compromise this time around.

Unlike most NATO members, Turkey is still trying to maintain good ties with Russia, refusing to isolate or sanction the Kremlin for its role in Ukraine. It has also recently angered other NATO members by blocking a joint Finnish-Swedish application for membership in the alliance.

From Russia’s point of view, Turkey is far from a trusted long-term diplomatic partner, but it is not nearly as difficult or hostile as it could be, and it excels at generating intra-NATO tension. The Kremlin presumably wants to keep it that way. Then again, if there is to be a deal, there will first need to be diplomacy.

Throughout the Syrian conflict, Russian-American agreement has been a precondition for successful Security Council action. US-Russia negotiations have often absorbed significant amounts of diplomatic bandwidth.

In 2021, President Joe Biden himself was involved in persuading Russia to approve another year of cross-border aid. But since the Ukraine invasion, high-level American-Russian contacts are almost non-existent.

“That type of diplomacy and negotiation doesn’t seem possible this time around,” Sam Heller, a Century International* fellow who closely tracks Syrian aid politics, says. In other words, even if Moscow is open for business, high emotions and a dearth of diplomatic contact could prevent the sort of detailed talks needed to pass a resolution.

“I don’t know what will happen,” Heller said, “but I am worried.”