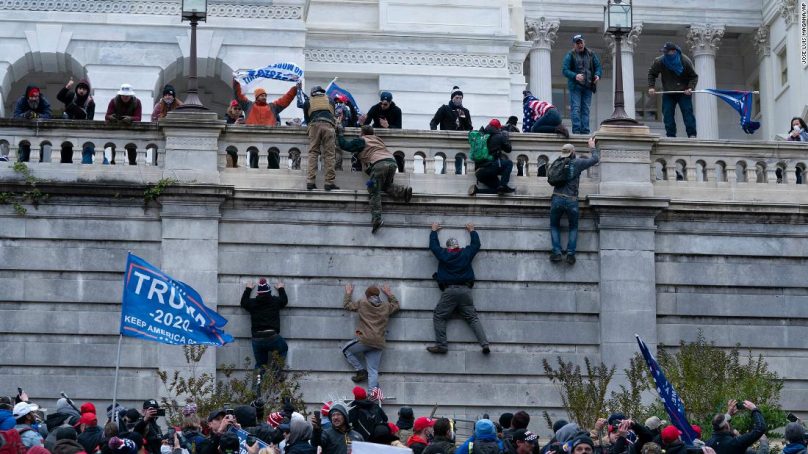 President Donald Trump on Thursday finally pledged to an orderly transfer of power to President-elect Joe Biden while repeating false claims about the 2020 election that led a mob of his supporters to storm the US Capitol and delay Congress’ affirmation of Biden’s Electoral College win.

“Even though I totally disagree with the outcome of the election, and the facts bear me out, nevertheless there will be an orderly transition on January 20th,” Trump said in the statement released overnight after Congress certified his defeat.

“I have always said we would continue our fight to ensure that only legal votes were counted. While this represents the end of the greatest first term in presidential history, it’s only the beginning of our fight to Make America Great Again,” Trump said.

Trump, who has repeatedly refused to concede the election, on Wednesday egged on his supporters who would later breach the US Capitol in an attempt to stop lawmakers from counting the electoral votes cast in the 2020 presidential election.

“We’re going to walk down to the Capitol. And we’re gonna cheer on our brave senators and congressmen and women. And we’re probably not going to be cheering, so much for some of them, because you’ll never take back our country with weakness, you have to show strength and you have to be strong,” Trump said addressing his supporters who gathered mask-less on the ellipse near the White House Wednesday morning.

After a speech filled with lies and misrepresentations that incensed the crowd, Trump returned to the White House to watch a violent crescendo to his constant spreading of misinformation about the electoral process. The mob broke into the Capitol, stormed both the House and Senate floor and Trump supporters could be seen lounging in House Speaker Nancy Pelosi’s office.

A woman was shot and killed in the chaos. Police have yet to release more details about her death. Three others had medical emergencies and died, according to police.

Republicans and Democrats alike condemned the rioters for entering the country’s legislative chambers and destroying federal property and several lawmakers blamed Trump for the violence that broke out.

The riot led to at least four resignations from the Trump administration and some in Trump’s cabinet to hold preliminary talks about invoking the 25th Amendment to remove him from office, according to a well-placed GOP source.

In remarks on Wednesday afternoon, Biden called on Trump to appear on national television “to fulfil his oath and defend the Constitution and demand an end to this siege.”

Trump, instead, released a taped video statement on social media, addressing the rioters and urged them to “go home.” But Trump, who campaigned on a message of “law and order” also appeared to sympathise with them, saying, “We love you. You are very special.”

Trump’s video, in which he also repeated his unfounded claims about a stolen election, was removed by Twitter and Facebook for what the companies claimed was an attempt to prevent further violence.

Multiple people told CNN that Trump was borderline enthusiastic over the protests and did not wish to condemn them. He only agreed to record a short video after multiple staffers and Republican lawmakers lobbied him to make a statement.

Trump has yet still to condemn the violence at the US Capitol on Wednesday.

On Wednesday night, once the Capitol was secured again, lawmakers returned from lockdown to the House and Senate chambers, undeterred by the violence and the threats, to continue counting the votes nearly six hours after the crowd wreaked havoc on America’s symbol of democracy.

The House and Senate defeated Republican objections lodged against the votes sent by two states, Arizona and Pennsylvania. Before 4am, the joint session of Congress had completed tallying up the electoral votes and Vice President Mike Pence, who presided over the count, declared that Biden won the Electoral College by 306 votes to 232 for Trump.

Trump did not say in his statement whether he plans to attend the inauguration of Biden and Vice President-elect Kamala Harris on January 20.