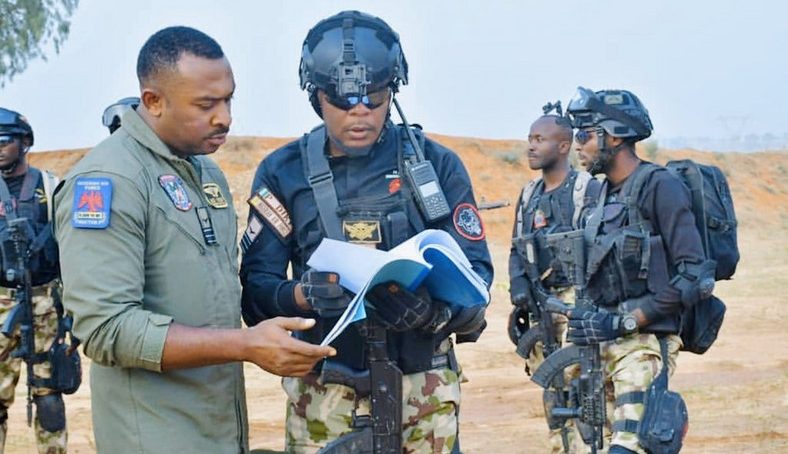 The premiere of ‘Eagle Wings’, Nigeria’s first military-themed movie was held at the Blue Pictures Cinema, Lagos City Mall in the second Sunday of March this year.

The film, which is a collaboration between the Nigerian Film Corporation (NFC) and the Nigerian Airforce, tells the story of how the military combats insecurity with officers risking their lives to protect the nation.

‘Eagle Wings’ follows the story of an Air Force Fighter pilot who must navigate his way to safety amid an insurgency.

The movie based on true events, stars Femi Jacobs, Enyinna Nwigwe, Yakubu Mohammed, Uzee Usman, and Paul Apel Papel who doubles as both director and writer.

Others are Funky Mallam, Nazareth Jesse, Saeed Mohammed, Abdul U. Zada, Patience Ujah among others.

The late movie veteran, Sadiq Daba, also starred in the film, playing the role of the president of Nigeria. The producers didn’t use fictional names of states or countries in the film.

Speaking at the premiere, the MD of the Nigerian Airforce (NAF) investment limited, Uche Nwagwu, said the film brings to the fore an epic tale of the fight for life, peace and love of our great nation.

“This moving story captures the efforts, sacrifices and impact of the Nigerian Air Force and indeed the Armed Forces of Nigeria, in our collective fight against the twin evils of terrorism and insurgency for which a lot have paid the supreme price.

“Eagle Wings is the first of its kind to be made in Nigeria, in terms of the technical excellence and realism in the portrayal of the Nigerian Military,” the air vice marshal said.

Premium Times had reported the partnership between the Armed Forces of Nigeria and the Nigerian Film Corporation on the production of movies to tell the story of the Nigerian Military from the right perspective.

“Eagle Wings” is a story of the Nigerian Armed Force that depicts various aspects of counter-insurgency operations showing the resilience and dedication of officers and men to end violence and restore peace and security in the face of unrepentant terrorists.

The film was produced in line with global best practices, it was shot using cameras equipped with Anamorphic Open-Gate Lens – a first of its kind in Nollywood.

Speaking to Premium Times at the movie premiere, Eyinna Nwigwe, the lead actor said the movie is a national treasure that tells the story of bravery, camaraderie, love and humanity.

He said the film will enlighten Nigerians on how the military functions and what they go through trying to secure lives and properties.

“The kind of support we got from the Nigerian Air Force was mind-blowing, we filmed across different air force bases, we filmed in Kaduna, Abuja and Maiduguri. I didn’t know they would be as supportive as they were, it was amazing, without missing or losing any sense of security in the process.

“Giving us access to the equipment that we used, the fighter jets, automated rifles and manpower, it is amazing. The support is something I have never experienced in my organisation in film,” he said.

Speaking about the production, the producer and director of the film, Mr Papel said the Nigerian Air Force provided the necessary financial support, equipment, training, and personnel to ensure the successful production of the movie.

He said the filming took place from February to April 2020 in various locations across Kaduna, Abuja, and Maiduguri with “unparalleled technical support and guidance from the Nigerian Air Force.”

Kenya and US agree to ‘broaden and strengthen’ security partnership