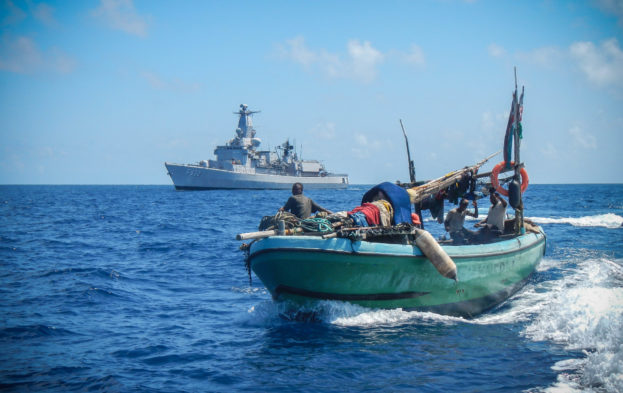 Piracy in the northern Indian Ocean has decreased over the last decade, and now the greatest threat to seafarers in the region is state-backed threats against shipping, particularly in the waters around Yemen, a new report reveals.

In Dryad Global’s annual report for 2021/22, the maritime risk company notes that since the end of 2012, incidents of piracy within the northern Indian Ocean have gradually given way to complex geopolitical narratives. “2021 saw another year of commercial operators contending with the risks of operating within an environment that is broadly defined by state based or state backed threats against shipping,” Dryad said.

“Whilst traditional maritime security threats are almost negligible throughout an area once plagued by piracy, the contemporary operating environment within 2021 has seen another year of threats that pose significant questions for the future securitisation of commercial shipping.

One of the most striking features of the maritime security landscape within 2021 was the apparent feeling of impotence by commercial operators in the face of asymmetric and state-backed threats. Indeed, the change from old foes to new has given rise to an uncomfortable new reality that sees commercial operators with limited recourse to mitigate these threats.”

Measures such as vessel hardening and embarked armed security personnel – successful against Somali pirates – was of little utility in the face of evolving threats.

With the reduction of the Indian Ocean High Risk Area (HRA) in 2021 and a further reduction expected within 2022, it is clear that the traditional narrative of threat and risk within the Indian Ocean is changing, Dryad said, with commercial operators increasingly questioning the need for risk premiums in areas absent of risk for several years. The reduced risk saw many commercial operators do away with armed guards in 2021 in the region.

“It would be short-sighted to assume that traditional maritime threats such as piracy may never return,” Dryad cautioned, especially for states like Somalia that face uncertain futures. Economic disruption caused by the Coovid-19 pandemic could create a climate where support programmes are withdrawn, offshore counter-piracy infrastructure has declined, and foreign commercial entities begin prospecting for offshore resources, which could easily serve as a future impetus for a return of traditional maritime security issue in the medium to long term.

While pirate activity essentially ceased off Somalia in 2021, Dryad reports that last year six incidents were recorded within the Gulf of Aden, and Bab al Mandab Strait. All were recorded as suspicious approaches, significantly less than the 13 recorded within 2020, which also included three incidents that could be reasonably characterised as attacks.

“In many areas surrounding the Gulf of Aden and lower Red Sea the identifiable circumstances in which piracy is known to flourish remain prevalent, yet the absence of any tangible incident that can reasonably be classed as an attempt at piracy remains fundamentally at odds with this often-reported feature,” Dryad stated.

Although 2021 was a relatively benign year for Houthi maritime activity, Dryad believes it is highly likely that previous trends of incident reporting will likely continue to feature throughout the region into 2022.

Historically Houthi rebels are known to utilise several methods of opposing Saudi forces within the area. These include the boarding and detention of vessels operating in support of the Saudi coalition and the deployment of remote-controlled waterborne improvised explosive devices (RC-WBIEDs) and anti-ship missiles (ASMs). In addition, several groups are known to have deployed a range of sea mines throughout the coastal area.

Water-Borne Improvised Explosive Devices (WBIED) have played a role in previous attack patterns of Houthi units within the area, with particular focus on the Saudi ports of Jizan and Al Shuquaiq due to their proximity to Saudi-Yemen border as well as the Yemeni port of Salif.

This indicates the ability of threat actors to conduct such attacks significantly beyond their normal area of operations. Where deployed, targets are likely to include Saudi and UAE maritime traffic, and vessels suspected of supporting the Saudi coalition in Yemen.

The UAE is further from Yemen and shares no borders with the country. However, Houthi rebels have displayed their capability in targeting at significant distances using drones. In line with previous targeting methodology, Saudi Red Sea ports are assessed to be at increased risk of targeting via the use of WBIED and or missile/drone strikes, Dryad said.

Previous activity by Houthi rebels has also involved the targeting of Saudi flagged vessels in transit via the use of rockets, often launched within the vicinity of the Hanish Islands. Threat of naval mines has previously been reported in coastal waters between Midi, Yemen and Jizan, Saudi Arabia.

Sadaf-type naval mines were discovered in May 2021 by Saudi authorities, implicating Iran in naval activities off the Yemeni coast. This continued in early June 2021 when Joint Forces squads discovered a network of mines through the Hanish Archipelago.

“Despite the comparatively broad threats faced throughout the area, the risk remains highly localised to the areas mentioned and is not likely to impact wider commercial shipping transiting the region,” Dryad concluded.