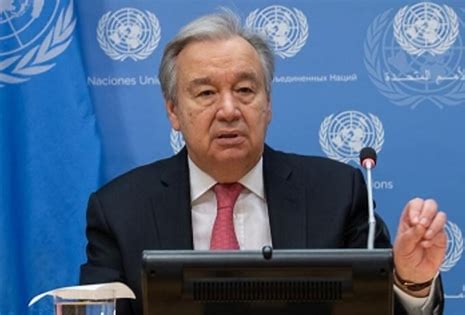 The world is facing highest number of violent conflicts since 1945, from Yemen to Syria, Myanmar and Sudan and now the catastrophic war in Ukraine, United Nations Secretary General Antonio Guterres has said.

Speaking about a report on Peacebuilding and Sustaining Peace, Guterres said peace is the most important task at the United Nations, but grows larger by the day. The war in Ukraine is now “shaking the foundations of the international order, spilling across borders and causing skyrocketing food, fuel and fertiliser prices that spell disaster for developing countries.”

“Resources are being diverted away from badly needed support to address the sharp increases in hunger and poverty resulting from Covid-19. Around the world, we are seeing military coups and seizures of power by force.  A perilous sense of impunity is taking hold.

“On the other hand, nuclear arsenals are growing. Human rights and international law are under assault.  The spirit and letter of the United Nations Charter are being flouted.  Criminal and terrorist networks are fuelling – and profiting from – divisions and conflicts.

“And as always, the poorest and most vulnerable pay the highest price,” Guterres said, with a quarter of humanity living in conflict-affected areas, or two billion people. “Last year, 84 million were forcibly displaced because of conflict, violence and human rights violations. And this year, we estimate that at least 274 million will need humanitarian assistance. All of this is taking place at a moment of multiplying risks that are pushing peace further out of reach – inequalities, Covid-19, climate change and cyberthreats, to name just a few.”

Guterres said the Peacebuilding and Sustaining Peace report contains a number of examples in which the United Nations is working to advance peace and prevent conflict, from Côte d’Ivoire, where the UN worked with communities to ease tensions following the 2020 presidential election and created conditions for an inclusive political dialogue, to Iraq, Central African Republic and the Great Lakes region.

“Peacebuilding works – it is a proven investment.  As you know, we’ve developed a series of mechanisms to expand and grow the resources required to deliver. And we’re making progress.  For example, the Peacebuilding Fund has been steadily growing – investing $195 million last year,” he said.

However, the needs far outpace resources and the Fund has been forced to scale back allocation targets over the last three years. Guterres urged member states to finance peacebuilding and invest in all the tools of prevention — including stronger early warning systems, mediation capacities, and strategic data and analytics to address hate speech and detect and avoid looming crises.

“Over the last decade, the world has spent over $349 billion on peacekeeping, humanitarian relief and refugee support. And global military expenditures rose to nearly $2 trillion in 2020. But let’s not forget that war’s greatest cost is its human toll. Countless innocent lives lost over the decades. People wounded and maimed by the fighting. Lost generation after lost generation of children whose education and development have been cruelly snatched away. Refugees and internally displaced people forced to flee their homes. Schools, hospitals, playgrounds, homes and entire neighbourhoods levelled. When we consider the costs of war – to the global economy but most of all to humanity’s very soul – peacebuilding is a bargain and a prerequisite for development and a better future for all,” Guterres said.