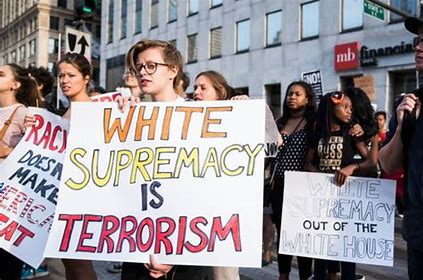 As a national narrative, Smart America has a tenuous sense of the nation. Smart America doesn’t hate America, which has been so good to the meritocrats. Smart Americans believe in institutions and they support American leadership of military alliances and international organisations.

But Smart Americans are uneasy with patriotism. It’s an unpleasant relic of a more primitive time, like cigarette smoke or dog racing. It stirs emotions that can have ugly consequences. The winners in Smart America – connected by airplane, internet and investments to the rest of the globe – have lost the capacity and the need for a national identity, which is why they can’t grasp its importance for others.

Their passionate loyalty, the one that gives them a particular identity, goes to their family. The rest is diversity and efficiency, heirloom tomatoes and self-driving cars. They don’t see the point of patriotism.

Patriotism can be turned to good or ill purposes, but in most people it never dies. It’s a persistent attachment, like loyalty to your family, a source of meaning and togetherness, strongest when it’s hardly conscious. National loyalty is an attachment to what makes your country yours, distinct from the rest, even when you can’t stand it, even when it breaks your heart.

This feeling can’t be wished out of existence. And because people still live their lives in an actual place, and the nation is the largest place with which they can identify – world citizenship is too abstract to be meaningful – patriotic feeling has to be tapped if you want to achieve anything big.

If your goal is to slow climate change or reverse inequality, or stop racism or rebuild democracy, you will need the national solidarity that comes from patriotism.

That’s one problem with the narrative of Smart America. The other problem is that abandoning patriotism to other narratives guarantees that the worst of them will claim it.

In the fall of 2008, Sarah Palin, then the Republican nominee for vice president, spoke at a fundraiser in Greensboro, North Carolina. Candidates reserve the truth for their donors, using the direct language they avoid with the press and the public (Obama: “cling to guns or religion”; Romney: the “47 per cent”; Clinton: “basket of deplorables”) and Palin felt free to speak openly.

She said, “We believe that the best of America is in these small towns that we get to visit,” she said, “and in these wonderful little pockets of what I call the real America, being here with all of you hardworking, very patriotic, very pro-America areas of this great nation. Those who are running our factories and teaching our kids and growing our food and are fighting our wars for us.”

What made Palin alien to people in Smart America prompted thousands to stand in line for hours at her rallies in “Real America”: her vernacular (“You betcha,” “Drill, baby, drill”); her charismatic Christianity; the four colleges she attended en route to a degree; her five children’s names (Track, Bristol, Willow, Piper, Trig); her baby with Down syndrome; her pregnant, unwed teenage daughter; her husband’s commercial fishing business; her hunting poses. She was working-class to her boots. Plenty of politicians come from the working class; Palin never left it.

She went after Barack Obama with particular venom. Her animus was fueled by his suspect origins, radical associates, and redistributionist views, but the worst offense was his galling mix of class and race. Obama was a Black professional who had gone to the best schools, who knew so much more than Palin, and who was too cerebral to get in the mud pit with her.

Palin crumbled during the campaign. Her miserable performance under basic questioning disqualified her in the eyes of Americans with open minds on the subject. Her Republican handlers tried to hide her and later disowned her. In 2008, the country was still too rational for a candidate like Palin. After losing, she quit being governor of Alaska, which no longer interested her and started a new career as a reality-TV personality, Tea Party star and autographed-merchandise saleswoman.

Palin kept looking for a second act that never arrived. She suffered the pathetic fate of being a celebrity ahead of her time. Because with her candidacy something new came into our national life that was also traditional. She was a western populist who embodied white identity politics – John the Baptist to the coming of Trump.

Real America is a very old place. The idea that the authentic heart of democracy beats hardest in common people who work with their hands goes back to the eighteenth century. It was embryonic in the founding creed of equality. “State a moral case to a ploughman and a professor,” Thomas Jefferson wrote in 1787.

“The former will decide it as well and often better than the latter, because he has not been led astray by artificial rules.” Moral equality was the basis for political equality. As the new republic became a more egalitarian society in the first decades of the nineteenth century, the democratic creed turned openly populist.

Andrew Jackson came to power and governed as champion of “the humble members of society – the farmers, mechanics, and laborers,” the Real Americans of that age.

The Democratic Party dominated elections by pinning the charge of aristocratic elitism on the Federalists, and then the Whigs, who learned that they had to campaign on log cabins and hard cider to compete.

The triumph of popular democracy brought an anti-intellectual bias to American politics that never entirely disappeared. Self-government didn’t require any special learning, just the native wisdom of the people. “Even in its earliest days,” Richard Hofstadter wrote, “the egalitarian impulse in America was linked with a distrust for what in its germinal form may be called political specialisation and in its later forms expertise.”

Hostility to aristocracy widened into a general suspicion of educated sophisticates. The more learned citizens were actually less fit to lead; the best politicians came from the ordinary people and stayed true to them. Making money didn’t violate the spirit of equality, but an air of superior knowledge did, especially when it cloaked special privileges.

The overwhelmingly white crowds that lined up to hear Palin speak were nothing new. Real America has always been a country of white people. Jackson himself was a slaver and an Indian-killer, and his “farmers, mechanics, and laborers” were the all-white forebears of William Jennings Bryan’s “producing masses,” Huey Long’s “little man,” George Wallace’s “rednecks,” Patrick Buchanan’s “pitchfork brigade,” and Palin’s “hardworking patriots.”

The political positions of these groups changed, but their Real American identity – their belief in themselves as the bedrock of self-government – stayed firm. From time to time the common people’s politics has been interracial – the Populist Party at its founding in the early 1890s, the industrial-labour movement of the 1930s – but that never lasted.

The unity soon disintegrated under the pressure of white supremacy. Real America has always needed to feel that both a shiftless underclass and a parasitic elite depend on its labour. In this way, it renders the Black working class invisible.