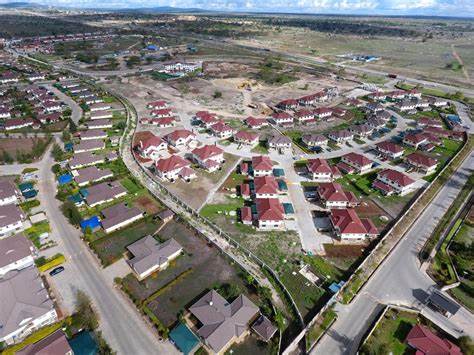 Nairobi’s dispersion to the outlying areas took another turn towards the decongestion and modernisation last month following the approval of development of a smart city project in Athi River, some 30 kilometres southeast of the Kenyan capital’s central business district.

The project will cost a total of Ksh5 trillion ($45 billion) to complete.

With a burgeoning population of about five million, which sometimes peaks to 10 million during the day, putting pressure on existing social and physical amenities, has seen investments relocate from Nairobi to neighbouring counties as the cost of doing business in the capital spirals out of control because the “push out factor”.

The skilled and diverse workforce available in and around Nairobi is an incentive for investors keen on underserviced markets, especially in Africa, the personalities behind the Athi River Smart Green City aver.

The government is gradually acceding to the need to make Nairobi more investment friendly. Thus, to make Nairobi more business-friendly the government, through a gazette notice No.13 of 2019, that was published on August 21, 2021 and signed by the director of physical planning in the Ministry of Lands and Planning Augustine K. Masinde, a consortium of Kenyan, German, Israeli and Middle East companies has been given the greenlight to build a “smart city” in line with its development plan dubbed Big Four Agenda.

In the notice run in local newspapers as advertisement says, “The project is of national importance as it contributes to the implementation of the Big Four Agenda i.e. Affordable Housing, Universal Health Care, Manufacturing and Food Security. The affordable housing programme seeks to develop 500,000 housing units by 2022.”

The ministry says the greenlight to the private sector to take participate in the delivery of the Big Four Agenda – a development blueprint that was conceived in 2018, but which has run into headwinds a result of wobbly economy, among other factors.

“The government plans to support the programme by setting aside this land (in Athi River) for delivery of affordable housing alongside other supporting infrastructure,” the statement by the ministry says,

The project on roughly 5,000 acres of land, will upon completion, include 60,000-plus capacity multidiscipline sports arena, a 10,000-bed capacity hospital, five-star hotels, shopping malls, residential houses, an international airport and modern railway station.

According to JetBlack Energy Group President Elisha Keshoney, the envisaged Athi Smart Group Green City comprises eight sectors. Asked about specifics, Mr Keshoney, who chairs the project, clarified that the Athi Sports City has been allocated an investment of up to Ksh770 billion ($7 billion) – multiple times more than the value of all the sports facilities in the country.

“We have several partners, including Hillshaw Group from Dubai who are committed to syndicating an investing equivalent to $7 billion ($770 billion) for the green city sector 1 (phase one). We have also some American investors and Turkish (investors) looking seriously at the Athi Medical Centre at the Smart City, while an Israeli group is keen on the education sector. An American firm is also keen on the Agri-business,” Keshoney explained via a WhatsApp interview.

Significantly, the medical facility is inspired by the number of Africans seeking treatment in India, America and Europe. According to Keshoney, it is easier and cheaper to fly in specialists treat patients compared to the cost and risks of flying patients to foreign hospitals.

There is a provision for an education district that will cater for preschool up to university that is expected to cost Ksh550 billion ($5 billion) and an international airport to supplement Jomo Kenyatta International Airport that is less than 10 kilometres north of the Smart City. The airport will cost Ksh220 billion ($2 billion).

Besides the two airports, the city will be served by the Nairobi-Mombasa Road as well as the standard gauge railway, which with time will be transformed into electric railway.

The Athi River Green City is the fourth such project to be mooted in Nairobi and its environs. About 64 kilometres southeast of Nairobi les the Konza Technopolis City that has been in gestation for nearly 20 years with the government having ploughed in huge sums of money in the country’s Vision 2030 Development Marshal Plan. Konza Techno City borrows from America Silicon Valley and has been envisaged to become Africa’s technology hub. It will cost the government Ksh1.2 trillion ($14.5 billion) complete.

Earlier, Keshoney told local media, “Megaprojects like Athi River Smart Green City are only possible as a joint collaboration of experts, the public and private sectors, and like-minded visionaries. Similarly, evolutionary plans can only be achieved in the presence of teams and partners who themselves have the ability to evolve. Hilshaw Group has proven its ability to do so over the years and has its successes to prove it. We are delighted to have them as part of this monumental Kenyan dream.”

Separately, Keshoney said plans were underway to acquire additional 10,000 acres of land for a total of 15,000 between Athi River and Kitengela in neighbouring Kajiado County for the project.

He revealed project owners were already talking to football clubs in Nairobi to adopt a team that is already involved in association football. Tell is aware Kangemi All Stars Football Club in Westlands has been contacted, but details of the talks were unavailable.

“The ‘smart’ component of the Athi River project is being planned to be more adaptive in the face of future uncertainties,” according to Hilshaw Group chairman Lal Bhatia.

The Athi River Green Smart City the latest project intended to reset Nairobi as modern. About 10 kilometres northwest of Nairobi, there is the Tatu City. This is one is profiled as future “home to a self-contained community including commercial offices, retail spaces, restaurants, hotels and a green resort, golf course, schools, university, community centres, hospitals, sports, leisure and entertainment facilities in addition to residential units.”

“Tatu City is a 5,000-acre, new city with homes, schools, offices, a shopping district, medical clinics, nature areas, a sport and entertainment complex and manufacturing area for more than 250,000 residents and tens of thousands of day visitors. Schools and businesses are already open at Tatu City, and a range of houses suit all incomes,” it adds.

The other project known as Northlands City, is the Ksh500 billion ($5 billion) project owned by President Uhuru Kenyatta’s family. The ambitious real estate project that will result in an 11,000-acre mixed-use estate comprising residential, industrial, and commercial units hosting about 250,000 people.