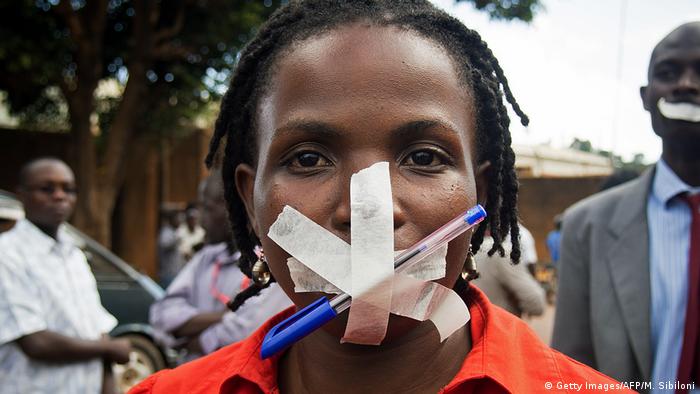 Muzzling the messenger: Why suppression of freedom of expression persists in Sub-Saharan Africa

Mancho Bibixy was pulled from his hideout in Bamenda, Cameroon, in the dead of night on January 17, 2017. In the years since the elite commandos of the Cameroon army dragged the Abakwa FM anchor away, his fiancée and son have said they lost all hope of seeing him regain his freedom.

Mancho Bibixy is now five years into a 17-year sentence at Kondengui Central Prison in Yaounde. His work at the most popular radio station broadcasting from the heart of the country’s crisis-torn English-speaking regions is what landed him in prison.

Abakwa FM takes a hard political line and gets tough on social issues. Mancho Bibixy was convicted of crimes against the state and spreading false information. In 2019, the authorities slapped two more years on to his original 15-year sentence after he complained about poor prison conditions.

Abakwa FM listeners can no longer tune in to get the lowdown from Mancho Bibixy. His editor at the station, Ndingana Raymond, said the imprisonment of the popular host has left a void.

“Macho Bibixy used to be a strong hand as far as this radio is concerned. He had some very interesting programmes that left an impact on the local community. That’s why he was referred to as ‘the fearless Mancho Bibixy’,” Ndingana told DW.

“On the comedy show, he handled serious issues with humour. His absence is really felt by the radio station. He left a vacuum that is yet to be filled.”

The practice of independent journalism has been under threat in Cameroon for years. Government surveillance and control tightened its grip on the media sector in 2014. New anti-terrorism laws that weighed heavily on the media were introduced, resulting in journalists increasingly fearing for their safety.

In February, Amnesty International wrote to President Paul Biya to question what it said was the arbitrary detentions in Cameroon. The human rights watchdog mentioned the cases of four reporters from the English-speaking Northwest region who are serving prison terms in Yaounde.

Tsi Conrad is an inmate at the same maximum security prison as Bibixy. The freelance journalist from the English-speaking regions was convicted on anti-state charges and jailed for 15 years in 2018. Tamfu Christopher, who worked closely with Tsi Conrad before his arrest, said the authorities had targeted the freelancer as a warning to others in the face of the anti-terrorism law.

“I can’t really imagine Conrad is still in detention.” Tamfu Christopher told DW. “The government is too generic in what she defines as terrorism. They want everyone to be mute and not to report anything. By keeping Conrad in jail all these years, has it stopped the truth from being told?

In March, the media regulator in Mali said it would suspend two French public broadcasters, Radio France International and France 24.

It came at the behest of Mali’s ruling military junta, which cited reports over alleged human rights violations by soldiers and Russian mercenaries as the reason for the suspension. The international media watchdog Reporters Without Borders has since made its mirror site available to enable people in Mali to view the content of the two broadcasters.

When Zambian President Hakainde Hichilema won the country’s August 2021 election, he immediately declared that he would enhance media freedoms. He would grant journalists easy access to himself, other government officials and institutions, and enact the country’s Access to Information (ATI) Bill.

DW asked members of the southern African country’s media: Has Hichilema made good on his promise?

“I’m one person who has felt the nudge of not being able to see a minister, where you are told you need to put it in writing, which is ridiculous! Those are the servants of the people. So, we should have free access to them,” broadcast journalist Felistus Chipako told DW.

The government now wants to take the ATI bill around the country for further consultations – a move that does not sit well with Lusaka-based journalist Lucky Sichula.

“These people [Hichilema’s government] promised to have this access-to-information bill enacted. Eight months down the line, they have taken it back for consultation, the consultations that have been done for more than 20 years. Nothing at all has changed,” Sichula told DW.

Felistus Chipako agreed that there was no need to subject the bill to further scrutiny. She did, however, credit the Hichelema government with the safer space opening in Zambia for journalists. Until he took office, journalists were harassed or arrested for criticising the government – and were often scared or uncertain in the line of duty, she told DW.

Emily Lukwesa, a sports journalist, said she feels it might be too early to make judgments on press freedom in Zambia today.

“Nothing much has changed for the media. Probably eight months is too early to observe how the media will be treated, but we hope that someone can look into improving the work conditions,” she said.

In Uganda, journalists who criticize the government are attacked or kidnapped, while President Yoweri Museveni even described journalists as “parasites” in 2018. Authorities have repeatedly prevented the broadcast of television reports, and threaten to shut down TV stations. A social media tax — the first of its kind in Africa – was introduced in 2018.

Guinea-Bissau’s government closed 79 radio stations nationwide in April after the expiry of a last-minute 72-hour deadline to pay license fees.

They fell silent. No information, no news — just dead air. Only nine out of 88 registered radio stations appeared at the Communications Ministry to renew their licences.

Others have since paid their fees, however their broadcasts are still suspended while they wait for the ministry to ensure their equipment is still operating within the terms of their licenses. Those that continue to broadcast without a valid licence could face up to three years in prison.

The aftermath of the attack on Radio Capital in Guinea-Bissau

Freedom of information in Guinea-Bissau is hanging by a thread, Diamantino Domingos Lopes, the general secretary of the Union of Journalists and Media Technicians, told DW. He called the situation “absurd.”

“The closing of the radio stations means that we have suffered another defeat in the fight for press freedom, after several armed attacks on stations critical of the government in the past,” Domingos said.

On May 2, journalists attending a conference hosted by the Media Institute of Southern Africa and UNESCO heard that journalists in Zimbabwe and South Africa encounter state surveillance.

The kingdom of Eswatini has seen frequent internet shutdowns in recent months, and as elections draw close in Lesotho and Zimbabwe, journalists in the region say they are expressing clampdowns on social media.

The scope of the media in many parts of Africa has broadened significantly in recent years, as the number of organisations dedicated to checking the facts grows. DW asked Rabiu Alhassan, the managing editor of GhanaFact, if fact-checkers are able to work unhindered.

“Fact-checkers are increasingly experiencing harassment in the course of our work. Verifying information put out by some of the powerful in society has exposed us to unwarranted abuse that comes at a cost to our mental health,” Alhassan told DW.

“We’re well aware of the public interest in our work and remain resolute in our pursuit to provide accurate information to the public while refusing to self-censor which is the ultimate goal of these attacks,” he added.

Only a few journalists are prepared to openly argue that the government of Rwanda is controlling the media to advance its own narrative. Most confide that they know they cannot express such views freely and are better off leaving a good impression on the government.

Rwanda’s major media houses favour the government, and are funded by the government. Independent reporters who use YouTube as their platform have been arrested, silenced and jailed.

“Rwanda’s freedom of the press is shrinking day by day. Free press means speaking truth to power without any consequences, but in Rwanda its not the case. Here you have to keep quiet to be safe or you speak what is good in the ears of government,” said one local journalist, who declined to be named for fear of repercussions.