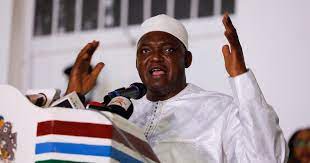 After two decades of dictatorship, The Gambia embraced democracy with President Adama Barrow’s 2016 election victory. But as is often the case in transitions from autocracy to democracy, stability remains elusive and economic growth insufficient to alleviate structural problems like high unemployment.

Barrow was re-elected in December 2021, and a crucial test for his second term will be to curb rising insecurity and crime.

Under Yahya Jammeh’s rule, communal clashes and crimes such as armed robbery, arson and banditry were uncommon in The Gambia. There was little political room for internal and external conflicts. Jammeh was notorious for “setting an example” with anyone believed to be threatening the country’s stability, especially those who challenged the security forces.

Human rights violations, state-sponsored summary killings and a lack of freedom of speech earned the country a “not free” categorisation in Freedom House’s political rights ratings between 2013 and 2016.

Jammeh’s authoritarian rule galvanised the opposition against him. Still, even after Barrow’s 2016 win at the polls, it took military intervention by the Economic Community of West African States Mission in The Gambia (ECOMIG) for Jammeh to accept defeat. He eventually fled to Equatorial Guinea, where he still lives.

Barrow’s coalition government embraced democracy and freedom of speech. Media houses can report critically on state matters without fear of arrest or killings. Citizens openly discuss national issues on social media platforms, and many Gambians in exile have returned. The country has climbed on the Freedom House rating from “not free” between 2013 and 2016 to “partly free” from 2017.

These are significant achievements, but discontent is growing about the government’s inability to maintain security in the country. In a recent nationwide survey by the Centre for Policy, Research and Strategic Studies, 76 per cent of respondents agreed that crime rates had either increased or increased rapidly in The Gambia since Barrow’s election in 2017.

Armed robbery, especially of wealthy business owners, has reportedly become common and banditry and murder are rampant in urban and rural Gambia, seemingly with few criminal justice consequences. It is common for people to go missing, and burglary cases are rising.

In 2021, the Gambia Democratic Congress raised concerns in a media statement about “the stunning growth in violent crimes and lawlessness in the country” since 2020. The opposition party questioned the government’s political will to deal with the problem. At the time, Barrow himself lamented the “disregard for the rule of law” in the country and acknowledged that crime was a threat to national security.

Localised conflicts have also been building. In 2017, the newly-elected Barrow government faced resistance to its deployment of ECOMIG forces in Foni – the region Jammeh was from. Civilian conflicts with ECOMIG forces stationed in Foni have resulted in one death and escalating tensions.

ECOMIG’s checkpoint in Bwiam village next to the Gambia-Casamance border has led to clashes that have affected local communities. The checkpoint is aimed at stopping illegal timber trafficking by rebels from the Movement of Democratic Forces of Casamance in Senegal’s Casamance region. In response, the rebels attacked an ECOMIG military base leading to the death of three Senegalese soldiers and the capture of seven others.

This has caused fear and the internal displacement of 2,464 people from 302 households in the Foni Kansala and Brefet districts, according to the International Federation of Red Cross and Red Crescent Societies. Foni residents live in constant fear of an incursion from the rebels along the long and porous border shared by The Gambia and the Casamance region.

Community conflicts, some deadly, arising from land disputes have also increased – for example between Gunjur and Berending villages in the West Coast region in March 2019. In June 2021, clashes between the Manduar-Mandinka and Manduar-Touba communities in the West Coast region over Alkalorship (village leadership) resulted in police intervention.

In the Serrahule communities of Upper River region, the caste divide between so-called royals and enslaved people has become another source of communal dispute since 2017.

The causes of rising insecurity are multifaceted. With youth unemployment at 12.4 per cent in 2019 and 48 per cent of Gambians living below the poverty line of $1.90 per day, many young people have resorted to crime. The response from the Barrow government has been weak. In many cases, the culprits remain at large. When arrests are made, prosecutions don’t follow and often family members manage to secure the release of suspects.

The police, generally under-equipped, have responded to the upsurge in crimes through various initiatives including the recent Operation Zero Crime. The operation targets criminal hideouts through increased patrols within the greater Banjul area and West Coast, but excludes most of rural Gambia.

Going forward, the government needs to invest in a more effective criminal justice system that can investigate crime and rapidly prosecute as part of broader ongoing security sector reforms. Border security must be tighter to prevent cross-border crime, and social cohesion promoted among divided communities.

The country also needs much more rapid economic growth. It should invest more in youth skills development through technical and vocational education programmes. It should also promote low- to mid-tech manufacturing industries through tax incentives and develop critical infrastructure that reduces the cost of doing business to spur private-sector growth.

Now that Barrow has been given a new five-year mandate, tackling rising insecurity and promoting economic growth should be prioritised.

Muzzling the messenger: Why suppression of freedom of expression persists in Sub-Saharan Africa