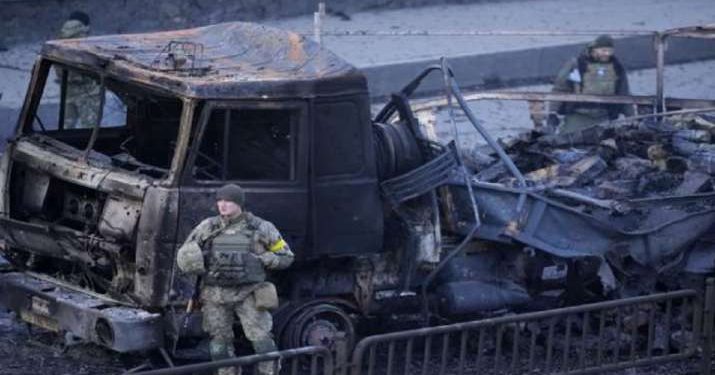 Russia has told Ukraine it is ready to halt military operations “in a moment” if Kyiv meets a list of conditions, the Kremlin spokesman says.

Dmitry Peskov said on Monday that Moscow was demanding that Ukraine cease military action, change its constitution to enshrine neutrality, acknowledge Crimea as Russian territory and recognise the separatist republics of Donetsk and Luhansk as independent states.

It was the most explicit Russian statement so far of the terms it wants to impose on Ukraine to halt what it calls its “special military operation”, now in its 12th day.

Peskov told Reuters in a telephone interview that Ukraine was aware of the conditions. “And they were told that all this can be stopped in a moment.” There was no immediate reaction from the Ukrainian side.

Russia has attacked Ukraine from the north, east and south, pounding cities including Kyiv, Kharkiv and the port of Mariupol. The invasion launched on February 24, has caused the worst refugee crisis in Europe since World War Two, provoked outrage across the world and led to heavy sanctions on Moscow.

But the Kremlin spokesman insisted Russia was not seeking to make any further territorial claims on Ukraine and said it was “not true” that it was demanding Kyiv be handed over.

“We really are finishing the demilitarisation of Ukraine. We will finish it. But the main thing is that Ukraine ceases its military action. They should stop their military action and then no one will shoot,” he said.

On the issue of neutrality, Peskov said: “They should make amendments to the constitution according to which Ukraine would reject any aims to enter any bloc.”

He added: “We have also spoken about how they should recognise that Crimea is Russian territory and that they need to recognise that Donetsk and Lugansk are independent states. And that’s it. It will stop in a moment.”

The outlining of Russia’s demands came as delegations from Russia and Ukraine prepared to meet on Monday for a third round of talks aimed at ending Russia’s war against Ukraine.

It began soon after Putin recognised two breakaway regions of eastern Ukraine, where Russian-backed separatists have been fighting Ukrainian government forces since 2014, as independent – an action denounced as illegal by the West.

“This is not us seizing Lugansk and Donetsk from Ukraine. Donetsk and Lugansk don’t want to be part of Ukraine. But it doesn’t mean they should be destroyed as a result,” Peskov said.

“For the rest. Ukraine is an independent state that will live as it wants, but under conditions of neutrality.”

He said all the demands have been formulated and handed over during the first two rounds of talks between Russian and Ukrainian delegations, which took place last week.

“We hope that all this will go OK and they will react in a suitable way,” Peskov said.

Russia had been forced into taking decisive actions to force the demilitarisation of Ukraine, he said, rather than just recognising the independence of the breakaway regions.

This was in order to protect the 3 million Russian-speaking population in these republics, who he said were being threatened by 100,000 Ukrainian troops.

“We couldn’t just recognise them. What were we going to do with the 100,000 army that was standing at the border of Donetsk and Luhansk that could attack at any moment? They were being brought U.S. and British weapons all the time,” he said.

In the run-up to the Russian invasion, Ukraine repeatedly and emphatically denied Moscow’s assertions that it was about to mount an offensive to take back the separatist regions by force.

Peskov said the situation in Ukraine had posed a much greater threat to Russia’s security than it had in 2014, when Russia had also amassed 150,000 troops at its border with Ukraine, prompting fears of a Russian invasion, but had limited its action to the annexation of Crimea.

“Since then, the situation has worsened for us. In 2014, they began supplying weapons to Ukraine and preparing the army for NATO, bringing it in line with NATO standards,” he said.

“In the end what tipped the balance was the lives of these 3 million people in Donbass. We understood they would be attacked.”

Peskov said Russia had also had to act in the face of the threat it perceived from NATO, saying it was “only a matter of time” before the alliance placed missiles in Ukraine as it had in Poland and Romania.

“We just understood we could not put up with this anymore. We had to act,” he said.

South African intelligence, police slammed for sleeping on the job as US Treasury slaps sanctions on terrorism financiers