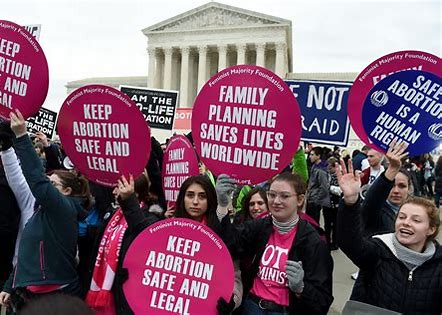 As the Supreme Court prepares to strike a blow against Roe v. Wade, it’s beginning to look like Republicans will make Obergefell v. Hodges their next target.

Republicans are never happier than when they’re bashing something they don’t understand, so the party’s current genitals-obsessed transphobia is totally on-brand. Attacking the trans community allows them to bully kids and people who strike them as different, which are two of their favourite pastimes, and this entirely manufactured panic allows them to include some of their other cherished activities like banning books and denying health care.

But as Florida’s “Don’t Say Gay” bill proves, the conservative counterreaction to tolerance and justice is broadening out once again to the entire LGBTQ community.

Now, as the conservative Supreme Court is poised to strike a blow against reproductive rights, it’s beginning to look like Republicans are hoping to make one of the crowning achievements of the LGBTQ movement, marriage equality, their next target. As Slate’s Mark Joseph Stern wrote recently, anti-LGBTQ forces never gave up the fight against gay marriage; they merely made a strategic decision to focus on trans rights. “Now that they are winning so many battles against trans equality, they are emboldened once again, and testing the waters for a rollback of marriage equality.”

One Republican senator, John Cornyn, jumped into those waters with both feet this week. In a speech Tuesday denouncing Supreme Court nominee Ketanji Brown Jackson – a speech, mind you, that was largely detached from anything she has said or done – Cornyn worked himself into a lather about Obergefell v. Hodges, the case that prohibited the states from denying marriage equality. He said that Plessy v. Ferguson, Roe v. Wade, and Obergefell were all examples of judicial activism and the court’s misguided application of substantive due process.

Lumping these three cases together is stupid. I don’t mean that as an ad hominem attack on Cornyn’s intelligence; I mean that, as a matter of law, these three cases have nothing to do with one another beyond “names of cases decided by the Supreme Court,” and trying to group them together makes Cornyn sound like a fool to anyone with legal training.

What links these cases in Cornyn’s mind is not the rights at issue nor the analytical tools used by the Supreme Court. What links them is that these are all settled precedents that have, or soon will be, overturned if Cornyn and his compatriots get their way.

The Supreme Court overturned 60 years of segregationist law by repudiating Plessy. This summer it will (most likely) overturn 50 years of settled law by repudiating or eviscerating Roe. Now, Cornyn has publicly expressed his hope that it doesn’t take the court that long to overturn Obergefell. He is basically saying that using a fire to burn a log, a house and a martyr is all the same thing, which makes sense only if you are a pyromaniac.

The Supreme Court might be listening. Obergefell was decided in a 5-4 ruling in 2015. From a purely political standpoint, the court now is a lot different from the court seven years ago. Obergefell’s author, Anthony Kennedy, has been replaced by alleged attempted rapist Brett Kavanaugh. Ruth Bader Ginsburg, who voted in the majority, has passed away and been replaced by Amy Coney Barrett.

Meanwhile, three of the original four dissenters are still there (Chief Justice John Roberts, Clarence Thomas, and Samuel Alito), while Antonin Scalia’s unhinged homophobia-masquerading-as-judicial-principle has been replaced by Neil Gorsuch. Conservatives likely have the votes now to do what they couldn’t do in 2015.

Beyond the raw politics of the thing, the conservative legal argument has also lurched rightward alongside the culture war being fought by MAGAs against a tolerant society. That’s probably why Republican Senator Mike Braun’s mask fully slipped off the other day. In a press call on March 22, he talked about his conviction that abortion should be left to the states. When he was asked if held the same view about Loving v. Virginia, the case that made state-level bans on interracial marriages unconstitutional, he said he did. He said that he thought such decisions about marriage rights should be left to the states.

Loving is a problematic case for conservatives because it does so many things. Its outcome prohibits bans on interracial marriage, an outcome most conservatives have to at least pretend to support. But it reaches that outcome by saying that the 14th Amendment’s equal protection clause confers social rights (and conservatives don’t like to admit that non-whites are entitled to social equality under the Constitution).

It further recognises that there’s a privacy right that protects people getting busy with their spouses (which conservatives don’t like to acknowledge because it leads to scary things like a right to birth control). Most of all, it rejects the “states’ rights” argument and instead elevates marriage to a fundamental right that is protected by the federal government.

Conservatives say they can accept the racial equality in Loving (whether you should believe them is a different question), but everything else pisses them off. And it is that everything else – the social rights, the privacy, and the fundamental right to marry – that has been deployed by Anthony Kennedy and liberals against the bigoted conservative position in gay rights cases (like Lawrence v. Texas, the 2003 case that ended anti-sodomy laws, over conservative objection), and Obergefell.

So when Braun says he wants to overturn Loving and put the issue of interracial marriage back to the states, he’s not primarily going after interracial marriage; he’s going after the legal ground that Obergefell and many other cases securing LGBTQ equality rest on. (Of course, it could be a “why not both” situation; I don’t know the man.)

Braun later walked the statement back (saying the quiet part out loud probably generated more heat than he expected), claiming that he “didn’t understand” the line of questioning. I generally have no problem believing that Republican senators don’t understand how “laws” or “the government” work, but I damn well think Braun understood this question. He understood it well enough to know that when he hears the word “marriage” he should start making noises about “states’ rights.”

These attacks may seem complicated, but they’re not subtle. The way Cornyn and Braun seamlessly went from attacking women’s rights to attacking LGBTQ rights is the same way that a red-state governor like Greg Abbott went from unleashing bounty hunters on abortion providers to ordering child welfare officials to investigate the parents of trans kids for abuse.

Or the way Ron DeSantis went from attacking trans kids to passing “Don’t Say Gay” legislation. LGBTQ rights, and marriage equality specifically, are the next thing these people want to take away after Roe. I wouldn’t put it past DeSantis or Abbott to push through a law directly challenging Obergefell or to order bounty hunters to sue same-sex couples, especially if either is trying to win a Republican presidential primary in 2024.

A GLAAD post-election 2020 poll found that 77 per cent of LGBTQ adult respondents were worried about Supreme Court rollbacks of marriage equality. That number, I’m afraid, may represent wishful thinking. Republicans could be coming for Obergefell next. Some Republican senators are even admitting it.

Kenya: Winning elections is always the goal, but violence, kidnappings, assault and death are never too far