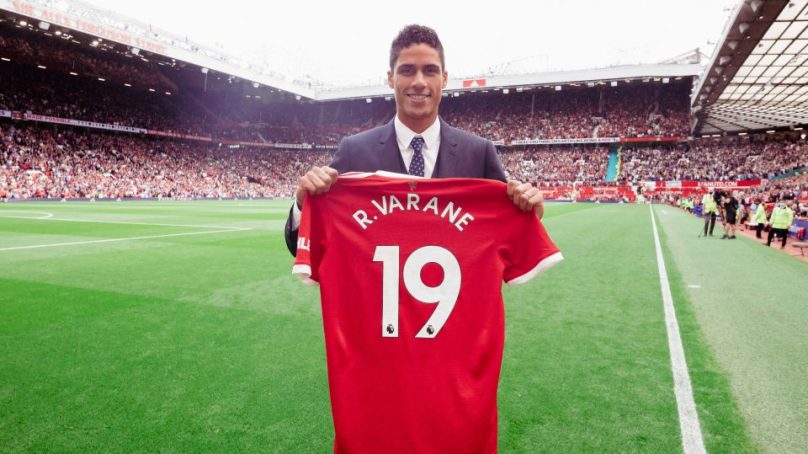 Raphael Varane received an outstanding reception as Manchester United’s new signing was paraded in front of a packed Old Trafford before their Premier League opener against rivals Leeds.

Having announced a deal had been struck to sign the France international on July 27, the completion of the 28-year-old’s signing has been delayed by the need for a visa, isolation and medical.

Such delays meant Varane missed Saturday’s clash with rivals Leeds, but United announced just before kick-off that he had signed a four-year deal for a reported £34 million ($42 million) fee, rising to £42 million ($57 million) with add-ons.

The France international was introduced to the crowd nine minutes before kick-off and met by a wall of noise when he emerged from the tunnel holding his United shirt with the number 19 on the back.

“Manchester United is one of the most iconic clubs in world football and the chance to come here and play in the Premier League is something I couldn’t turn down,” the 2018 World Cup winner said.

“There is a lot more that I want to achieve in my career and I know I’m joining a squad full of great players who will all have the same determination to win matches and trophies.

“Having spoken to the manager I can see how much progress has been made over the last few seasons and I now join a group ready to play at the highest level.

“I want to make an impact here and I will give everything to become part of this club’s illustrious history.”

Barcelona have announced the registration of Memphis Depay, Eric Garcia and Rey Manaj after coming to an agreement with Gerard Pique to reduce his wages.

The Spanish giants are still reeling from the departure of Lionel Messi, who joined Paris St Germain after the club were unable to honour a new contract because of financial restrictions.

Barcelona confirmed all of the three new players would be available for Sunday’s opening LaLiga fixture against Real Sociedad.

However, free signing Sergio Aguero, who left Manchester City at the end of last season, is still recovering from a calf problem and is set to be sidelined for up to 10 weeks.

A statement on the club website read: “Barcelona is able to register Memphis, Eric Garcia and Rey Manaj to play in the Spanish Liga de Futbol Profesional. This has been made possible thanks to an agreement with Gerard Pique whereby the Barca second captain’s salary has been substantially reduced.

“This means that all of the first-team players will be available for selection by Ronald Koeman for this Sunday’s opening Liga fixture against Real Sociedad.

“The club is also continuing to work with two of the other captains, Sergio Busquets and Jordi Alba, to adapt their salaries to the club’s current situation. It must be noted that both players are totally and utterly willing to cooperate.

“This summer, FC Barcelona has achieved a number of sales and loans with regard to its senior squad that have meant that all of the players can be registered for the start of the 2021/22 season.”