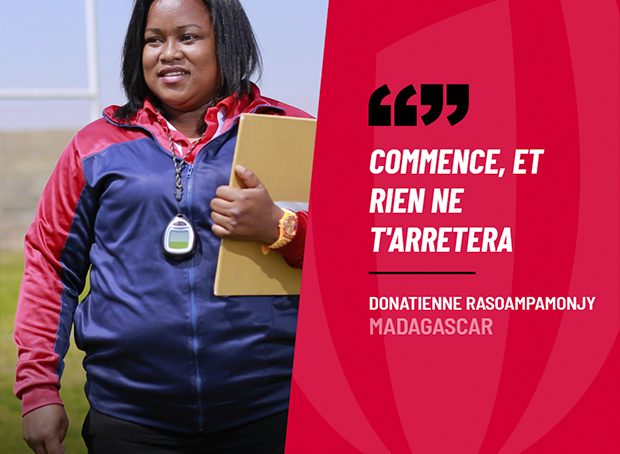 As the second largest island country off the east coast of Africa, Madagascar is packing with rugby heroine power in the name of Donatienne Rasoampamonjy, a Rugby Africa Unstoppable who is making waves in her hometown.

Handpicked amongst leading women in rugby on the African continent as part of Rugby Africa’s #Unstoppables, the regional technical advisor and coach trainer is trailblazing in the reputation of women in rugby.

The 30-year-old has been working tirelessly in driving the game since she traded in the basketball court for the oval ball when she was 17 years old.

“Since my childhood, I was very tall, I was always taller than other girls my age.  For three years, I focused on basketball, football and rugby before stopping the first two. My physical education and sports teacher actually convinced me to learn it and I realised that I felt more comfortable with rugby – it was a sport that suited who I am and the values of solidarity and integrity deeply resonated with me.”

However, it has not been an easy journey for Rasoampamonjy – who four years ago started a rugby club in her native village of Ambositra, in the island’s central Amoroni region. The club now has about 30 registered.

“Coming from a modest background, I ran into financial issues at university. That did not make me give up and I went on to complete my management studies course for rugby. Rugby taught me to persevere and dig deep into myself. If I did not have rugby as my support, I would not have been able to finish my studies.”

Later a national coach noticed her and convinced her to do a coaching internship. She quickly passed her level one and two certificates and was soon fully involved in the World Rugby GetiInto Rugby programme along with other educational programmes.

Currently, she is a high school sports teacher and a strength and conditioning coach, Rasoampamonjy reveals it was difficult in the beginning to bring rugby to the girls and even boys, many of whom support football.

“People think that it is dangerous for girls to play rugby. To dispel this myth, we organised festivals to showcase the talent of the girls, and it did not end there. I encouraged young people to practice every Saturday at the pitch and soon establishments on the outskirts wanted me to also teach them rugby. In addition, the physical and sports education teachers and sports coaches in the neighbourhood wanted to get into the Get into Rugby training.”

Out of her strong passion for the game, Rasoampamonjy continued her recruitment journey at no cost. With a lot of dedication, she soon persuaded local authorities to support and contribute to the development and realisation of local matches.

As part of her role to manage all the technical aspects in regional leagues, Rasoampamonjy says the mission was no longer to transmit knowledge to young players but to support knowledge and validate acquired knowledge.

With 22 regions in Madagascar and with each region having at least one club, the island supports 11 women’s leagues, including 14 women’s teams. Of this, 20 per cent of women participate in coaching and referee training.

Acknowledging that most have had a little time on the field, Rasoampamonjy said that she was intent on curbing the challenge of teenage pregnancy that distracts young women from getting on the greens and full time into the sport.

“The average age of pregnancy in Madagascar is 22-30 years old, while in the women rugby teams, it’s 16-25-year-olds. Most of the national rugby team players are mums and housewives while a larger remainder of young girls play football. My aim is to plant the oval ball in every public establishment, organise a minimal national tournament and increase the number of women managers, trainers, referees, physical trainers and trained players,” she says.

In addition, “I want to ensure that there is mutual trust between parents and myself. This can only come through the understanding of the values of rugby. The results are already showing for themselves. My 2021 goal is for the Malagasy 7-a-side national team to qualify for the Olympic Games. The women’s XV team will have adequate and appropriate preparation for the next international competitions.”