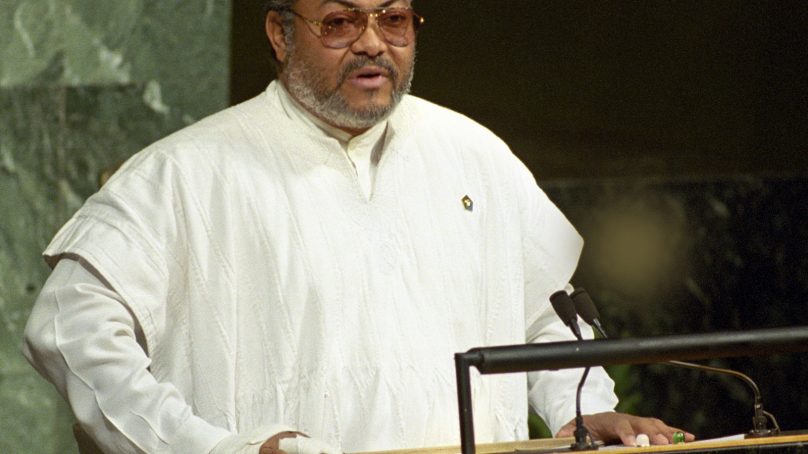 Former Ghana President John Jerry Rawlings has died. The curtains came down on Mr Rawling’s life on Thursday morning at the Korle-Bu Teaching Hospital in Accra.
Mr Rawlings is remembered for leading a military junta until 1992, before he later served two terms as elected president of Ghana. He resigned from the military in 1992 and founded the National Democratic Congress (NDC).
He was the first president of the Fourth Republic and was re-elected in 1996 for another four years. Thereafter, Rawlings backed his vice-president John Atta Mills to succeed him in 2000.
After leaving office, the African Union appointed Rawlings special envoy to war-torn Somalia to navigate the East African country out of more than two decades of conflict.
According to Ghanaian media, the former president breathed his last on November 12, 2020, after “a brief illness.” The state-owned Daily Graphic reports that the former president had been on admission at the Korle Bu Teaching Hospital for a week for an undisclosed ailment.
The death comes barely a month after Rawlings,73, lost his mother, who was aged 101 years.
The fallen leader was born on June 22, 1947 in Accra to a Ghanaian mother from Dzelukope near Keta, in the Volta region and a Scottish father. He went to Achimota School where he obtained his General Certificate of Education (GCE) ‘O’ Level in 1966.
He enlisted as a flight cadet in the Ghana Air Force in August 1967 and was subsequently selected for officer cadet training at the Ghana Military Academy and Training School, Teshie, in Accra. In March 1968, he was posted to Takoradi in the Western Region to continue his course. He graduated in January 1969 as a commissioned pilot officer. He won the coveted “Speed Bird Trophy” as the best cadet in flying and airmanship at the end of the training.
He earned the rank of Flight-Lieutenant in April 1978. He was an efficient officer with a close rapport with his men. During his service with the Ghana Air Force, he was angered by the deterioration of discipline and morale in the forces, which he argued reflected corruption of the regime of the Supreme Military Council at that time.
As promotion brought him into contact with the privileged classes and their social values, his awareness of the injustices in society was sharpened. He was thus regarded with some unease and suspicion by the SMC. He read widely and discussed social and political ideas with a growing circle of like-minded friends and colleagues.
On May 28, 1979, Flt-Lt Rawlings, together with six others was arraigned before a General Court Martial in Accra, charged with leading a mutiny of junior officers and men of the Ghana Armed Forces on May 15, 1979. There was strong public reaction, especially after his statement had been read in court, explaining the social injustices that had prompted him to act.
The armed forces, in particular, expressed deep sympathy with his stated aims. When he was scheduled for another court appearance on June 4, 1979, Flt-Lt Rawlings was spirited out of custody by sympathetic colleagues in the military. With the support of both military and civilians, he led a revolt, which decisively ousted the Supreme Military Council from office and brought the Armed Forces Revolutionary Council (AFRC) into being.
The AFRC, under the chairmanship of Flt-Lt Rawlings carried out a “house-cleaning exercise” aimed at purging the armed forces and society at large of corruption as well as restoring a sense of moral responsibility and the principles of accountability and probity in public life.
Meanwhile, following the programme already set in motion before the June 4 uprising for civilian administration, general elections were held.
On September 24, 1979, the AFRC handed over to the civilian government of the People’s National Party (PNP) under President Hilla Limann.
On December 31, 1981, Flt-Lt Rawlings, again, led a section of the armed forces to overthrow the PNP administration. A Provisional National Defence Council (PNDC), composed of both civilian and military members, was established, with Flt-Lt J.J. Rawlings as chairman.
Away from politics Rawlings was an avid reader, had an interest in building model aircraft, horse-riding and swimming.
He was married to Nana Konadu Agyeman-Rawlings with whom he had four children – three daughter and a son.
Flt-Lt Rawlings ceased to be a member of the Ghana Armed Forces on September 14, 1992. He formed the National Democratic Congress, which contested and won the 1992 presidential and parliamentary elections. He and the party again won the 1996 elections. His term of office ended in the year 2000.
Rawlings was the joint recipient of the 1993 World Hunger Prize. He holds an Honorary Doctor of Law Degree from Medgar Evers College, City University of New York and Lincoln University Doctorate Degree for Diplomacy and Development.

Taming Covid: Behind the frontlines of the Ebola wars