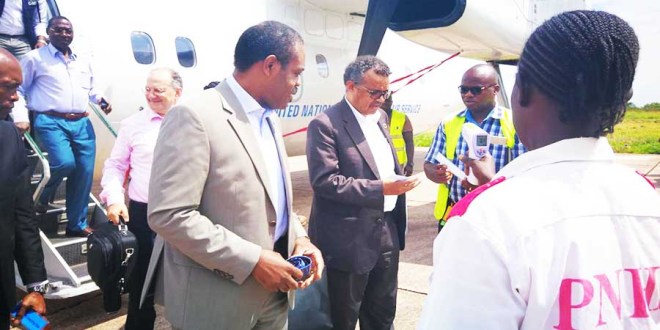 Taming Covid: Behind the frontlines of the Ebola wars

Tedros Adhanom Ghebreyesus concentrates on a map of a long-forsaken war zone in the north-eastern provinces of the Democratic Republic of the Congo (DRC). Ebola is gaining ground here and Tedros, the director-general of the World Health Organisation (WHO), needs to stop it.
He huddles in a dim corner of a mess hall with his officers on the frontlines. Their fingers dance across the map as they point to areas occupied by militia and explain how their teams struggle to circulate through these parts with vaccines and thermometers – key tools for limiting Ebola’s transmission.
As darkness falls, more WHO staff file into the hall at the United Nations compound in Butembo, a volatile city in North Kivu Province. The din of their conversations rises as a buffet of stewed meat, fried fish and plantains gets cold and some boxed wine grows warm. Eventually, Tedros, as he prefers to be called, ends the meeting with his top aides and announces that it is time to eat.
He settles into a chair at a table of young Ebola responders — mainly Congolese public-health specialists and physicians — and falls silent.
It was June and Tedros was facing pressure from all directions. The outbreak had already grown to be the second largest in history. And despite having a new Ebola vaccine and drugs to treat the disease, the death rate was soaring at 67 per cent because the therapies weren’t reaching everyone in need. Armed groups weren’t the WHO’s only challenge.
Many residents just didn’t accept that Ebola responders were there to help. A deep-seated scepticism of outsiders comes from more than a century of conflict, exploitation and political corruption in the region. And wars over the past 25 years have destroyed any semblance of a reliable, regulated health system.
“The outbreak of Ebola is a symptom,” Tedros explains. “The root cause is political instability.”
This explanation doesn’t satisfy health-policy analysts who observe the escalating outbreak — which has killed more than 2,000 people — and question the WHO’s ability to contain it. Their criticism comes just as the organisation is asking governments and philanthropists to give millions more dollars for the response. The WHO has more Ebola responders on the ground than any other international organisation because ongoing violence keeps many others at bay. The responders have faced death threats and stones, bullets and grenades.
Tedros had come to Butembo to hear about obstacles and to speak to leaders around the city about calming tensions so that his teams could work without harm. As he eats with the responders, he grows defensive on their behalf.
“They are working day and night,” he says. “Other groups come and stay for a few hours; they run when they hear one bullet fired.” He rests a hand on the shoulder of an epidemiologist sitting beside him. Her colleague, Richard Mouzoko, was shot dead at a hospital in Butembo two months earlier. “She’s taking the same risk Richard took,” Tedros says. “We are doing this to save lives.”