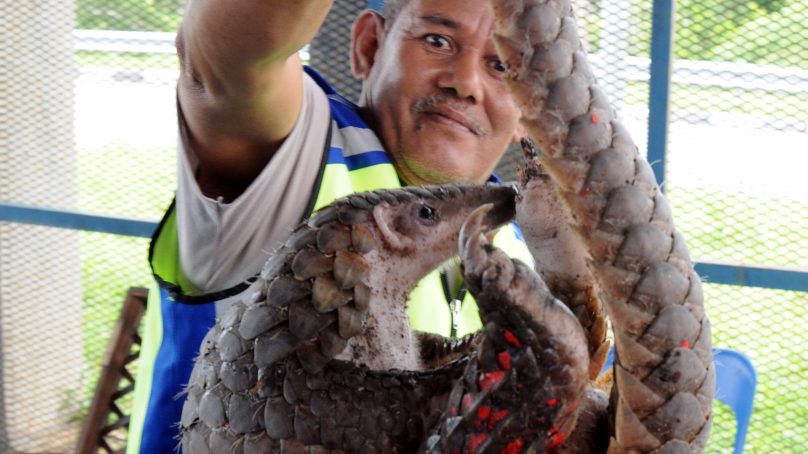 Customs officials in Singapore made a grisly discovery last April at a port on the island’s southern coast. Inside shipping containers supposedly transporting frozen beef from Nigeria to Vietnam, they found bloodstained sacks stuffed with 14 tonnes of scales stripped illegally from pangolins — scaly anteaters endemic to Africa and Asia.
The seizure, worth about $38.7 million, is thought to be the largest bust of pangolin products globally in recent years.
People hunt pangolins for their meat, considered a delicacy in Asia and for their scales, which are used in traditional Chinese medicine to treat ills such as arthritis. Eight species are now vulnerable or endangered. in 2016, more than 180 nations banned most cross-border commercial trade in them.
They did so under a major international agreement called the Convention on International Trade in Endangered Species of Wild Fauna and Flora, commonly referred to as Cites.
Trade bans on endangered species are the most severe restriction under Cites, which also limits trade in species that are at risk of overexploitation but not yet endangered, requiring permits for their export.
Conservation organisations hailed the pangolin ban as a big win in the war against the multibillion-dollar wildlife trade. But some scientists and wildlife trade experts worry that Cites bans — in this case and others — may be backfiring, by encouraging rather than suppressing trade in a species.
“As products become rarer, prices and demand increase. You just hit species all the way into extinction,” says Brett Scheffers, a wildlife ecologist at the University of Florida. Poorly policed trade controls can allow illegal trade to flourish, adds Michael ‘t Sas-Rolfes, a sustainability economist specialising in the wildlife trade at the University of Oxford.
In 1977, for example, an international trade ban on the black rhino led to a tenfold increase in the price of rhino horn over a two-year period, spurring poaching and driving populations to extinction in some areas.
And trade restrictions that began in 2013 on species of rosewood helped to make the precious timber the most trafficked group of endangered species in the world.
It’s too soon to know if the same kind of thing is happening with pangolins, but there are troubling signs, says Dan Challender, a conservation scientist specialising in pangolins and wildlife trade policy who works with ‘t Sas-Rolfes at Oxford. Challender says seizures of pangolin parts in high volumes appear to be on the uptick.
There’s no disagreement among researchers that the wildlife trade is a major contributor to the loss of biodiversity worldwide. Where they disagree is over what the countries that are signed up to Cites should do about it.
Many conservation groups say that Cites is one of the best tools they have — enabling signatory nations to ban international trade for species that are already endangered and set limits on trade for species at risk due to trade.
But trade experts like Sabri Zain, director of policy for TRAFFIC, a non-profit group working to make the wildlife trade more sustainable, say that Cites rests too heavily on bans when instead it is meant to help ensure that the wildlife trade meets people’s needs while also safeguarding nature.
“When you talk to people about Cites, the first thing that comes to their mind is trade bans. But the real heart of Cites is sustainability,” Zain says.
Critics also argue that countries don’t adequately apply science to assess whether Cites bans and quotas will work the way they are intended or make matters worse by sparking illegal trade. All these difficulties have left Cites gasping for breath, says ‘t Sas-Rolfes. “Cites,” he says, “is a terminally ill patient that is in need of serious attention.”
Cites was born in the mid-1970s out of public concern that countries were not adequately protecting rare and threatened species. The aim was to encourage governments to restrict imports from nations that lacked protections for plants and animals that are on the “red list” of threatened species as identified by the International Union of Nature Conservation, the globe’s leading authority on the state of the natural world.
Today, Cites is a voluntary agreement among 182 states as well as the European Union that protects more than 38,000 species of plants and animals to varying degrees.
To safeguard a species under Cites, a country makes its case for protection — to either ban or limit trade — at the Cites meeting held every two to three years. If two-thirds of member nations vote to approve the proposal, each country then creates laws and systems to implement it.
If trade is restricted rather than banned, countries will dole out a limited number of trade permits at levels deemed sustainable for safeguarding a species. Typically, trade restrictions are applied first but if they fail to help populations recover, countries can propose bans.
Legal trade in Asian pangolins dropped to near-zero in the 13 years after a Cites agreement to not export wild-caught pangolins from their native countries, a move that effectively banned international trade. But trade continued — illegally.
Clearly, action is needed. Roughly a million species are threatened with extinction, according to a major international study published last year. And trade and personal use by people is the second leading driver behind habitat destruction, the researchers found.
The devasting impact on global diversity from the harvesting of wild animals and plants makes Cites “one of the most important available tools to address the extinction crisis,” said Mark Jones, head of policy at the conservation group Born Free, and Alice Stroud, director of Africa policy at Born Free USA, in a statement to Knowable Magazine.
Once countries restrict or ban trade in a species, that species becomes a high priority for conservation in its native country, they wrote.

In a briefing note, the Cites Secretariat pointed to successes such as the recovery of the pirarucu, the world’s largest scaled freshwater fish at over three metres long and 220 kilogrammes in weight. Pirarucu populations plummeted in the Amazon basin in the late 1960s due to overfishing. Following Cites trade restrictions in 1975, community-led conservation and monitoring programmes helped the giant fish bounce back in some areas.
And at a meeting last August, Cites members agreed to relax a 50-year-old trade ban on an Argentine population of the delicately featured vicuña (Vicugna vicugna) — a cousin of the camel that is prized for its wool — after community-led conservation efforts had helped the species back on its feet.
Cites members also agreed that American crocodile (crocodylus acutus) populations in Mexico had sufficiently recovered following conservation and captive breeding programmes to allow some trade, which had been banned since 1975.
But bans and trade restrictions don’t always work as intended. For example, a 2010 trade ban on critically endangered European eels (Anguilla anguilla) — driven by culinary demand from China and Japan — hasn’t helped their chances of survival, recent findings show.
In 2019, an international anti-trafficking operation announced that illegal fishing is now a major factor in European eel declines, with up to 350 million eels smuggled from Europe to Asia each year.
And legal trade in the tiny Kleinmann’s tortoise (Testudo kleinmanni) skyrocketed in 1994, the year before a ban took effect. Some 2,800 individuals were sold, representing half of the species’ total estimated adult population.