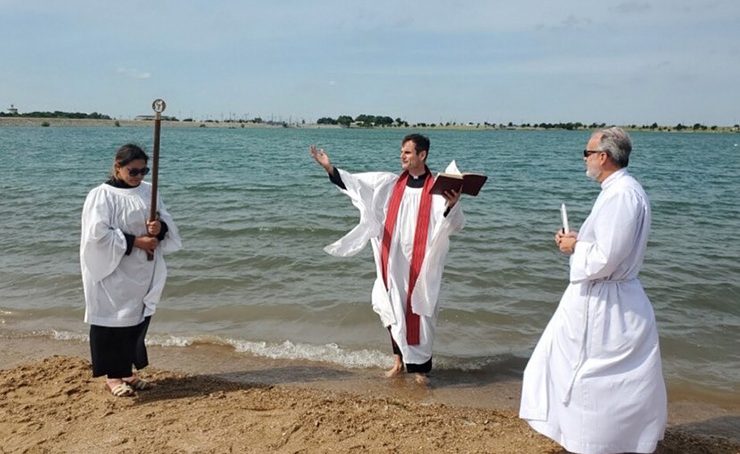 On a Sunday evening in September 1994, David Peters drove to a church service in Beckley, West Virginia, as the sun set over the horizon. He was 19 years old, just back from Marine Corps boot camp. He hadn’t been behind the wheel of a car all summer.

The road curved, and Peters misjudged the turn. Rays from the dipping sun blinded him. The car hit the median and headed straight at an oncoming motorcycle. And then, Peters says, “Everything went crash.”

His friend, sitting in the passenger seat, seemed fine. Peters got out of the car. The driver of the motorcycle was alive, but the woman who’d been riding behind him was now laid out on the pavement. Peters quickly realised she was dead.

Now an Episcopal priest in Pflugerville, Texas, outside Austin, Peters says there have been periods during the last 28 years when he’s found the knowledge that he killed someone almost unbearable. “I felt like I wasn’t good anymore,” he says. At times, he even wished he were dead. Years after the accident, he purchased a motorcycle, thinking “that’d be sort of justice if I died on a motorcycle.”

Peters may have experienced what some psychologists and researchers have begun to call “moral injury,” a concept introduced by a psychiatrist to describe the devastation he witnessed in Vietnam War veterans and others who believed they’d been ordered to act in ways that violated their personal moral code.

The term encompasses a constellation of signs and symptoms that go beyond mere guilt and shame and can be so severe that people lose a sense of their own goodness and trustworthiness, leading to drastic impacts on daily functioning and quality of life.

Moral injury results from “the way that humans make meaning out of the violence that they have either experienced or that they have inflicted,” says Janet McIntosh, an anthropologist at Brandeis University who wrote about the psychic wounds resulting from how we use language when talking about war in the 2021 Annual Review of Anthropology.

Although research on moral injury began with the experiences of veterans and active-duty military, it has expanded in recent years to include civilians. The pandemic – with its heavy moral burdens on healthcare workers and its fraught decisions over gathering in groups, masking and vaccinating – intensified scientific interest in how widespread moral injury might be.

“What’s innovative about moral injury is its recognition that our ethical foundations are essential to our sense of self, to our society, to others, to our professions,” says Daniel Rothenberg, who codirects the Centre on the Future of War at Arizona State University.

Yet moral injury remains a concept under construction. It is not an official diagnosis in psychiatry’s authoritative guide, the Diagnostic and Statistical Manual of Mental Disorders (DSM). And until the recent publication of a major study on the subject, researchers and clinicians lacked well-defined criteria they could use to determine if someone has moral injury, says Brett Litz, a clinical psychologist at VA Boston Health Care System and Boston University.

“The prevalence of moral injury is utterly unknown, because we haven’t had a gold standard measure of it,” he says.

Moral injury was first described by Jonathan Shay, a psychiatrist in Boston, who defined it as a sense of “betrayal of what’s right, by someone who holds legitimate authority (in the military — a leader), in a high-stakes situation.”

In his 1994 book, Achilles in Vietnam, Shay quotes a soldier whose platoon fired on people at the beach one night, having been told by commanders that their targets were unloading weapons. But when daylight came, the soldiers realised they’d killed a bunch of fishermen and their children.

“So it starts working on your head,” the soldier told Shay. “So you know in your heart it’s wrong, but at the time, here’s your superiors telling you that it was okay.” Incidents like this, Shay argued, are not just upsetting, but also damaging.

As the years passed, some researchers felt that Shay’s definition focused too narrowly on betrayal by leaders or country. In 2009, Litz and colleagues expanded the definition to include more personal types of moral injury, such as the lasting impact of “perpetrating, failing to prevent, bearing witness to, or learning about acts that transgress deeply held moral beliefs and expectations.”

In a 2019 study, researchers devised a list of potentially morally injurious events to civilians by reviewing previous literature and research, as well as consulting experts and people who suffered from memories of morally distressing events.

The researchers came up with 31 events that seemed to distress people enough to lead to moral injury, including a car accident while texting, sexual assault, working within a corrupt organisation, witnessing abuse of power at work, cheating on a romantic partner and stopping providing for dependent children.

But not everyone reacts to troubling events in the same way, and not everyone who experiences a particular event will suffer a moral injury, says study co-author Matt Gray, a clinical psychologist at the University of Wyoming. What really makes a difference, he says, is “people’s moral framework and their appraisal of their actions or inactions.”

Because such actions and encounters can be traumatic, people with moral injury may appear to have post-traumatic stress disorder. But a diagnosis of PTSD does not capture the entirety of this kind of suffering, Shay and therapists who came after have found.

Many researchers view PTSD and moral injury as distinct conditions, although they overlap in their symptoms and the types of events that trigger them. PTSD is characterised by anxiety that develops after a serious physical threat of injury, sexual violence or death. But that triggering event doesn’t necessarily have to be morally injurious – it could be a natural disaster, say.

For moral injury, on the other hand, the triggering event is always morally injurious but it may or may not involve a physical threat. It could be something like causing financial distress to others due to a gambling addiction.

Both conditions can involve intrusive memories of the traumatic event, avoidance of reminders of the event, lack of interest in pleasurable activities and detachment from others, Litz and colleagues wrote recently in Frontiers in Psychiatry (some researchers have categorised the overlapping symptoms differently).

But moral injury is more likely to lead to other symptoms, Litz says, including alterations in self-perception, loss of meaning and loss of religious faith.

The two conditions may have different effects on the brain. In a 2016 study, active-duty military personnel seeking trauma treatment were asked to lie in a darkened room with their eyes closed for 30 minutes, after which they underwent a brain scan. Those who had been traumatised by a physical threat exhibited elevated resting neuronal activity in their right amygdala, a part of the brain associated with emotional responses, particularly fear.

But those who were haunted by something they did or witnessed had more activity in their left praecuneus, a part of the brain that is related to sense of self.

Over time, the moral injury research lens has expanded to include non-military populations such as police officers, teachers, refugees and journalists.

One 2019 study, for instance, surveyed teachers and other K-12 professionals in an urban Midwest school district, where some schools were white and affluent, some were racially and economically mixed, and others were largely made up of impoverished students of colour.

The less affluent and the more segregated the students, the more likely the teachers were to experience moral injury, writes the study’s author, Erin Sugrue, a social worker at Augsburg University in Minneapolis.

“Professionals in these schools may experience moral injury as they come into close contact with the impact of racism and income inequality, two inherently immoral social forces, on the daily lives of their students.”

From Covid stress, to downtime and recovery: How health workers are coping with post-pandemic ‘emptiness’