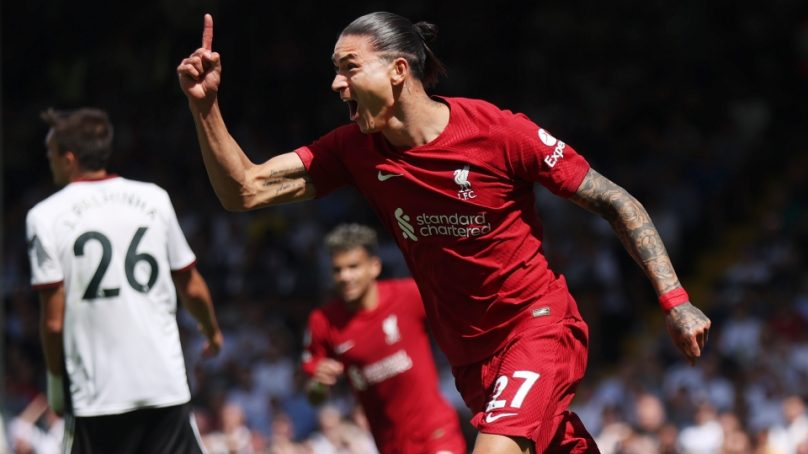 Liverpool were forced to come from behind twice and grind out a 2-2 draw with newly-promoted Fulham in their opening Premier League fixture. But the Reds’ most expensive player in history, Darwin Nunez, delivered the first equaliser off the bench on his top-flight debut and then set-up Mohamed Salah for the second.

Marco Silva’s Fulham were excellent value for their point and many would argue the Cottagers deserved more against a lacklustre Liverpool side. Speaking on commentary for TalkSPORT, ex-Premier League midfielder Andy Townsend said, “Rarely have I seen Liverpool so outgunned in terms of energy in the Premier League, very, very rarely, but that’s what we saw in the first-half.”

Townsend added at full-time, “Liverpool got away with that. They scrambled a point by their standards. They will get better, they have to, but they were on the ropes for much for the game, they were second best. They had one or two moments but never showed control and energy-wise Fulham refused to be second-best.”

The Whites raced out of the blocks in the first-half and got the goal their dominance deserved when Mitrovic climbed above Trent Alexander-Arnold at the back post on 32 minutes.

Townsend said, “Mitrovic has attacked that so perfectly and Fulham deserve that lead. That is a brilliant Fulham goal.”

Nunez’s introduction just after half-time did little to stem the flow of Fulham pressure and Neeskens Kabano came so close to doubling the hosts’ lead when his fierce shot cannoned off the post. But Nunez would have his say. After backheeling a close-range effort at Marek Rodak, the Uruguayan tried the trick again and bundled a Salah cross into the net thanks to a little help from Tosin Adarabioyo.

Townsend said, “It’s a bizarre goal actually – Tosin appears to have jabbed the ball back onto Nunez’s heel and the ball goes in off the Liverpool man.”

The pendulum appeared to be swinging in Liverpool’s favour but it was Fulham who regained the lead, albeit in controversial fashion. Mitrovic beat Virgil van Dijk in the box and took a tumble to win a penalty, although some have questioned the amount of contact on the Serbia striker.

He duly converted the penalty on 72 minutes, but Nunez and Salah would combine once again to deny Fulham a dream start to the season. This time, it was Nunez putting it on a plate for Salah after a high ball dropped in the box.

Jordan Henderson threatened to break hearts at the death when his long-range effort looked destined for the top corner but bounced back off the crossbar – and a draw was the least Fulham deserved.