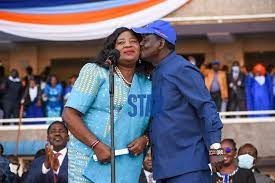 After more than two years of waiting, opposition leader Raila Odinga has finally announced he will make a fifth stab at the presidency, sparking excitement and fear in equal measure across Kenya, which was treated to a carnival mood at the venue of the party’s convention at a 60,000-capacity stadium in the capital, Nairobi.

Excitement is informed by belief among his legion of militant and expressive supporters who now believe Odinga now has a realistic chance of becoming Kenya’s fifth president because of the heavy financial and logistical backing he is receiving from the government that has earned him derisive monikers – ‘Government Project’ or ‘Uhuru Project’.

Fear on the other hand has been building up in the camp of his main opponent and Deputy President William Ruto, who had hitherto been on a rollercoaster, boasting that he had the youths in his column.

Ruto has been selling the ‘Hustler Nation’ ideology – an amorphous economic take-off model he is promoting that is underlined by the wheelbarrow. The wheelbarrow is the mode of transport and the springboard of his envisaged economic regeneration.

Consequently, Odinga’s declaration sets him up against the deputy president, who has been on the stump since the last – disputed – election in 2017 to succeed President Uhuru Kenyatta, who still has just under eight months to the August 9, 2022 General Election.

Odinga is also expected to face one of his former allies in the defunct National Super Alliance that powered his campaign against Kenyatta in 2017. These are Amani National Alliance’s Musalia Mudavadi, Ford Kenya Moses Wetang’ula and his running-mate in 2013 and 2017, the Wiper Democratic Party Kalonzo Musyoka.

The trio, who had been invited to grace the occasion, steered clear of the convention, saying it was Odinga’s to enjoy “his moment in the sun.”

In a social media message, Mudavadi said, “Raila Odinga is a worthy competitor, I wish him well because tomorrow will clearly be his day in the sun.” however, there is talk of imminent exits from the One Kenya Alliance (OKA) that holds the key to the possibility of a re-run the next presidential poll.

Odinga used the daylong ceremony to give the country sneak-preview of his social and economic agenda, laying emphasis on ethic and cultural coexistence against the backdrop of economic and political turbulence in the Horn of Africa and Central Africa, which are in the throes of conflicts and leadership crises that have far-reaching impacts on regional peace and security.

In his 10-point manifesto to propel Kenya into a newly-industrialised nation, the former prime minister promised, “I firmly believe that the idea of devolution in Kenya has the transformative potential of rich mineral mines, abundant oilfields and other traditional markers of a nation’s affluence. ‘One County, One Product’ programme is designed to be a launch-pad to a Kenya which consumes its products, exports excesses and registers surpluses, not deficits.”

In what some critics have described as “routine” promises that are predictably shelved after ascending to power, Odinga – the most famous political detainee in independent Kenya – promised free education and Ksh6,000 ($55) monthly stipend to two million vulnerable households in a country teeming with more than 25 million unemployed youths in a population nearly 50 million.

“Education is a non-negotiable. This programme will be an aggressive scheme to ensure that all, not some of our children, get a rightful access to quality education. We will deploy a new army of teachers to deliver to our children,” he said.

The same promise has been by successive governments since independence, but little has changed in terms of quality and the need to narrow the pupil-teacher ratio, according to former Odinga political and economic advisor Joseph Simekha.

Simekha says the manifesto was designed to appease billionaire Kenyans who re bankrolling his bid for power after controversially losing to former President Mwai Kibaki in 2007 and his successor – Kenyatta – in 2013 and 2017.

Another routine pledge is a quasi-affirmative action to propel women up the economic ladder. This is despite the fact that the government and opposition have failed to fully implement a section of the 2010 Constitution that provides for gender equity in public service appointments.

He promised, “This will focus on the true multipliers of wealth in our community; our women. The programme will unlock access to financing for women-led businesses and provide support for women on other enabling factors such as access to assets for production, land tenure and proportional representation in all government levels.”

The agenda is deemed a rehash of the outgoing president’s agenda, who made similar promises in the 2013 and 2017 campaigns, but the cash set aside for women and youth economic empowerment programmes were regularly syphoned by government functionaries.

Despite Kenya being one of the sources of River Nile – Africa’s longest river and world’s second largest river after the Mississippi in America – access to clean drinking water remains a challenge.

In Vision 2030, the country’s development Marshall Plan, the government prioritised access to “water for all” by 2020 – a feat that remains a pipedream to-date as the country is ravaged by droughts precipitated by frequent weather extremes. The weather vicissitudes in the form of droughts and torrential rains often result in food insecurity and catastrophic flooding.

More than half of the Kenya population lacks access to safe and clean drinking water and for agriculture, nearly six decades after independence despite an abundance of water bodies and reliable rainfall.

“The programme will radically reverse the artificial shortages and high cost of water, particularly for the poor. We shall not allow water scarcity to be an issue in a country like ours where lakes and rivers burst their banks, yet desert nations have found ways to direct every drop to its people for consumption and production. Water must and will be the least of every Kenyan household’s worry,” he said.

A member of Raila’s legal team Steve Ogolla, is of the opinion is the ODM leader is being strategic and will adjust his priorities once he assumes offices. Ogolla, an advocate of the High Court, recalls that the ODM leader has a history of changing strategy at every election. And by embracing the hitherto hostile Mt Kenya region and President Kenyatta’s Kikuyu community, Ogolla says Odinga wants to rope in the support that has always been elusive since he first contested for presidency in 1997.

Since the ad hoc Mt Kenya Foundation embraced Raila following the thawing in relations between and his erstwhile political nemesis – President Kenyatta – there has been suspicion locally and among development partners that the usually firebrand opposition leader had been compromised by the ruling elite that also controls the reins of power and economy to go slow on flagrant economic crimes.

It is not coincidental that after the handshake credited for cooling the embers of ethnic animosity in the country, economic crimes and abuse of office are no longer a preoccupation of the political class.

The condensed manifesto mentions corruption just once, with a promise to comprehensively address the subject before he launches his campaign officially – 90 days before the elections.