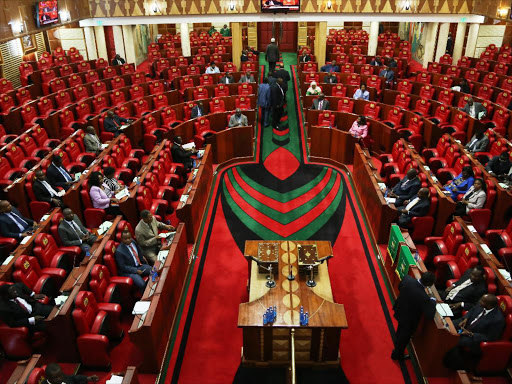 Cracks that at first looked fleeting when Kenya’s opposition boycotted repeat presidential election in 2017, when the National Super Alliance began to experience turbulence leading up to late filing of the petition that cancelled the result, are widening.

Consequently, there are concerns that the disintegration of Nasa and his party may have exposed Raila Odinga to further uncertainties following the acrimonious divorce with former allies in the defunct National Super Alliance (Nasa).

The feuding that has now permeated his own Orange Democratic Movement (ODM) is expected to further ravage the party unless Raila cedes ground to accommodate divergent opinion on the contentious structure and texture of a constitutional amendment that will alter the composition of government, if passed by Parliament.

Already, the bicameral House that was on recess has been recalled and from Wednesday last week the two chambers have been debating the Building Bridges Initiative (BBI) Bill that proposes to expand the size of the executive and the legislature. The amendment faces a difficult time in both the Senate and National Assembly after ODM leader Raila Odinga’s legal team led by Siaya Senator James Orengo and Rarieda MP Otiende Amolo questioned “new” content in the Bill they say would substantially affect the 2010 Constitution.

A faction in government led by Deputy President William Ruto is concerned the changes will lay the groundwork to repeal presidential term limits and pave way for President Kenyatta, 61, to remain in power beyond August 2021 when his second term ends.

The amendment Bill, however, has given a fillip to the discontent that had been building up after Raila, allegedly secretly secured cooperation deal with President Uhuru Kenyatta, who the Supreme Court declared been irregularly decaled winner in the August 8, 2017 presidential election.

It has been reported that Rarieda MP Otiende Amolo, after the humiliation in Siaya, raised concerns about how the party had invested trust in “a small Somali” (in reference to Suna East MP Mohammed) and other party leaders “who are misleading him.”

Tell can authoritatively report that after Raila was forced to move to court to challenge the election of Kenyatta, the frosty relations between him and his ardent supporters in the party was on the rocks. Dr Amolo, Mr Orengo and Prof Okong’o Omogeni took issue with Raila’s reluctance to challenge the results and openly complained about “being used by a leader who is not interested in the top seat.”

The complaints came on the back of Raila reportedly quashing Mudavadi’s push to petition the presidential election outcome.

Raila had on his part been already negotiating for a government of national unity, a move that had been mooted by former US ambassador to Kenya Robert Godec before Orengo, Amolo and Omogeni sided with Mudavadi, Kaonzo and Wetang’ula, some of the leaders who attended the meeting at Okoa Kenya offices say.

Mudavadi, Kalanzo and Wetangula have in the past accused Raila of sealing a pre-2017 election agreement with Kenyatta to “lose”, then agree to “work together”, something that incensed his close allies led by Orengo and Amolo.

The latest pointer to rocky relationships in ODM, a constituent party of Nasa, is a terse message posted on Facebook by Raila’s Communications Director Dennis Onyango, who told Senator, MP Amolo and Omogeni to call time in politics. The Facebook post initially looked innocuous and quite inconsistent with the teamwork and camaraderie associated with Raila’s inner circle.

“The demagogues have had their years, indeed decades, discussing politics in flawless English on the floor (of parliament) and public rallies. It is time for a different path,” Onyango’s post reads.

When Tell reached Mr Onyango for clarification, he confirmed the post was genuine and Raila was ready for a divorce. He could pinpoint the source of the rift. The rift, though, is being celebrated by opponents of the BBI Bill.

Gatundu South MP, an ally DP Ruto, responded to Mr Onyango’s post with sarcasm: “Dear Mr Raila Odinga. It is now clear we have ODM led by Junet, Mbandi &Opiyo Wandayi and ODM Asili led by Orengo, Otiende Amolo and Okongo Omogeni. If you need help souring out this mess you have my number.”

The emerging rift in ODM is reminiscent of the 1997 when Orengo and current Kisumu County Governor Peter Anyang Nyong’o broke ranks with Raila, then leader of National development Party (NDP), to team up with Charity Ngilu in quest for presidency. They performed abysmally, falling far behind Raila who came forth to eventual winner Daniel arap Moi. Mwai Kibaki was second, Charity Ngilu third, Raila Odinga forth and Michael Wamalwa Kijana fifth.

The falling out in 1997 between Raila and Orengo was described by political scientist Katama Mkangi as sociological as their disagreement was neither political nor ideological. Mr Onyango was reluctant to put a finger on the cause of the rift other than their opposition to the BBI-based Constitution amendment Bill, which Orengo as co-chair of the team that drafted final the document that is being debated by Parliament.

“So hard to understand (why they are opposed to Raila). He (Orengo) was co-chair with (Amos) Kimunya of the committee that produced the Bill. The very bill he is opposing,” explained Onyango. The other member of the committee was Prof Okong’o Omogeni, who too expressed reservations about the Bill before Parliament.

Instructively, the three lawyers were instrumental in organising the evidence of election irregularities that had been captured by a tallying centre that belonged to Mudavadi. Neither ODM and Nasa had poll tallying centres and relied on the evidence collected by ANC centre in Westlands.

The other Nasa co-principals were Ford Kenya’s Moses Wetang’ula and Wiper’s Kalonzo Musyoka. The three have previously told of how they struggled to convince Raila to challenge the loss to Kenyatta. It was until Orengo, Amolo, Omogeni broke ranks with Raila and joined the Mudavadi group that Raila relented and allowed the petitioned to be filed.

Raila was reportedly willing to play ball with Uhuru in a scheme that was conceived and being executed by foreign embassies in Nairobi. It can be recalled that the filing of the petition began less than 15 minutes to the midnight deadline because was already sold to the proposal of a government of national in which he would be a key player.

Orengo in particular was reportedly incensed that Raila had turned opposition politics into a “business” he uses to cut deals for his family and close relatives. The Siaya senator, allegedly, lambasted Raila for denying the opposition a chance to form a government when at first declined to petition his loss and later refused to participate in the repeat election ordered by the Supreme Court. The law bars a party from fielding a different candidate in the event election results are nullified.

During debate on the BBI Bill, Orengo, Omogeni, Amolo and Ruaraka Tom J. Kajwang expressed strong reservations about the modalities that will be used to carve out 70 new constituencies from the current 290 constituencies. Their reservations and calls for amendment to the Bill that its framers have rejected any changes – ‘not even a comma – are said to raised fears that it might give advantage to the ruling Jubilee Party faction allied to Deputy President William Ruto, that is opposed to the amendments.

How long are we in Africa going to use our hardships as excuses not to move forward?