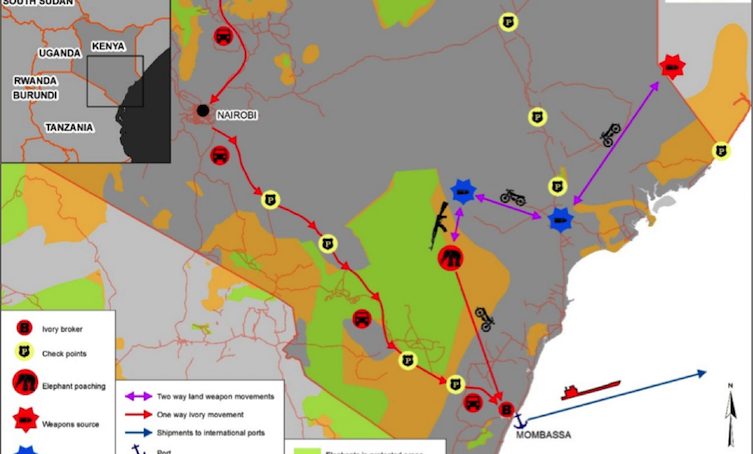 Pummelled on multiple fronts around the world, terrorist organisations and insurgent groups in eastern Africa have been finding it difficult to keep alive their militia activities. After the funding taps running dry, the groups resorted tapping natural resources to fund insurgencies, says Earth League International, a conservation organisation, in a new report published last week.

The report titled Ivory and terrorism: Africa’s White Gold of Jihad is an outcome of more than 10 years being on the trail of the illicit trade and details how poaching and wildlife trafficking, especially ivory and rhino horn, are key sources of funding for terrorist groups – including al-Shabaab, the al-Qaeda-backed Somali terror group, the Lord’s Resistance Army (LRA) of Joseph Kony and the Darfur’s Janjaweed militia.

The proceeds from exports f illicit ivory, rhino horns and minerals are used to pay militias and acquire sophisticated weaponry. In the case of Al Shaabab, charcoal and banana exports to the Middle East through Kismayu port fetches hefty sums of money that keeps the insurgency inside and outside Somalia alive.

As Al Qaeda-supported Al Shabaab launched incursions into Kenya between 2010 and 2012, investigators Nir Kalron and Andrea Crosta embarked on tracking the militia group’s source of funding and discovered how poaching and illicit trafficking in ivory, rhino horns and minerals keeps the insurgencies alive.

The investigators, using a unique network of contacts developed during their years as security and intelligence consultants, to collect first-hand information and assess the entity of this specific traffic beyond anecdotes and rumours.

“The picture they got was tragic for the elephants and very worrying for all of us…After several meetings with traders, traffickers, poachers and even ex-warlords, they found an indisputable financial trail between the illicit trade in ivory and al-Shabaab,” the investigation reveals.

In the illicit movement of the ivory and rhino horns, Al-Shabaab acts as a middleman, filling orders from agents in end-user countries in Asia or the Gulf states.

“It (investigations) confirmed that the terrorist groups pay better than average prices, making them desirable buyers of illicit ivory from small-medium brokers,” according to investigators.

Somali sources in Kenya, told the investigators that in 2010-12 Al-Shabaab used to buy up to three tonnes of ivory every month. The traffickers are protected by highly placed governments officials, police, regional administration and some Members of Parliament from the Somali community in Kenya.

Instructively, the Somali MPs in question have been opposed to the police using drones in north-eastern Kenya to track down ivory smuggling, for fear that drone footage would unearth illicit trade of contraband goods that find their way into Kenya through Somalia would be exposed.

“Based on these investigative efforts, we estimated that in that period up to three tonnes of ivory was smuggled from Kenya to Somalia every month and then shipped to Asian countries through Somali ports or loaded onto ships waiting offshore, even directly from the Kenyan coastline,” Nir Kalron and Andrea Crosta report.

“When taking into account the massive scale of elephant poaching and ivory trafficking occurring in East Africa alone in 2009-2012 (and in the years preceding this investigation) coupled with a generally unconcerned political establishment,” they observe “trafficking up to three tonnes of ivory each month was a very realistic estimate given the political instability in the region, the availability of ivory, and the growing demand/value of ivory in those years.”

The published and widely circulated findings from this investigation generated a significant amount of interest from public and private groups, both in terms of positive feedback and cynical scepticism.

“One specific claim that we made – that al-Shabaab partially funded their activities from proceeds generated by trafficking ivory – was sharply criticised but has also subsequently been proven by other entities and in some cases is the primary rationale for a more targeted focus on this illicit activity by governments,” the investigators say.

The investigators, however note that there exists other far “more substantial sources of profit for al-Shabaab – such as charcoal – but through this investigation, we simply exposed an important regional player that contributed significantly to ivory trafficking, at that time, and that the funds generated from this illicit activity were enough to partially fund al-Shabaab’s operations.”

The geo-political situation in that part of the world is very different now than it was between 2010 to 2012, which was the context and timeline in which this report was investigated and prepared.

Militias and terrorist organisations do not drive elephant poaching and ivory trafficking, but they certainly do play a role then, according to the findings.

International political and conservation arenas are finding that they continue to do so now, as is evidenced by the emergence of militia groups in northern Mozambique and northeast of the Democratic Republic of Congo with links to Al Shaabab.

Cybersecurity: No time for Africa to bury head in sand or pay for skilled foreigners