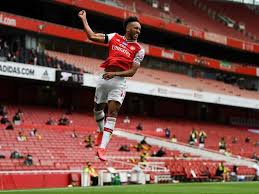 Juventus’ stance over signing Arsenal hitman Pierre-Emerick Aubameyang has been revealed after a transfer with Everton cleared an important hurdle.

Juventus are on the hunt for fresh faces at the spearhead of their attack. The exit of Cristiano Ronaldo to Man United has left them with a huge void to fill.

A recent report revealed the Turin club had agreed a very specific deal to cut short Moise Kean’s nightmare stay with Everton on Merseyside. The Italian forward struggled to adapt to the English game, resulting in his loan spell with PSG last season.

The 21-year-old impressed under the bright lights in Paris, and Juventus duly took note. A two-year loan deal that could become permanent pending certain conditions was reportedly struck. Sky Sports reported the total cost of the move will be around £17 million ($23.3 million).

Now, trusted journalist Fabrizio Romano has provided a positive update on proceedings. He tweeted Kean’s medical has been “completed”. A deal is officially “set to be announced” soon, with Juventus now swiftly turning their attentions to further signings.

However, despite reported interest in Arsenal striker Aubameyang, Romano claimed he will not be pursued. In a second tweet, Romano declared that neither Aubameyang nor fellow forward options Eden Hazard or Sergio Aguero will be targeted.

Aubameyang had been speculated to be an option to help replace Ronaldo’s goals by Italian outlet Tuttomercatoweb.

Meanwhile, West Ham are reportedly close to sealing the £25.8 million ($35.5 million) signing of CSKA Moscow attacking midfielder Nikola Vlasic in a deal that Everton will profit from.

Vlasic has been outstanding since leaving Everton for CSKA, scoring 33 goals and contributing 21 assists in all competitions.

The Guardian adds that David Moyes now believes Vlasic is ready for another shot in the Premier League. Vlasic’s proposed move to the London Stadium will be good news for Rafael Benitez’s Everton.

The Toffees are due a sell-on fee they inserted in the deal that saw him leave in 2019. According to the Express earlier this year, the Blues are entitled to a “small unknown share.”