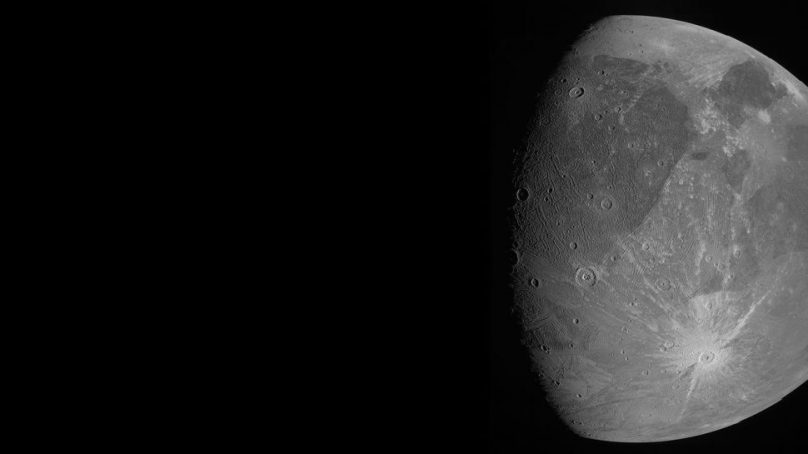 On June 7, NASA’s Juno probe zoomed within just 1,038 kilometres of Jupiter’s enormous satellite Ganymede, which is bigger than the planet Mercury. It was the closest any probe had come to Ganymede since May 2000, when NASA’s Galileo spacecraft got within about 1,000 km of the moon’s icy surface.

It’ll take some time to receive and process all the data from the June 7 encounter, but we’re already getting a taste. The first two photos from the flyby have come down to Earth and NASA posted them online June 8.

One of the images, snapped by the JunoCam instrument, shows nearly an entire side of the crater-pocked Ganymede, which is thought to harbour a huge ocean of liquid water beneath its ice shell.

That ocean is likely sandwiched between two ice layers, however, so it’s not as astrobiologically interesting as the subsurface seas of fellow Jupiter moon Europa and the Saturn satellite Enceladus. Those other buried oceans are in contact with their moons’ rocky interiors, making a variety of complex chemical reactions possible, scientists say.

The JunoCam photo, which has a resolution of about 1 km per pixel, was captured using the instrument’s green filter. The image is black and white, but the mission team will be able to create a colour portrait once the versions taken with JunoCam’s red and blue filters come down, NASA officials said.

The second photo comes courtesy of the Stellar Reference Unit, a black-and-white camera that Juno uses for navigation. This image, which features a resolution of 0.6 to 0.9 km per pixel, shows the side of Ganymede opposite the sun, which is faintly illuminated by light bouncing off Jupiter.

“The conditions in which we collected the dark side image of Ganymede were ideal for a low-light camera like our Stellar Reference Unit,” Heidi Becker, Juno’s radiation-monitoring lead at NASA’s Jet Propulsion Laboratory in Southern California, said in a statement.

“So, this is a different part of the surface than seen by JunoCam in direct sunlight,” Becker said. “It will be fun to see what the two teams can piece together.”

This image of the dark side of Ganymede was obtained by Juno’s Stellar Reference Unit navigation camera during its June 7, 2021, flyby of the moon.

This image of the dark side of Ganymede was obtained by Juno’s Stellar Reference Unit navigation camera during its June 7, 2021, flyby of the moon.

Juno launched in August 2011 and arrived at Jupiter in July 2016. The solar-powered probe is studying Jupiter’s composition, interior structure and magnetic and gravitational fields, gathering data that should help scientists better understand how Jupiter and our solar system formed and evolved.

Juno occasionally turns its sharp eyes toward other objects in the Jovian system – like the 5,268 km-wide Ganymede. Observations made during Monday’s flyby could reveal key insights about the moon’s composition, ice shell and radiation environment, among other characteristics, NASA officials said.

Such data could help inform and guide future missions to the Jupiter system, including Europe’s Jupiter Icy Moons Explorer (JUICE) spacecraft, which is scheduled to launch in 2022 to study Ganymede and fellow Galilean moons Europa and Callisto up close.