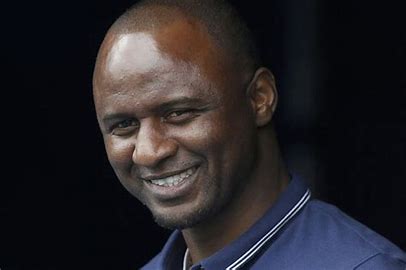 It’s crystal-clear, new manager Patrick Viera has to make the gods of football at Palace happy

Patrick Vieira was last week appointed Crystal Palace manager and if history is anything to go by, he will have to do better than Dutchman Frank De Boer, who shown the door five matches into the 2017 season.

Having spent time in England as an Arsenal and Manchester City player, Vieira is acutely aware of what lies ahead of him: improve the fortunes of the 119-year-old club. For him to sail through the first season, the gods of football must be happy.

In 2017, Crystal Palace replaced one of the most experienced managers in Premier League history with somebody who had never managed in England before. Frank de Boer, Sam Allardyce’s replacement, was sacked after five games.

In 2021, Crystal Palace have replaced one of the most experienced managers in Premier League history with somebody who has never managed in England before. So will Patrick Vieira fare better than De Boer did after replacing 73-year-old Roy Hodgson?

Vieira, 45, has managed two teams to date – New York City in the USA and Nice in France’s Ligue 1. At one stage, the legendary former Arsenal midfielder looked as if he was being groomed to be Manchester City’s next manager. Instead, his Premier League chance has come at Selhurst Park.

He was born in Dakar, Senegal, to parents from the Cape Verde Islands. Vieira is a grandson of a man who served in the French army, making him eligible to play for France.

How has Vieira’s managerial career gone so far? Vieira has a fair bit of managerial experience in those two jobs – 90 games with New York City and 89 with Nice.

He left NYC out of choice for the Nice job but was sacked by the French side in December and has not worked at a team since. He is currently an ITV pundit at Euro 2020.

The Frenchman did not win a trophy in charge of either side – but that is hardly a prerequisite for a job at Crystal Palace, who have not won any of English football’s current major trophies in their 116-year history, although they did lift the now defunct Zenith Data Systems Cup in 1991.

Vieira ended his playing career at Manchester City in 2011 – and started his coaching career there, first in a youth development role and then as manager of their reserve team.

After four years, he went to manage New York City, a sister club of Manchester City. At that stage he was being strongly touted as a future Manchester City manager, perhaps taking over at the end of Guardiola’s three-year contract, with his spell in Major League Soccer almost seen as part of his training.

He won more MLS regular-season games than any other manager during his time in the US, but his side lost in the play-off quarter-finals in both his full seasons in charge – including 7-0 on aggregate to Toronto in 2016.

In May 2018, Guardiola extended his contract at City for another three years, meaning that job was not going to be available any time soon.

On top of that, Vieira’s failure to get past the first round of the play-offs with squads including Frank Lampard, Andrea Pirlo and David Villa cast doubts on his ability.

Less than a month after Guardiola’s new deal, Vieira left the City stable of football clubs to take charge of Nice in his homeland. Expectations were relatively low there, with a top-half finish the main expectation – and they finished seventh in his first season in charge.

The following campaign was even better as they finished fifth, with the league season halted after 28 games because of the Covid pandemic. But he was sacked midway through season three after five consecutive defeats, with the club knocked out of the Europa League and 11th in Ligue 1. In that time, only four Ligue 1 managers won more games or earned more points than he did.

He was known for his attractive style of football with NYC but his spell with Nice – a European club without the best players in the league – might  be more relevant to Palace.

Some of the criticisms of his time at Nice included a lack of creativity, issues with recruitment and failure to find his best team and stick to it. There were reports he had lost the dressing room and the fans had turned against him too.

Vieira was part of a bid to buy Arsenal this summer, along with fellow Gunners legends Thierry Henry and Dennis Bergkamp and Spotify billionaire Daniel Ek – but their bid was rejected.

The World Cup winner – who was only Palace’s third choice at best after moves for Nuno Espirito Santo and Lucien Favre fell through – takes over a team in huge transition.

Eleven first-team players’ contracts expired this summer and only 18 players are left, including some with long-term injuries or work-permit issues.

Frank de Boer was called the “worst manager in the history of the Premier League” by Jose Mourinho in 2018. De Boer had no experience in English football when he took over at Palace in 2017. He was sacked after just five games, including four defeats.

Vieira won three Premier League titles and four FA Cups with Arsenal and another FA Cup with City. He was in the Professional Footballers’ Association’s Premier League team of the season seven times and was the player of the year in 2001.

On top of that, he has coached in England with City and in his first interview as Palace manager, he spoke of his excitement at the “project” at Selhurst Park, including plans to develop the academy.