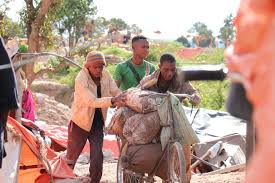 The huge mining agency where Albert Yuma Mulimbi is chairman was nationalised and renamed under President Mobutu Sese Seko after Congo gained independence from Belgium in 1960. Gécamines once had a monopoly on copper and cobalt mining and, by the 1980s, was among the top copper producers in the world. Jobs there offered a good salary, health care and schooling for employees’ families.

But Mobutu, who ruled for 32 years, raided its funds to support himself and his cronies, a pattern followed by his successors, according to anti-corruption groups. By the 1990s, production from Gécamines had declined dramatically. Money wasn’t reinvested into operations, and the agency amassed debt of more than $1 billion. Eventually, half of its work force was laid off.

To survive, Gécamines was restructured, turning to joint ventures with private, mostly foreign, investors in which the agency had a minority stake.

Yuma, a long-time power broker in the Democratic Republic of Congo and chairman of a government agency that works with international mining companies to tap the nation’s copper and cobalt reserves, took over in 2010, promising to return Gécamines to its former glory.

But instead, according to anti-corruption groups, mining revenues soon disappeared. The US-based Carter Center, a non-profit, estimated that between 2011 and 2014 alone some $750 million vanished from Gécamines’ coffers, placing the blame in part on Yuma.

The room was packed. Top White House and State Department officials, mining executives, Senate staffers and other Washington elites sat rapt one day in 2018 at the DC headquarters of a foreign policy group as the microphone was handed to the guest of honour: Yuma.

“We understand President Donald Trump’s desire to diversify and secure the US supply chain,” he said, speaking to the Atlantic Council. “It would be of our best interests to consider partnerships with American companies to develop projects for the supply of these minerals.”

Accused at home of pillaging the country’s revenues, Yuma had taken his image-cleansing campaign abroad, seeking redemption by convincing Washington that he was a critical link to Congo’s minerals and metals.

Yuma’s team of lobbyists and lawyers included Joseph Szlavik, who had served in the White House under President George Bush, and Erich Ferrari, a prominent sanctions lawyer.

Lodging at the Four Seasons, he held meetings on two trips that spring with officials from the World Bank and the Departments of Defence, Energy and the Interior. He also travelled to New York, where he met with Donald Trump Jr.

There, he was accompanied by Gentry Beach, a Texas hedge fund manager who was a major campaign fund-raiser for the former president as well as a close friend and erstwhile business partner of the younger Trump. Beach has been trying to secure a mining deal in Congo, and was previously invested with Trump in a mining project there. He did not respond to requests for comment.

“Someone wanted to introduce me to say hello,” Yuma said, playing down the exchange with the president’s son. Through all the encounters, Yuma said, he recited the same message: American needed him, and he was ready to help.

In Washington, he even offered what he considered crucial intelligence about Russia’s efforts to acquire Congolese niobium, a shiny white metal that resists corrosion and can handle super-high temperatures like those found in fighter jet engines. Yuma said he had helped thwart the sale to benefit the United States, according to two American officials involved in the meeting.

Signs of trouble emerged during one of the trips. A member of his lobbying team was pulled aside by a State Department official and given a stark warning. Yuma was now a target of a corruption investigation by the United States, and he was about to be punished.

A few weeks later, in June 2018, the State Department formally prohibited him from returning to the United States.

“Today’s actions send a strong signal that the US government is committed to fighting corruption,” the State Department said in a statement at the time that did not name Yuma and instead said the actions involved “several senior” officials from Congo, which The Times confirmed included Yuma.

For Yuma, the action signalled that he needed even more muscle. He would hire Herman Cohen, a former assistant secretary of state for African affairs under Bush, and George Denison, who had worked for President Gerald Ford.

A former Congolese airline and telephone executive named Joseph Gatt, who lives in Virginia and is close to Yuma, also took up his cause. Gatt stationed a personal aide at the Fairmont, a luxury hotel about a mile from the White House, who organized meetings with the lobbyists to push for permission for Yuma to visit the United States.

“He’s a very formidable person,” Gatt said of Yuma in an interview, insisting that the allegations against him were false and that he was “quite clean.”

At the same time, Yuma worked on elevating his standing in Congo. He hatched a plan with the exiting president, Kabila: Yuma would act as his proxy by becoming prime minister, State Department officials told The Times.