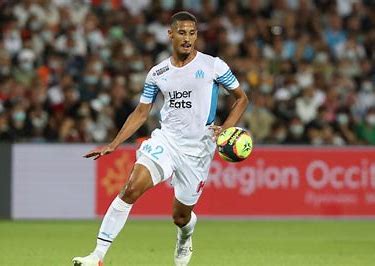 William Saliba has vowed to prove his mettle at Arsenal in a declaration that suggests he has softened his hard-line stance on returning to his parent club this summer.

The defender, 21, enjoyed a brilliant season on loan at Olympic Marseille and was crowned the Young Player of the Season in Ligue 1 after making 52 appearances in all competitions. He suggested he was keen to extend his stay in his native France in May as this would allow him to play Champions League football next season.

The young defender joined the Gunners from Saint-Etienne three years ago in a headline-grabbing £30 million ($37.5 million) transfer, but is yet to make his competitive debut. Upon taking over from Unai Emery, Mikel Arteta deemed the centre-half not ready for the rigours of English football and has sent the defender out on loan twice over the course of the last two-and-a-half years.

After impressing at Nice, Saliba looked destined to be given an opportunity last season, but a lack of European football, allied to the arrival of Ben White in a £50 million ($62.45 million) deal, saw Arteta opt to farm Saliba out on loan again, this time to Marseille.

However, Arteta now insists Saliba “has to come back” to the Gunners ahead of the 2022-23 campaign, meaning manager and player may have been at loggerheads over the latter’s future. That being said, in a fresh update, the centre-back appears to have decided to return to the Emirates and fight for his place in the squad.

Speaking to Telefoot, the France international defender said, “I belong to Arsenal, I still have two years left. I will be back with Arsenal. I have played zero matches and I still want to show them my true face and have the chance to play for these fans and this great club. But it doesn’t just depend on me. In any case, to leave like this, would be a shame.”

Saliba confessed he was somewhat apprehensive about joining Marseille but insists he has matured during his 12 months at one of France’s biggest clubs and revealed they will always have a special place in his heart.

“Surprising…or magical,” he said when asked to use one word to describe his spell as Marseille. It’s my first full season. I was keen to show who I really am. It’s a very positive assessment and really, I’m very happy with my season. And that’s why I had this little lump in my stomach saying to myself: “Here you go to a club and you mustn’t laugh, you mustn’t have fun, you must play every game thoroughly. It’s as if I stayed at least two or three years, it’s really special. Even if I don’t come back to Marseille, I’ll never forget. Thanks to OM, I spent a great course in my career and it was they who boosted me.

He is yet to make a senior appearance for the North London club and is desperate to change those three years on from his £27 million arrival from St-Etienne.

“I belong to Arsenal, and I still have two years there,” Saliba told TF1 , according to Get Football News France.

“I will be there for pre-season with Arsenal. I have played zero matches with Arsenal and I want to show them what I’m made of and have the chance to play for the supporters and for this big club.”

Affirming his dedication to the Gunners, he added: “In any case, leaving like that (without proving himself by playing) would be a shame.”

Saliba’s comments suggest he will be battling with Gabriel and Benjamin White for a place at the heart of defence next season. Arteta is pleased with how regularly he played for Marseille and believes this more than justified the decision to send him out on loan.

Saliba has enjoyed a highly successful season at OM and helped Jorge Sampaoli’s side secure Champions League football, while he was named Ligue 1’s Young Player of the Year.

The lure of Europe’s elite club competition led Saliba to suggest last month that he wanted to remain at Marseille, but Arteta insisted the plan was always to give the player an opportunity to impress at Arsenal.

And Saliba is now ready to accept the challenge of proving himself to Arteta and force his way into his manager’s plans for next season.