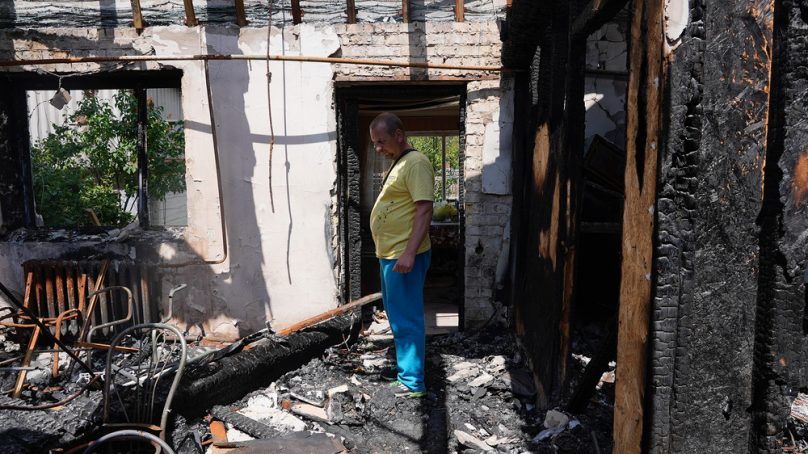 Beneath the calmer facade of Ukraine major town and the capital Kyiv is a wake of death and destruction. Forty-six out of 69 towns and villages were impacted in the region, according to the government.

In towns like Bucha and Irpin, civilians were slaughtered, their bodies left on the road; women were raped; and people were detained in basements, at times for weeks. In many less-well-chronicled places, like the village of Moschun, nearly all the residential houses are also damaged or razed to the ground.

In February, two missiles struck Vadym Zherdetsky’s home, tearing the roof off, destroying the rest of it, and nearly killing four of his family members inside. The 51-year-old, who was lauded for fending off four Russian tanks armed with just a rifle when they entered Moschun, said returning to his village in April was more daunting than being there during the fighting.

“It was scarier to come back than to be here during combat,” he said. “There was the smell of burnt wood everywhere.”

Zherdetsky had spent $270,000 building his home – using his life savings – hoping it would one day be a place for his 10 grandchildren to live. Now he has to start again from scratch, only he can’t because he has run out of money due to the war. Building materials from the government and aid groups haven’t arrived, and he says banks won’t give him a war loan because they still deem his area to be an active conflict zone.

The government has created a digital application where people can take photos of their damaged homes and submit it to be assessed for compensation, but payments have yet to start and any large-scale reconstruction effort seems a long way off.

“I don’t think we’ll have enough [building materials] in the near future,” said Oleksiy Kuleba, head of the Kyiv region military administration. “Our ports are closed. We don’t have much production of our own, so the only way is getting materials from Europe.”

For people living in villages like Moschun, rebuilding their homes is just one of many concerns. Approximately 300 people – out of some 2,500 – have returned since the Russians left. Stores don’t have much food as the Russians cut the electricity, while residents say they’re receiving little international aid and local assistance is drying up.

“We’re getting less food and less deliveries,” said Larysa Lishchynska, head of Public Beam of the Future, a local aid group operating in Moschun and nearby towns.

“It’s not sufficient for people.” Lishchynska’s organisation distributes food and other essential assistance, relying on a network of friends to provide goods. But much of the volunteer support has now moved east and there are fewer resources for small towns. Lishchynska said her group used to run food distributions in the area daily, but now they’re only happening weekly.

“Despite the willingness of responders to connect,” there’s a disconnect in Ukraine between the international humanitarian system and local aid groups, according to a May 25 report from ACAPS, which provides independent humanitarian analysis.

Local volunteers, who shoulder much of the aid response burden and fill the gaps where other groups aren’t always present, said they want international organisations to trust them more and to make it easier for them to collaborate by reducing the onerous bureaucracy and paperwork required for funding.

Lishchynska said her teams reached out to international organisations to partner with, but they were shut out. “They said they’re afraid to work with us,” she said. “They say they don’t trust us and will work with the government instead.”

While the UN acknowledges the need to work with local partners, it said it doesn’t have a system in place that can help volunteer groups do more since many of these organisations aren’t officially registered, meaning there’s no due diligence on the group or its operations.

“We have a lot of volunteer organisations, they could do more, they know the ground, they are from there, they know the people who are in need,” said Esteban Sacco, Ukraine head of office for the UN’s emergency aid coordination body, OCHA. “So how [can we] help them to continue what they’re doing or even to expand? So we are trying to find out how we can do that… [but] we’re not going to find an answer in the next coming weeks.”

Ukraine horrors: Without accountability, some agencies take ‘safari’ so their teams can get something to tell donors